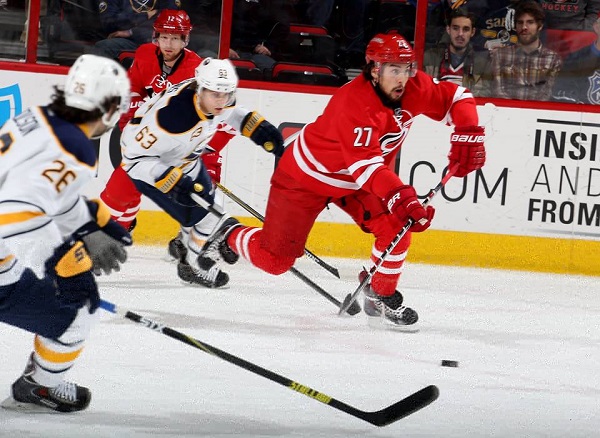 Raleigh, NC — A Cary Caniac said, “We need to play the Buffalo Sabres more often; they make us look good.” Sure enough, the Canes beat the Sabres 5-2 on Thursday, January 8, 2015 at the PNC Arena in a game that saw good things all over for the Canes.

The score could have, or should have, been a wider margin on both ends, as the Canes had ample scoring opportunities. On the defensive end, Cam Ward, who has been playing “lights out” for going on three months, had one of those “I wish I had that one back” goals on the Sabres’ second scoring.

The first period was a forgetful one for both teams, and it could only be defined as sluggish. With all the hype about the top two draft prospects in the June draft, it looked as if both teams were making sure that they wanted to be in a solid position for #1 or #2.

At least the Canes appeared to be trying harder, as they clearly dominated the play and got off twice as many shots–10-5–forcing Jhonas Enroth to make some key saves to keep the Canes scoreless in the first. Both Ward and Enroth, along with Anton Khudobin for that matter, are all playing very well this season but have had no support on the offensive end.

Both Enroth and Ward made point blank saves within a minute of each other and, as a result, gave the impression of another low scoring game.

Canes Have Four Goals in the Second

Canes’ coach Bill Peters must have had some choice words during the first intermission, as the Canes came out on fire in the second. Every player seemed to have an extra step and the Canes were, no doubt about it, the more aggressive and talented team.

Around the five minute mark, in one of the many changes the coaching staff made, Jeff Skinner took a face-off–which is unusual for Skins. He won the face-off and passed over to Riley Nash along the boards. Nash passed to Tim Gleason on the left point, and Gleason quickly went cross-ice at the blue line to Ryan Murphy.

Murph settled the puck and then sent what initially looked like an unwise pass to Alex Semin who was covered in the high slot. Semin snared the pass then did a pirouette around his defender and sent a sweet, smooth pass to Skinner’s tape. He pushed the puck in for a very pretty-looking goal after every Cane skater touched the puck.

The Lead was Short-Lived

The lead was short-lived as the Sabres scored on a turnover by the Canes at their own blue line on a good move by Philip Varone. For the first time this season, the Canes took advantage of a five-on-three man advantage with two Sabres in the box.

The Canes methodically worked the puck up top when Justin Faulk passed to Nathan Gerber on the low goal side. Gerber passed to Jiri Tlusty in the sweet spot in the slot who then sent a one timer in off Enroth’s pads to give the Canes a 2-1 lead.

Just three seconds after the power play was over, Murphy passed to Eric Staal along the boards behind the goal. Staal carried the puck behind the net and then made a strong pass out-front that bounced off a defender’s skate into the net for a commanding 3-1 lead.

Right after the next faceoff, with the puck deep in the Sabres’ end, a defender tried to clear the puck–but Semin snagged the puck out of the air to keep it alive for the Canes. Faulk corralled the puck at the right point and tossed it towards the goal as impressive rookie Victor Rask tipped it in the air.

The change of directions fooled Enroth and gave the Canes their fourth goal of the period.

The Sabres closed the gap in the third on a goal that came just as a Canes penalty ended. Varone was camped out to Ward’s left, and he tipped the puck with his stick at what appeared to be exactly the height of the goal with the puck going between Ward’s pads.

Ward can’t be blamed, as Varone shouldn’t have been that open. Shortly afterwards, Tlusty used his speed to bring the puck in the Sabres’ end, catching the opposing team flat-footed. Tlusty sent a soft pass to Faulk, whose slap shot was blocked by Enroth.

Riley Nash was in the dirty arc of the crease, and he made a nice play by gathering the puck, putting it on his forehand, and sweeping it around Enroth’s leg for the final score.

Finally, a game in which the Canes had all players healthy and all areas working on all cylinders to take advantage of a team that really did look like they were suffering. The Canes’ PK (penalty kill) team has been perfect in the past seven games, not allowing a goal leading the NHL in the category since the beginning of December.

The next home game is Tuesday, January 13, 2015 against Colorado. It should be another test against a fairly weak team coached by the unpredictable Patrick Roy.