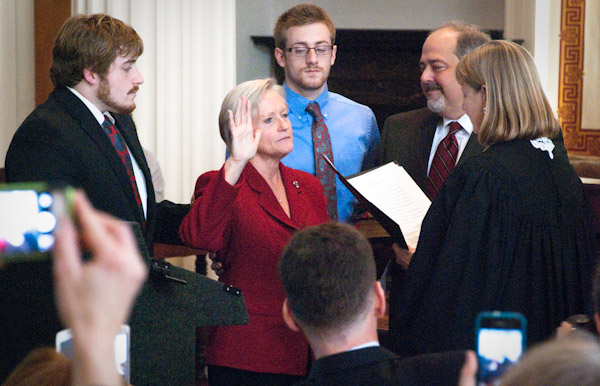 Raleigh, NC — The afternoon was bright and chilly as about 100 people gathered to witness Gale Adcock of Cary take the oath of office to represent District 41 in the North Carolina General Assembly.

Gathering at the Old State House

I was glad for my scarf as a cold wind raced across the grounds of the Old State Capital. But the sky was sharp and clear, with an eye-squinting brilliance you only get on dry, winter days. 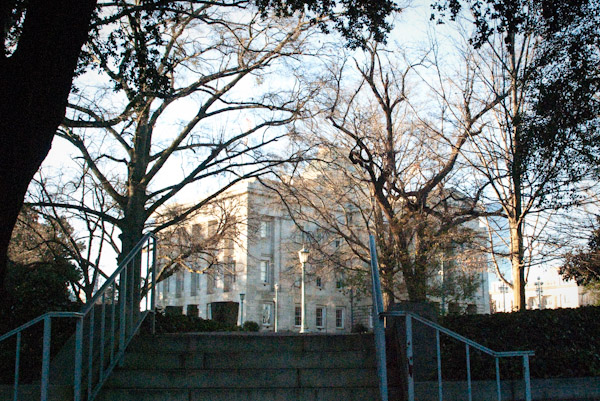 The security man waved us past the metal detector toward the worn marble staircase. “Upstairs on the left. Old House Chamber,” he said.

I thought vaguely about the Charlie Hebdo murders in France, and how no one in Paris was being waved around the metal detectors on this cold Friday. I said hi to my friend Barbara Shepard who was wearing Eiffel Tower earrings and a French scarf.

The room was filled with familiar faces and VIPs. Gale Adcock served 7 years on Cary Town Council, the last three as Mayor Pro Tem.  Mayor Harold Weinbrecht along with Council Members Jennifer Robinson and Lori Bush sat in the row in front of me.

As the minutes ticked toward 3 PM, Gale walked around the room greeting everyone in attendance – Senator Josh Stein, members of the Morrisville Town Council, friends from the nursing profession (Gale is a nurse practitioner and Chief Health Officer of SAS) and family members.

A few more people filed in and Gale explained the proceedings. 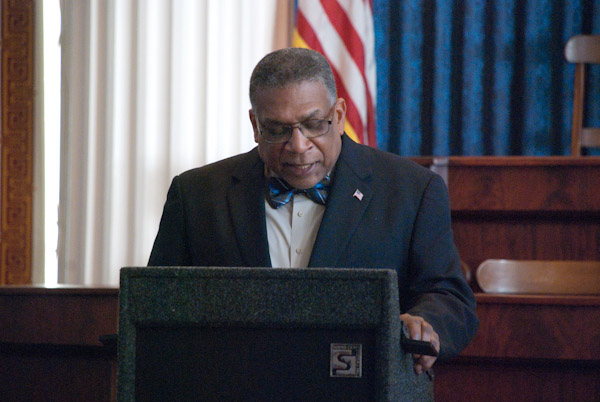 Then it was time for the swearing-in ceremony. Husband Kevin and the family gathered, with Judge Hudson and Gale in the center. I maneuvered around the perimeter, looking for a good angle for a photo through the forest of upraised iPhones.

It was over in a minute, solemn and simple, without the pomp and circumstance of royal coronations or fascist spectacles. I thought of Charlie Hebdo again and the clash of civilizations – voice of the people or commands of the supreme leader?  Sunlight blasted through the windows of the Old House Chamber, illuminating the simple ceremony.

Everyone stood to applaud the newest member of the NC House, now properly to be addressed as Representative Adcock.

Gale made a few short remarks, mentioning the question she has heard most since getting elected. “Do you really think you can make a difference?”

The crowd of elected officials and politically-active citizens all understood the question to be, “Do you really think you can make a difference as a freshman Democrat in an overwhelmingly Republican House?” 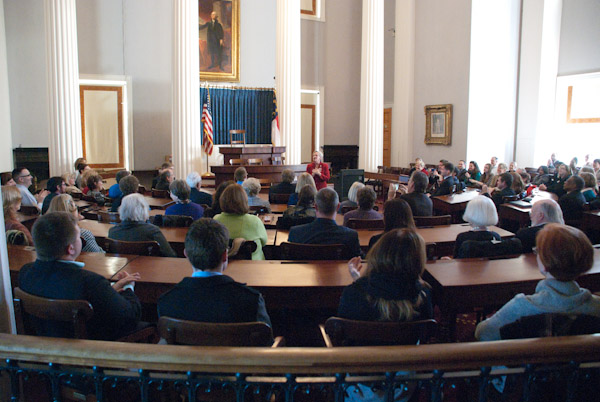 Gale acknowledged her position, relating that she received office number 119 out of 120 available offices for House members.

But she said that she took inspiration from the people who had gathered in the Old House Chamber on Friday afternoon – her friends, colleagues and family. They had all made a difference when the odds were stacked against them, and, in her own Steel Magnolias way, Gale said she was set on making a difference as well.

Gale then invited everyone for cake and champagne in the rotunda. We trooped downstairs, once again skirting the metal detector. A big cake celebrated Gale’s legislative district. 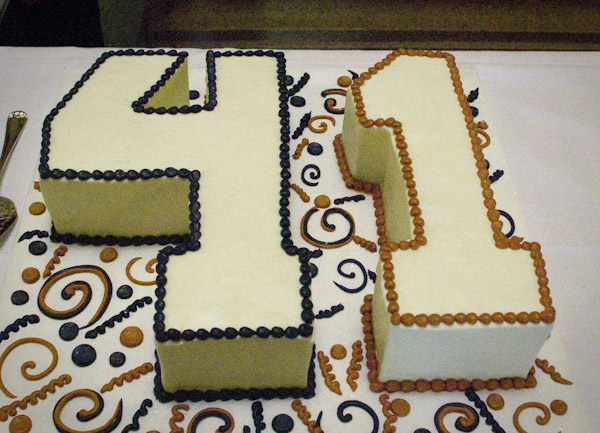 The champagne, however, could not be distributed prior to 5 PM in the Old State House, so we drank sweet tea with just a faint wisp of deliciously Southern irony mixed in. 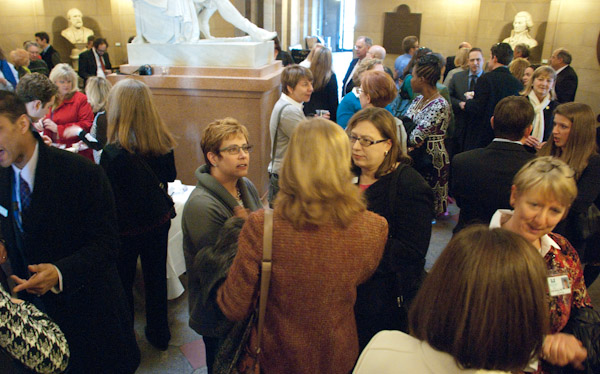 And so the afternoon ended, but the journey began. We’ll miss Gale in Cary, but look forward to her new chapter of public service in the State Capital.