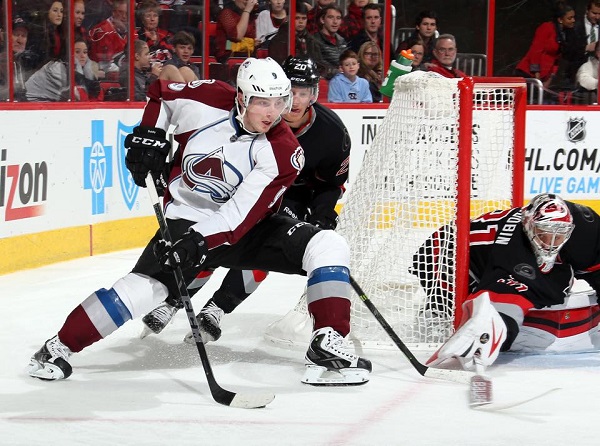 Raleigh, NC — The Carolina Hurricanes had an impressive game over the reeling Colorado Avalanche in a 3-2 shootout win on Tuesday, January 13, 2015 at the PNC Arena. The Avs have several players out with some major injuries but, despite being out of the playoff picture, they are still stacked with some serious talent.

Canes Explode for 20 Shots in the First

The Canes came out firing on all cylinders from every angle in the first period as they amassed 20 shots on net with another 16 either blocked or missed. Getting off 36 shots in a period is rare in the new NHL, and the shots weren’t cupcake shots; rather, many were excellent scoring chances that challenged Av goalie Calvin Pickard.

While not as busy, Anton Khudobin made some key saves to keep the Avs off the scoreboard. Late in the period, with the puck deep in the Canes’ end, Elias Lindholm made a nice touch pass over to Ryan Murphy for a clear. Murph passed to Jordan Staal just as he crossed over the blue line and started building speed towards the Avs’ end.

Murph joined the rush while Staal crossed the Avs’ blue line then cut towards the center for the better angle. Instead of shooting, he passed to Murphy, who went to the right side of the goal and passed back to Staal who completed one of the prettiest team goals, and his first, of the season.

Both teams kept the shooting barrage early in the second with Colorado challenging Khudobin more than they did in the first. Dobby was up to the task and shut down every shot again in the second. About a third of the way through the period, the fourth line of Jay McClement, Brad Malone and Pat Dwyer were on the ice doing what they do very well–providing energy, effectively fore-checking, and never giving up.

McClement brought the puck into the Avs’ end then passed over to Malone along the half boards. Just as Dwyer was entering the zone, Malone slid the puck to Dwyer. Dwyer, realizing he was not being guarded, skated to the center, did a head fake to open more space and, seeing McClement in front of the goal, sent a smooth wrister in from about 30’ out for a 2-0 Cane lead.

Young Guns Perform in the Shootout

The Avs’ coach, Patrick Roy, had a storied and wild NHL career, and his coaching isn’t much different. One can only imagine what was said during the second intermission in the Avs’ locker room. Just 25 seconds into the third, Jarome Ignila won the puck along the half board and just sent it towards the net.

With the puck bouncing, Matt Duchene somehow got his stick on the puck and put one in top shelf while right on Khudobin’s doorstep. Midway through the period, the Avs cleared the puck from deep in their end and carried it the entire length of the ice. Just above the faceoff circle, John Mitchell sent one by Khudobin that was probably the one Dobby wanted back all season.

Two lapses by the Canes resulted in both Avs’ goals.

The Caniac crowd, which was full of teachers for Teacher Appreciation night, rose to the occasion and cheered the Canes on to get another goal. Several teachers were honored, including several from Cary, during TV timeouts.

The game ended in a tie with rookie Victor Rask and Lindholm scoring in the shootout while Dobby stonewalled both shots to garner his third win and second shootout win of the season. The talk among the Caniacs during the intermissions was all about which Cane would be gone in the next few weeks with the trade deadline looming.

Hands down, the #1 name is Alex Semin, but I feel that’s doubtful knowing he has three years left on his contract. If he was to go anywhere, it would be justice to send him, contract and all, to Pittsburg so he can rejoin Jim Rutherford who signed him to the original deal. JR was a very good GM for the Canes and not all contracts are winners, but this was a real stinker.

The Hurricanes will play at the PNC Arena again on Friday, January 16, 2015 against the Vancouver Canucks at 7 pm.

A Look Inside Morrisville Market
Scroll to top