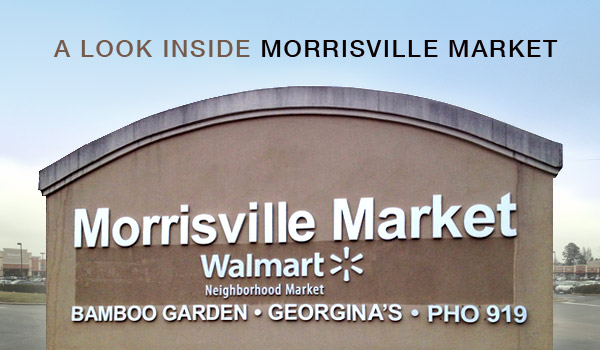 Morrisville, NC — Hidden in plain sight. That’s Morrisville Market at the corner of Davis Drive and Morrisville-Carpenter. You’ve probably driven past it without even realizing it. But hidden treasures within the khaki strip center caught our eye.

A Look Inside Morrisville Market

You’re speeding down Davis Drive going to RTP. Maybe you know the nondescript shopping center with Smithfield’s on one side and McDonald’s on the other.

But inside, you can get great pizza, Indian grocery items, a steaming hot bowl of pho, and a beard trim all in one place.

There’s a Walmart, for starters–but not your average Walmart. CaryCitizen covered the opening of Walmart Neighborhood Market last year. Instead of the household items, tools, craft supplies, etc. that you find in most Walmart locations, this store is devoted to groceries.

The draw here is a larger selection of brand name groceries at Walmart’s usual low prices. The store also features a full service pharmacy and a health and beauty section. Walmart certainly draws shoppers to Morrisville Market, but there is so much more to check out right next door.

This area is quickly becoming filled with Asian grocers–including a small but well-stocked one right in the middle of Morrisville Market. Shivam Indian Spices doesn’t have a website yet, but a peek in the window made me want to check it out.

You’ll find Georgina’s Pizza a couple stores down. This eatery was voted Cary and Morrisville’s favorite Italian Pizzeria and restaurant. Georgina’s features a delicious variety of entrees–including options for those with dietary restrictions.

The Cary/Morrisville area is becoming well-known for its variety of restaurants and food, and Morrisville Market is part of the trend. Start with Inchin’s Bamboo Garden, which features fresh and unique Indian, Chinese and Pan-Asian cuisine.

There’s also a gem called Pho 919 hidden in the far end of the strip. If haven’t tried pho, a beef broth-based soup made with rice noodles, then you’re missing out. Look for our review of Pho 919 tomorrow.

I should mention Morrisville Deli too, because, in addition to their selection of hot and cold sandwiches, they also have great desserts and New York style bagels. 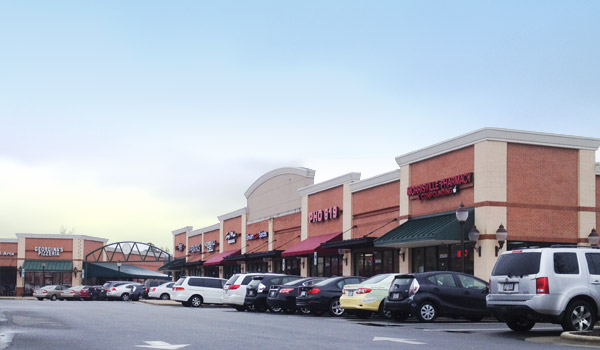 There’s more to do in Morrisville Market besides shop and eat.

A Leap N’ Learn, for example, lies beside Walmart. This educational center offers math and reading programs for elementary and middle school children and a half-day preschool program for toddlers. Whether you are seeking childcare or tutoring, the small location offers a lot of one-on-one attention for youngsters.

As a female, I’ve always found barber shops and salons solely for men to be fascinating. I’ve only been inside one once, when I took my granddad to get a haircut. It turns out that there’s a Guy’s Place Hair Salon in Morrisville Market (opens January 24, 2015 according to a sign on the door) that offers haircuts for males of all ages, facial waxing, gray blending, and beard trims.

Other Businesses In Morrisville Market

Community coverage on CaryCitizen is sponsored in part by Waves of Change, Counseling, Wellness and Hypnosis in Cary.