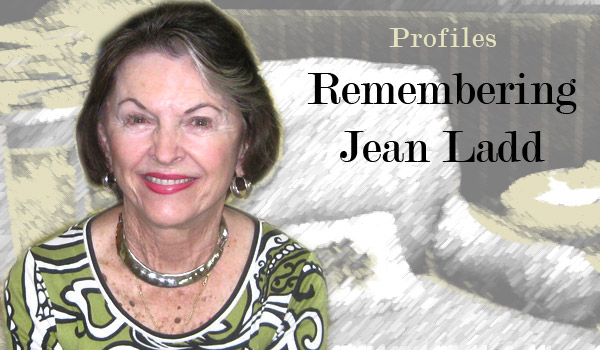 Cary, NC — Mrs. Jean Hobby Ladd, Cary resident since 1938, passed away this month on January 3, 2015. With the help of a transcribed interview conducted by Peggy Van Scoyoc, I’ve compiled a short biography to honor Mrs. Ladd’s life and to recognize her many contributions to the development and prosperity of Cary.

I first heard of Mrs. Ladd while an intern at Cary Visual Art, or CVA. Mrs. Ladd and her husband, Dick Ladd, were contributing founders, active members, and generous supporters of CVA, among other organizations, in Cary.

Jean Ladd has a tremendous connection with Cary’s history–after all, she lived here in the 1930’s and grew up on Dry Avenue right down the road from what is now the Cary Arts Center. Mrs. Ladd lived in Cary her whole life, and I knew that she had an incredible story. I’m happy to be able to share it with the community and to recognize all she did here.

Mary Davis Wallace, Director of CVA and a good friend of mine, pointed me in the direction of an interview with Jean Ladd conducted by Peggy Van Scoyoc in September of 2013. It is from this interview that I was able to compile this story. You can read or listen to the full interview online through the Friends of Page-Walker website.

Like me, Mrs. Jean Ladd was born in Raleigh but grew up in Cary. She went to school at Cary Elementary when it was located where the Cary Arts Center is today. Back then, you started school in first grade and often stayed at the very same school through grade 12. Mrs. Ladd attended that school for 12 years.

In her interview, Mrs. Ladd talked about her school days in Cary:

The school had a very nice cafeteria…a hot lunch was served for 25 cents every day. And the cannery was right there on campus…people could come in the summer and bring their fruits and vegetables and can. [I remember] growing up on Dry Avenue and playing in the street…kick the can and catching lightning bugs…and just your neighbors. You didn’t need to lock your house. 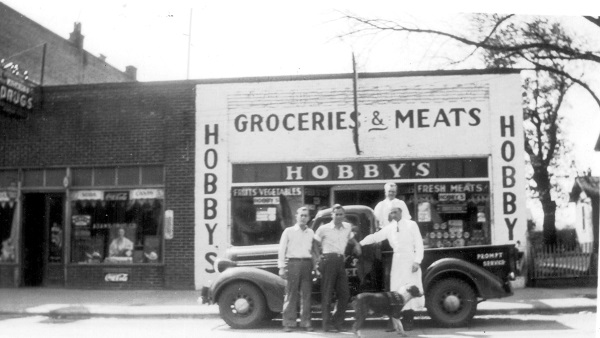 When Mrs. Ladd was a little girl, her father. Glenn Hobby, owned a grocery store on Chatham street, right across the street from their home.

Her grandfather, Mr. Wiley Jones, and her mother, Elizabeth Jones, lived in what is now referred to as “The Jones House,” a beautiful historic home on the corner of Dry Avenue and Academy Street that recently opened as a restaurant. Mrs. Ladd reflected on her childhood visits to that home, right across the street from her own, by saying:

We would go [to that house] and sit in the room where there was the heat and the stove because nothing else was heated. The kitchen and the sitting room, and my grandfather was sitting there listening to the radio all the time. I don’t remember them having outdoor plumbing, but the bathroom was cold.

Then, she talked about her grandparents, who both lived in the house until they were 86.

They’d sit out on that porch, the porch that’s been enclosed in the last few years. They were always sitting out on the porch chewing tobacco and dipping snuff. And I was out there in the yard. I was out in the yard making mud pies, digging up the dirt.

Mrs. Ladd’s father, Mr. Glenn Hobby, had many stores in downtown Cary in the early twentieth century–he started with a grocery store on Chatham Street and then opened a hardware store that eventually started selling appliances. Mrs. Ladd reflects that:

That was kind of a new business, nobody even hardly knew what a TV was or, much less, could afford one. But a few window air conditioners were sold…it was a luxury to have a window unit in your bedroom so you could sleep cool at night.

Mrs. Ladd graduated from Wake Forest University and married her husband, Dick, in 1960. Mr. Ladd was asked to move elsewhere for work, but Mrs. Ladd’s father asked them to stay in the area and work for him. Eventually, upon Mr. Hobby’s retirement, Dick Ladd sold the appliance store and opened a commercial real estate business in the same building.

Susan and Richard, the children of Dick and Jean Ladd, both live in Cary. Richard, like his father, works in commercial real estate right here in town.

The Contributions of Mr. and Mrs. Ladd

Mr. and Mrs. Ladd have played an enormous role in Cary’s growth throughout the years. In her interview, Mrs. Ladd said, “When we first got married, Cary was so fresh and there were so many things it needed and didn’t have.”

The couple joined the Cary Jaycees, and, in the 1960’s, Dick ran for and served on town council. From there, their involvement took off. Dick helped establish the Cary Rotary, the first Rotary Club in the area. Later, in the 90’s, the couple got a small group together to establish Cary Visual Art.

They also helped start the Cary YMCA and Greenwood Forest Baptist Church. Mrs. Ladd summed it up as:

We’ve seen a lot in Cary. We just came along when there were some needs and we’ve been blessed to be able to take part. So it’s just been wonderful. This is what we love, our community. We’re kind of really in the background now, but we are still very much are interested in and care about the Chamber and the downtown and the community as a whole.

Prior to compiling this story, I had some idea of how much Mr. and Mrs. Ladd did for Cary over the years–but it was truly amazing to hear the experience from Jean Ladd herself. Her voice and her story radiate with evidence of her humbleness and her pride for this town. Mr. and Mrs. Ladd’s hard work and determination are truly inspiring.

We always promoted change and growth and so forth, because we thought it’s a good thing. We don’t want Cary to stagnate and not be a part of the new and exciting. Of course, being in business, we needed that. It was all for the growth of commercial things in Cary that we never had had before, the mall and all that. Gosh, I’d have to go to Raleigh for a pair of stockings. There was no place in Cary to get a pair of stockings. So it was good.

Community coverage on CaryCitizen is sponsored in part by Heart of Cary Association.