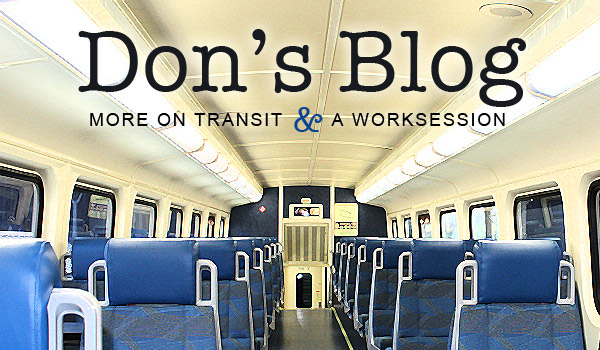 Cary, NC — The Wake County Transit Advisory Committee met again in Raleigh on Tuesday, January 20, 2015. The meeting was similar to our previous one where we worked to design a transit system in a fictitious city, only this time we focused on Wake County.

And, while our previous exercise focused solely on buses, this time we also had the option to include light rail or commuter rail in our network…yay…I knew it was coming. ;-)

Like in the previous exercise, we still had to stay within a fixed budget – so, if you wanted light rail in your plan, that consumed nearly 50% of your transit budget. If you opted for commuter rail, that consumed roughly 10% of your budget (that number could be 20% if we do not receive federal funding – but we worked on the assumption we would). And yes, I know what “assume” means. ;-)

There are significant differences between light rail and commuter rail.

Light rail are electric trains that would require a significant investment in infrastructure. They cannot utilize existing rail tracks or right of way. The entire system would need to be built from scratch, and land acquisition costs would be astronomical. It would, however, run more frequently and make more stops along the way than commuter rail.

Commuter rail uses existing railroad tracks and is considerably less expensive than light rail. Wake County’s portion would run from Garner to the Morrisville/Durham county line every hour except during peak hours where it would run every 30 minutes. It would not have as many stops as light rail. I kinda think of it as a regional Amtrak.

Nine different groups spent three hours working to design their transit systems and then, afterwards, we discussed the similarities and differences and pros and cons of each.

I am pleased to report that not one of the nine groups included light rail in their network.

Seven of nine groups recommended commuter rail in their transit network with two opting solely for bus transit. Can you guess which of the groups I was in? ;-)

A couple of folks in our group actually wanted to include light rail. The majority did not. But, in the spirit of compromise, we started out including it in our network. Once they saw how little resources you had left for bus service, they conceded that it didn’t make financial sense and it was removed. I love it when a plan comes together. ;-)

Our transit network focused solely on bus service – and a lot of it. Most of our routes were high frequency with buses running every 15 minutes. We had good coverage in areas with high population densities and routes to many employment centers, hospitals, universities and the airport. And, yes, Cary was well served.

Consultants will now take our work and feedback to prepare for our next meeting in March. I am optimistic that since not one group recommended light rail, that idea has been derailed. ;-) If we must have rail transit – and I still don’t believe we must – commuter rail makes the most sense of the two.

Up for consideration was the rezoning of approximately 11.5 acres in the Weston PDD from office to residential to allow for 325 apartment units. The proposal passed by a vote of 4-2. Mayor Weinbrecht and I voted “No.”

I typically support rezoning requests when I believe the proposal to be better than what can be built today under current zoning. This proposal – in my opinion – fell short in that regard. I believe the Weston area to be one of Cary’s premier office locations, and I did not believe 325 apartment units to be a good trade for more office development in Weston. I also had concerns regarding density and school capacity.

The Triangle and Math Science Academy, a Cary charter school, is in the process of converting to permanent financing and will be paying off existing loans with a bond issuance.

The Public Finance Authority (PFA) in the state of Wisconsin who would be issue the bonds. The PFA was formed and supported by the National League of Cities and the National Association of Counties. In order for TMSA to comply with financing requirements, a local government entity where the school is located must endorse the bond financing. That is all that is being asked of the town. There is NO financial liability to Cary.

To comply with the Tax and Equity Fiscal Responsibility Act (TEFRA) and PFA requirements, a local government entity must hold a public hearing to allow folks the opportunity to speak in favor of or against the request. During the public hearing, a number of speakers voiced their support of the proposal.

After conducting the public hearing and further council discussion, the request was approved by a vote of 4-2. I supported the request for the following reasons.

Unfortunately for some folks, this request became a referendum on charter schools. That should have never been a part of the discussion, as the school already exists in Cary. The question was simply whether or not to endorse TMSA’s bond financing.

I realize that some charter schools have failed while others have succeeded. One could say the same about public schools, no? I also do not agree that charters “take resources from public schools.” If a public school loses a student to a charter school, sure, they lose funding for that student – but they do not have to educate that student, so what do they still need those funds for?

I agree with some folks who believe that Wake County or even the school board might be a more appropriate government agency to bring this request to. TMSA tried that before coming to Cary for help. Neither board would place the item on their agenda for political reasons. That is sad. I will take practical solutions over ideology any day.

Which might be part of the reason I have a change of voter registration form on my desk filled out and ready to mail in. But I digress…

I want to thank all of you who keep asking me how my back is doing. I really appreciate it. The short answer is “okay.” Some days I feel really good – other days not so much.

A few weeks ago it seemed like I was getting a little better each day, but that seems to have reached a plateau lately. I really can’t tell much of a difference over the last couple of weeks, but it doesn’t seem to be getting worse, so that’s good I guess. As long as I’m good come April I’m happy – that’s when racing season starts back up! ;-)

That’s about all for now – as always, thanks for reading!

From the blog of Don Frantz, Member of the Cary Town Council District B. Photo of Minneapolis, MN commuter rail by railsr4me.