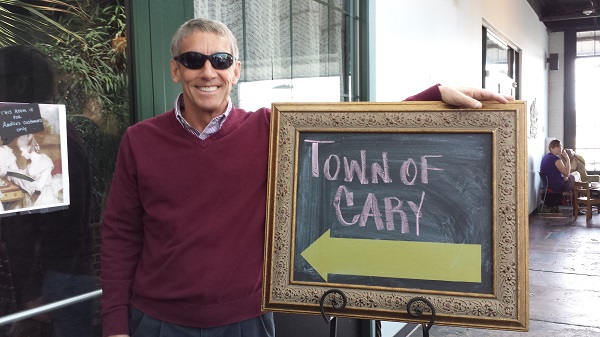 Cary, NC — This was an exhausting week for me.

Monday, I called council members for their concerns and questions about Wednesday’s regular meeting agenda. I was able to contact all council members but Robinson and Smith. The most comments were on the multi-family proposal on Stephens Road just off Piney Plains Road.

Monday afternoon I met with management, administration, legal, public information, engineering, planning, and others to step through the agenda. There wasn’t a lot to talk about and staff had not received much feedback on any of the proposals.

After the agenda meeting I met with the town manager and his staff for our weekly one on one meeting. Our meeting was short and most of the discussion was on naming rights of town facilities. A few years ago the council had directed staff to investigate the use of naming rights and they are now ready to present their findings.

Tuesday, Google Fiber announced that they would be coming to Cary, Raleigh, Durham, Chapel Hill, Morrisville, Garner and Carrboro. In the town’s press release, I stated:

Given that a recent national survey ranked Cary as the second-most wired community in the country, it’s only fitting that Google chose Cary to be a partner in its next deployment of community fiber. With over 97 percent of our citizens having access to the internet, our community has clearly demonstrated that they are heavy users and will certainly make great use of the additional resources that will come with the Google service. We’re thrilled, and it’s just one of the many ways in which our citizens-both residential and corporate-can thrive in Cary.

I look forward to not only having Google in Cary but other fiber providers as well.

Tuesday evening the council held a work session to review two topics. The first was to hear the goals and work plans for each of the town’s boards and commissions. Each board chair or representative provided a report and council voted unanimously to accept all the reports. The town is blessed to have so many citizens that volunteer for boards to make our community better, and we are grateful for their service.

Our second work session was to review the building design standards. These standards, which haven’t been updated since 2005, have worked well for the town resulting in high-quality and visually attractive nonresidential and attached residential developments.

But, a recent focus group made suggestions that might allow more flexibility and take into account additional materials that were not available ten years ago. The town council spent about two hours reviewing suggestions and made several recommendations to staff. Some of those recommendations included:

Staff will take the direction given by council and hold another work session in the future to further specify building design standards.

Wednesday I presented the State of the Town Address to, what is typically, my largest audience of the year. After the address, I answered about a dozen or so questions ranging from business sign issues to road concerns. My talk lasted about 35 to 40 minutes, and the Q&A portion lasted about 15 minutes.

You can read the official State of the Town address text file or watch the video online.

After the State of the Town address, I joined Mayor Pro-Tem Smith and several Cary Chamber board members and briefly met with a group from WakeMed including their President and CEO Donald Gintzig. They talked about their new mission of improving the health and well-being of our community as opposed to their old mission of treating the sick and ill.

We are grateful that WakeMed is in our community, and I believe their new mission fits into exactly what we are trying to accomplish in Cary, which is a healthy and happy community.

Wednesday night was the last regularly scheduled council meeting for January. There were six public hearings and five discussion items.

These and other public hearings will go to the planning and zoning board for their recommendation and council will vote on them at a later date.

Discussion items included multi-family proposal along Stephens Road just off Piney Plains Road to allow 80 multi-family units. This proposal had a valid protest petition which required five yes votes for approval. I am strongly opposed to this rezoning, since there is an overabundance of multi-family in this area.

The council decided to table this, since there were several people in the audience who wanted to speak that didn’t understand that there was not an associated public hearing. It will also give the applicant time to try and address concerns about the proposal. Council will vote on this at the next council meeting. The council meeting ended around 10 pm.

Thursday, the council and management staff left on a train to Charlotte to hold our annual planning retreat. This year’s format was different from previous years and was almost totally interactive and made up of tours and discussions. The purpose was to gather information, thoughts, and ideas about infill and redevelopment.

On our way to Charlotte, the NCDOT Rail made two presentations including an update on all the projects along the Raleigh to Charlotte corridor. It was also pointed out that the Cary train station was ranked #2 in the nation for customer satisfaction.

Once we arrived in Charlotte we boarded a bus and headed to a redevelopment project. This North Hills type development, called the Metropolitan, replaced a rundown mall. There, we heard from the president of the development company that built to project. He gave a project description, history, and lessons learned.

The biggest take away was hearing how both the city and developer had to compromise to make this project happen. In the end neither got what they wanted, but the result was a tremendous improvement over what was there. The relevance to Cary can be scaled to include current and future rundown malls and strip malls.

Friday started with presentations and discussions at the Charlotte Center City Partners. They are a combination of our chamber and planning staff. We also heard from city and county planners. Since the county is mostly made up of Charlotte, it results in close-planning between the city and county.

The presenters talked about how the city is divided up into corridors of density, wedges of single family, and centers within those wedges. Most of the development they are seeing is multi-family south of the city’s center in an area called South End. The biggest take away from these presentations was how all groups are in sync and working toward a common goal. I believe Cary’s planning staff, chamber, and council are also doing this.

After the presentations, we boarded the light rail to tour the South End. This area of the city is experiencing explosive growth with 5500 multi-family units currently under construction. As one might expect, they are experiencing growth concerns from the residents, especially related to traffic. In fact, the CBS affiliate was doing a story on growth related problems and interviewed me about why we were there.

The multi-family units we visited were on the light rail line and are very nice. They were mostly occupied by people in their 20s and early 30s. Interestingly, these units were a block away from very poor neighborhoods, which created quite a contrast.

And, apparently, crime is an issue for these units, requiring elaborate security for entering the buildings and parking areas. The owners and operators of these multi-family units talked about the importance of working with the city on issues. They also said that they believed all the multi-family units on the light rail line would probably have been built anyway but maybe not as concentrated.

One take away point here is that transit oriented development might not create as much new development as one might think but will certainly concentrate it in one area.

They also strongly emphasized the importance of preserving older historic buildings and preserving the character with new buildings. Preserving character is certainly relevant to what are experiencing and planning in our downtown.

Saturday, we visited a redevelopment site about five miles from the city center. This was an edgy area (tattoo parlors, electronic cigarette parlors, live entertainment, etc.) but had a very well organized and involved community group. They worked hand in hand with the city to work on issues to help businesses, adjust public policy, and create infrastructure such as streetscapes and linear parks.

While I thought this edgy area was interesting, I don’t really want to see edgy in Cary. There were several very small takeaways from this area that I would like to see in Cary. A Harris Teeter didn’t have windows on the side but had integrated art instead and, additionally, had a garden roof with a seating area next to it.

It would be worth revisiting our policies to try and create something like that in Cary. There were also several other interesting small things like painted designs in the crosswalks. Cary seems to only have striped outlines or bricked crosswalks. This is another thing to look at.

Our last tour of the morning was through some of the affluent areas of Charlotte that included Dilworth and Myers Park. Interesting developments there included a Lowe’s Home Improvement that was two stories with parking on the roof. This area showed that certain types of developments that might not be what one would think would fit in certain areas will work if done right.

After a late lunch, we had the chance to talk with the Mayor Pro-Tem of Charlotte, the Charlotte city manager, and other representatives from the north of the city. Although the talks were brief, they were interesting. They mentioned having the similar types of problems we are having.

The last tour of the trip was to the Music Factory. This facility is a collection of entertainment venues made to create a walking experience for patrons. They could walk to over a dozen venues that allow everything from live music, to comedy, to beer games. While it is an interesting concept I really can’t imagine where you would see something like that in Cary.

Saturday evening, we headed to the train station, caught the train, and had a debriefing for about half an hour. We arrived home a little past 8 PM. This retreat, like all retreats, was very valuable and intellectually stimulating. But three solid days of this was exhausting for me. Needless to say I had no trouble sleeping Saturday when I returned.

This week the town’s first and only Information Technology Director, Bill Stice, retired. He took the town from basically no IT to one of the top municipal IT departments in the State. We will certainly miss him. His replacement will be hired by the town manager after a national search.

Emails from staff this week included a monthly report from the Homebuilders Association. The report showed a 4% drop in new single family home permits for the last twelve months.

An email was also sent from staff that contained the 4th quarter report from 2014. Some of the most notable information included:

Emails this week included a complaint about sedimentation pollution which was actually on a Morrisville site. I also received emails from an individual complaining about the appraisal value of his property, which is not something the town does.

Other emails included comments for and against rezonings cases, thanks for working to bring Google Fiber to Cary, and a complaint about the “crime wave” in Cary.

Next week will be much slower for me. Activities include meetings, a quasi-judicial hearing, and a presentation.

Well, that is all for this week. My next post will be on Sunday, February 8th. Although I have Facebook and Twitter accounts those are not the best means of communications with me. Please send all Town of Cary questions or comments to Harold.Weinbrecht@townofcary.org and email personal comments to augustanat@mindspring.com.

From the blog of Cary Mayor Harold Weinbrecht. Photo from the Charlotte retreat courtesy of Mayor Weinbrecht.