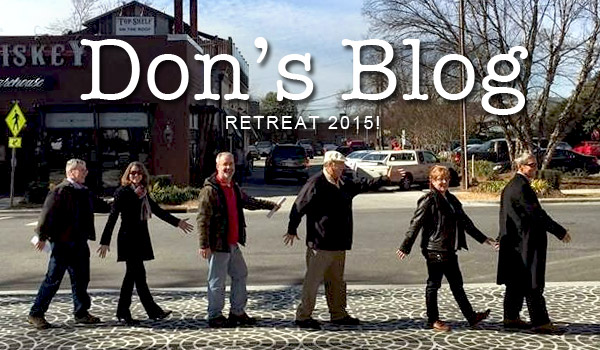 Cary, NC — The 2015 Cary Town Council and Staff Retreat was held in Charlotte this past weekend and, I have to say, this was probably one of the best – if not the best – retreats I have ever participated in.

The focus of this year’s retreat was redevelopment and in-fill development – a topic we find ourselves struggling with more and more each year, especially in regards to our downtown.

But unlike past retreats – where the majority of our information and discussion sessions took place in a hotel conference room – this year, we spent most of our time touring the city and seeing things for ourselves.

The council chose to visit Charlotte for our retreat because they have experienced significant redevelopment in and around their downtown. We wanted to see first-hand and hear from stakeholders involved in and impacted by Charlotte’s redevelopment efforts.

Yes, we know Charlotte is a very different city than Cary – and I think we all like it that way. We don’t want to be Charlotte, and we aren’t trying to be Charlotte. But we can learn from their successes and failures in regards to development and redevelopment and, maybe, apply some of that knowledge here in Cary.

All retreat participants traveled to Charlotte by train – and I have to say that, if you are going to Charlotte, Amtrak is the way to go. The trip took approximately three hours – about the same as if you were to travel by car. The train was clean, comfortable, and on time. 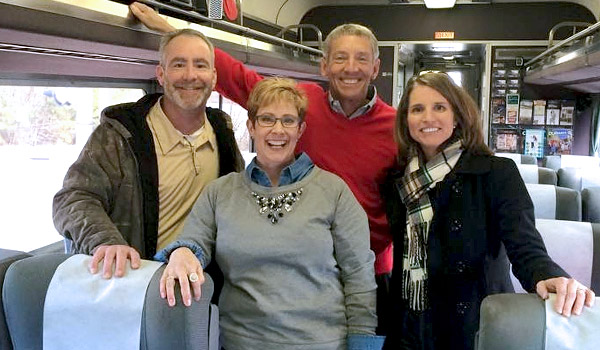 The Cary Train Depot is a beautiful facility. Unfortunately, that is not the case in Charlotte. I was surprised that, with all their efforts regarding transit, especially light rail, that they would have invested in the Charlotte Amtrak station and somehow tied that into their transit network.

Getting to the train station is a breeze – getting from there to where you actually want to go? Not so much.

A bus picked us up at the station and took us to the Metropolitan – a fairly new mixed-use development just outside of the city center. We toured the development and spoke with the developer. The project was a public-private partnership between the developer, the city, and the county.

The city and county assisted with infrastructure and zoning/permitting. One interesting thing about this project was a big box store on top of another big box store – a Target store is on top of what used to be a Home Depot (a BJ’s will be moving into the Home Depot Space soon).

Dinner at The King’s Kitchen

Afterwards, the council went to dinner at The King’s Kitchen – a non-profit restaurant that donates all of their profits to feed the poor in the Charlotte area. They also work to train and employ the poor and disabled. The food and service was outstanding, and I highly recommend the sweet potato fritters. Seriously – get the fritters. Yum.

Friday morning, we met with the Charlotte City Center Partners and city planners to discuss and learn more about their approach to land planning, partnerships and funding.

While partially funded via a special tax district, the Charlotte City Center Partners is a private organization that facilitates and promotes the economic, cultural, and residential development in Charlotte’s urban core. They work very closely with the city and community to leverage public and private investment that supports walkable and pedestrian friendly development and ensures a diverse mix of business and residential opportunities.

One funding mechanism that Charlotte uses for qualifying projects is Tax Increment Financing (TIF). Charlotte’s TIF program focuses on infrastructure improvements such as water/sewer, roads, parking, and greenways. The developer is required to construct and pay for the needed improvements and is then reimbursed a percentage of the cost of the improvements after the project is completed and property taxes are paid at the post-development assessment.

TIF financing is and has been a controversial funding mechanism with some risk. Charlotte’s program, however, does not cover any up-front costs and, should the developer go bankrupt or the project fail, the city still gets the infrastructure the private entity constructed. Charlotte’s financial participation allows reservation of right to influence the type and form of a specific project, and the project(s) must provide for a public benefit.

We also learned about Charlotte’s land use plan – Centers, Corridors and Wedges Framework. Basically, there are no limits in the city center (downtown Charlotte), high density along the road, and transit corridors and lower density single family wedged in between. 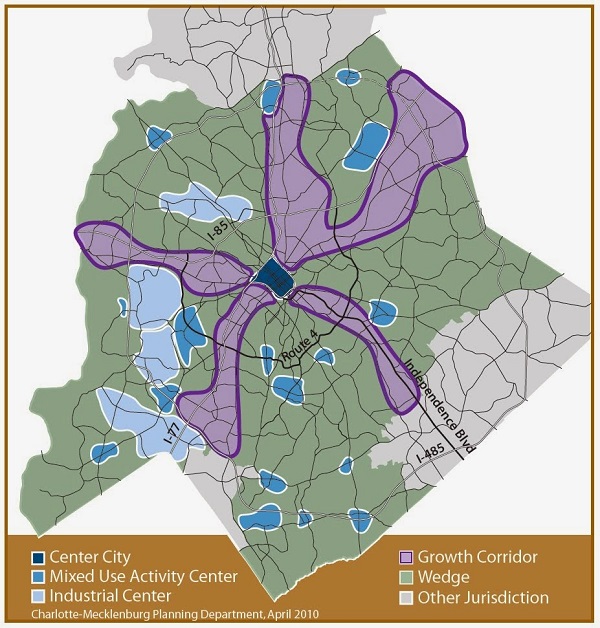 We spent quite a bit of time in South End – an area outside the city center that has experienced a tremendous amount of growth over the last seven years since the construction of the light rail – mostly apartments (thousands of units) along with some commercial and office.

Some of the apartment complexes were impressive while some were, well, not so much. You could easily tell which developers took pride in their projects and wanted to bring something of value to the community and which ones didn’t. Charlotte doesn’t have design guidelines like we have here in Cary, so they are limited in what they can require in regards to building materials and architecture.

They did state that this was something they were looking at but, like us, they are worried about State House Bill 150 that would limit what local governments can mandate in regards to development standards. They don’t want to rock the boat too much.

What was most impressive in South End, to me, was the re-use of old warehouse and factory buildings into restaurant, retail, and residential uses. Any developer can build a new apartment complex – but I don’t care how much money you spend, you cannot recreate the look and feel of old buildings. I wish we had that here in Cary.

We heard from the Developer of the Ice House, a bar and grill that used to be a mill (if I remember correctly). It is next to the old Charlotte trolley car station that is now a farmer’s market.

We also visited Seaboard Street and the NC Music Factory. If you want to see an impressive example of the redevelopment of historic property, you really need to go here. Much of the property used to be a cotton mill and then an asbestos textiles factory. It cost over $5 million to remove all of the asbestos from the buildings before its redevelopment.

It is now an entertainment venue with outdoor and indoor concerts, comedy club, bars and food services. The place was awesome. 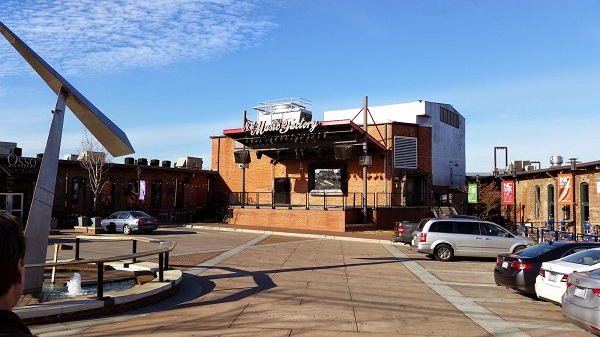 The redevelopment of many of these properties could not have been possible without historic preservation tax credits – which our state legislature eliminated but is now reconsidering. While I can appreciate the concerns of abuse and cost with the program, those concerns can be resolved. It is imperative for historic preservation and re-use that we put this program back in place.

If you agree, please contact your state legislators and tell them to restore the historic preservation tax credit program.

We either took the light rail or a bus everywhere we went. From there we walked…a lot. The light rail was impressive, and I can see how such a transit system works in an urban city with the population and density of Charlotte. Wake County is probably 20-30 years behind.

Charlotte will be constructing a new nine mile second leg of the Blue Line soon at a projected cost of $1 Billion. That’s billion with a B. I got five bucks that, by the time its all said and done, it ends up being closer to $1.5 – $2 billion. It will run from the city to UNC Charlotte. 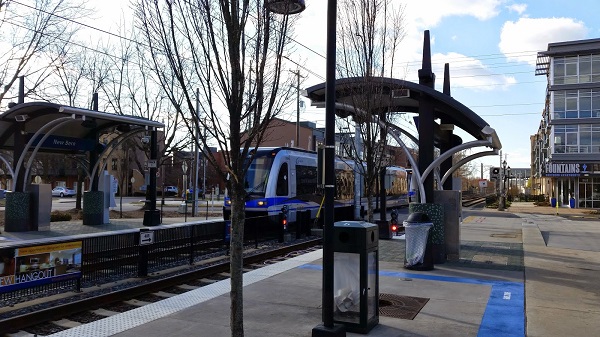 The construction of the light rail has triggered a tremendous amount of new development – mostly high density housing apartments.

We rode the light rail over a dozen times. Not once did anyone check or ask to see our tickets. You could just get on, go where you needed to go, and get off. This was shocking to me. It also made me wonder how they can accurately keep track of ridership data and, not to mention, aren’t ticket/pass sales supposed to help pay for it?

There were not turnstiles to go through or anything to stop someone without a ticket from getting on. Sometimes there was hardly anyone on the train – and sometimes it was standing room only.

On the train ride back to Cary we spent much of the time debriefing and discussing what we learned – another advantage of taking the train. But man, was it good to get back home. Like I said at the beginning, this was one of the best retreats ever – less presentation and more seeing it for ourselves. I believe we learned a lot that we can apply here in Cary.

Special thanks to Lana Hygh, Ted Boyd and others for all their efforts to put this together. It was no easy task, I am sure. I hope future retreats follow a similar format. I also want to give a shout out to Lori Bush. She was sick the entire time but toughed it out and somehow managed to participate. She’s a trooper.

That’s about it, I think. We saw and did so much that I’m sure I probably forgot something. Maybe Harold or Lori’s blog will offer even more insight to our retreat. No pressure guys! ;-)

Take care and as always, thanks for reading!

From the blog of Don Frantz, Member of the Cary Town Council District B. Lead photo courtesy of Jennifer Robinson.