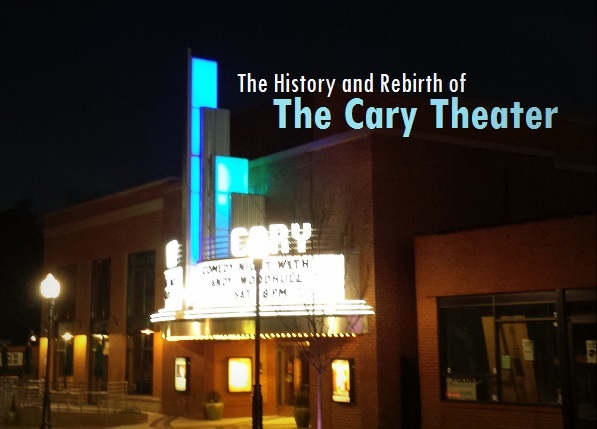 Cary, NC — If you’ve lived in Cary for more than a few years now, then you may know that The Cary Theater used to be an auto parts store. But did you know that, from 1946-1955, the site was home to the area’s first indoor movie theater? Here’s a bit of The Cary’s history–and the story of how it came full circle.

The Story of The Cary Theater

Last month, the Page-Walker Arts and History Center hosted a special presentation called “The Cary: Full Circle.” Guest speakers included both town staff who had worked closely with the theater’s renovations and reopening and the family of Paul Thomas Chandler–the man who opened the original theater in 1946.

At the event, Chandler’s daughter, Fay, shared her childhood memories of the old theater and her reflections about its recent reopening. Her talk revealed not only the theater’s history but also enlightenment about the film business and culture of the glamorous forties and fifties.

Paul Thomas Chandler built the area’s first indoor movie theater (also called The Cary) in 1946. In addition to Fay and her brother, Randy, Chandler had two other children–all born two years apart–and he needed something to keep them entertained and out of trouble.

That’s when he decided to open the theater. Four different movies were shown each week–films on Monday-Friday and, on Saturdays, a variety of westerns, newsreels, and serials.

Fay called the serials “the forerunner of today’s soap operas” because you had to wait until the following week to see what happened in the next episode. 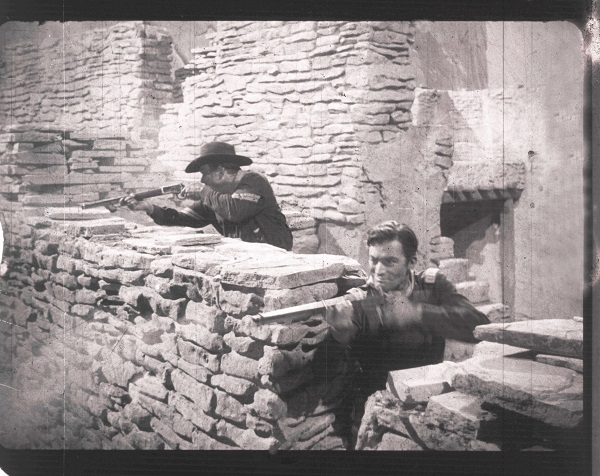 A film segment was found on the floor of The Cary during its renovation. Experts were able to pull from it this image of a 1950’s Western.

At that time, the reels were huge metal containers–about the size of a car tire. The movie reels were dropped off (and picked up, after their debuts) at the theater overnight in trucks, and Fay recalls hearing the clammer of them being loaded and unloaded.

Paul Chandler obtained his movies from a Charlotte group. His son Randy, who also spoke at this event, remembers riding to Charlotte with his dad to pick out the movies that would be shown. Fay said that, when her father opened the theater:

That was the era when movies were becoming glamorous and beautiful. 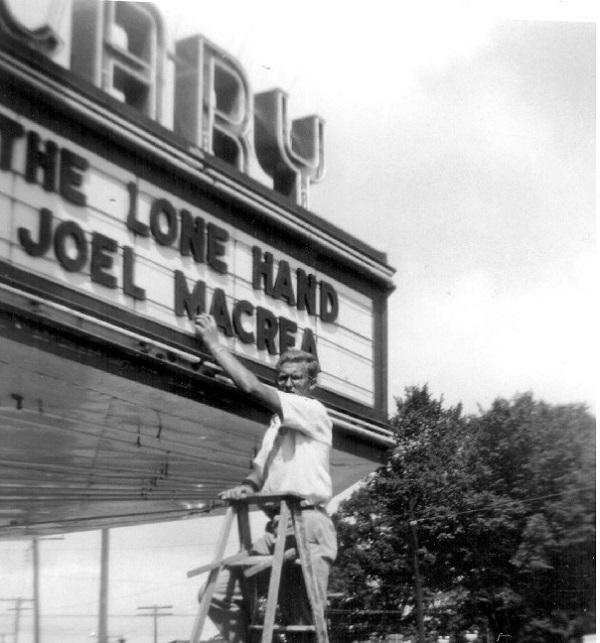 Paul Chandler’s son places letters on the marquee of the 1950’s Cary Theater.

Much like it does today, the old theater also saw on-stage performances by singers like Patsy Cline. In those days, theaters within a five mile radius of one another did not show the same films. Fay remembers clocking The Cary’s distance from their competition at the time–the Varsity theater in Raleigh.

The audience had another good laugh when Fay told a quick story about one of the theater’s customers in the fifties. In that time, many Cary residents grew gardens right in their yards.

We had one friend that canned, froze butter beans, peas, whatever was in her garden. She came [to the theater] every time the movie changed. She sat on the very front row and, during the movie, she would shell whatever she had. We had to clean up the day after the movie and, when we did, we could always tell what was in Miss Irene’s garden.

When the Chandlers first owned the theater, moviegoers could purchase 25 cent tickets, 10 cent boxes of popcorn, five cent Cokes and candy bars, and, according to Fay, “if you sat on the last few rows, a kiss or two. It was one of the popular places for dates.” 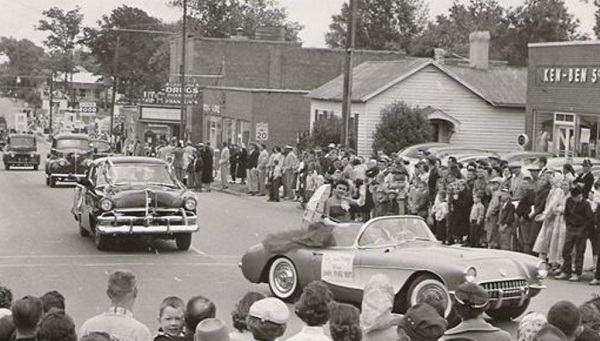 Taken on the day of the 1953 Fireman’s Day Parade, this photo shows the original theater in its background.

The theater was also a great place to stay cool in the summer months. Like the farms and other businesses, The Cary didn’t have air conditioning, but Fay’s father used a huge ceiling fan to draw heat out of the brick and cinderblock building. These naturally-cooler building materials, along with the fan, helped increase attendance and caused the business to flourish.

Unfortunately, even the cool building couldn’t compete with the televisions that started popping up in homes in the late fifties and early sixties, and the rise of home entertainment caused the Cary Theater to close in 1955.

That didn’t stop the Chandlers, though, as the next business that occupied the site was the “Cary Clothiers,” which was also known as “Randy’s.” After the theater closed, Paul and Randy Chandler drove to New York and picked out clothing brands that they wanted to sell. They brought nice men’s suits back to Cary in the back of their car and, eventually, started a highly successful men’s clothing business.

The father/son duo operated the store together for ten years and, then, Randy owned it for another decade until it went out of business in 1981. Prior to the 1979 opening of the mall, which we now know as Cary Towne Center, it was a very popular business, as men who lived in Cary used to have to go to Raleigh to buy nice clothing.

After Cary Clothier’s closed, and after the site’s long standing as an auto parts store, the town purchased the space with plans to reopen it as a theater to both pay tribute to its history and to revitalize downtown.

Fay told the audience that “it was the highlight of her winter” when Randy came to tell her that they were going to reopen the theater. 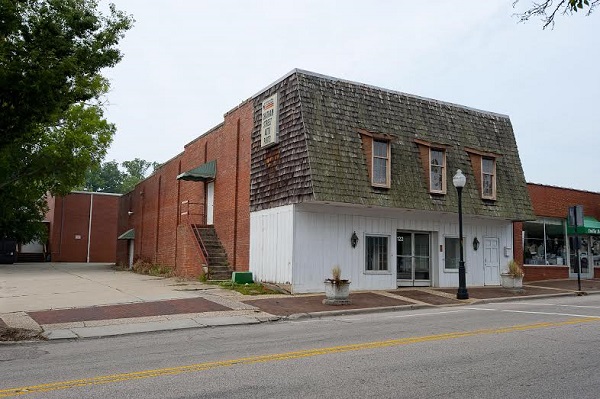 This photo shows the old auto parts store that stood where The Cary does today.

Lyman Collins, Town of Cary Cultural Arts Manager, spoke further about the process it took to reopen the theater. He showed photos of how the building looked in 2010 as a worn-down auto parts store–he remembers passing it and not even knowing that it was once a theater. After wandering in one day and seeing that, indeed, it was once a place of film and live shows, he decided to honor the space by reopening it as both a movie theater and performance venue.

There was lots of work to be done–bathrooms weren’t to code, there were no dressing rooms for performers, and the lobby was far to small to house a modern audience.

Construction began, but not without the help of artists and preservationists of whom were completely dedicated to keeping the building’s history intact. The design of the new marquee, the spiral stairwell, and even the preservation of several walls were all important parts to this project–and to the artists, architects, and town staff who were involved.

Be a Part of The Cary’s Success

The renovation and reopening of The Cary theater was special to many people–especially the Chandlers–and it was so neat to hear their personal accounts of the project in person. If you haven’t been inside The Cary since its February 2014 opening, a visit is well worth it.

The theater features a variety of entertainment options for audiences of all ages, including live shows and $5 movies. You can still buy popcorn and refreshments at the theater–which are reasonably priced but are, unfortunately, no longer less than a dollar. 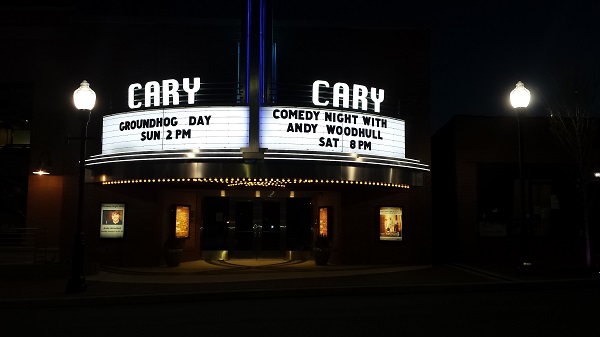 The lettering–and shape–of the new marquee is very much inspired from Chandler’s original design.

You can find more photos, information, and fun facts about the building’s history on the second floor, as well as some special tributes to the original building–like an old brick wall that was preserved during renovations. It is now a spot for guests to sign their name and leave their mark.