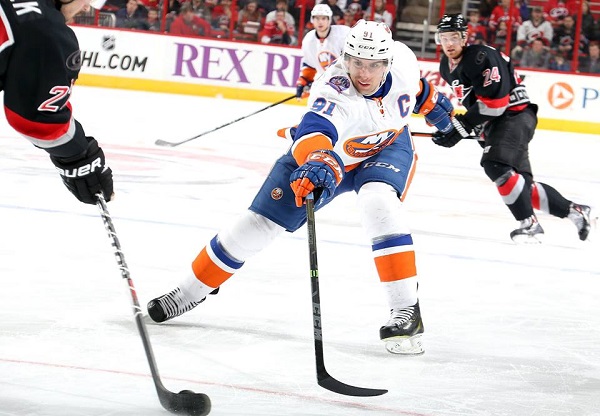 Raleigh, NC — After coming off an impressive 6-3 victory against the Ottawa Senators on Monday, the Carolina Hurricanes lost to the New York Islanders 4-1 at the PNC Arena the next night on Tuesday, February 17, 2015.

The Canes had a tough time from the get-go or, as coach Bill Peters would say, “They didn’t start on time and had too many passengers.” The Islanders had all of the strong play throughout the first period. They checked better, skated harder, created more traffic in from of Anton Khudobin, and dominated with 14 shots on net compared to only seven for the Canes.

John-Michael Liles, who was a recent healthy scratch, got called for holding late in the first. Despite the Canes being one of the top two teams on the penalty kill, the Islanders wasted no time in cashing in on the man advantage for the 1-0 lead. Eric Staal had a good period and was trying desperately to get the rest of the Canes to follow his lead, but few were following.

In the second period, the Canes got more shots off, but few were barn burners or serious threats. Many were from far out with little to no traffic in front of the goal, giving Chad Johnson an easy go at racking up the save statistic. After Dobby stopped a barrage of shots, the puck was sent behind the net, but the Canes weren’t able to gain possession to clear the puck.

Brock Nelson was out front near the face-off circle with five Canes in front of him, blocking Dobby’s sight. Nelson took advantage of the error and sent one in for what seemed like, and turned out to be, an insurmountable 2-0 Islanders lead.

Early in the third, after the Islanders won a face off deep in their own end, Thomas Hickey banked a clear off the side boards to Michael Grabner in the neutral zone.

Grabner used his impressive speed and went past the Cane defense all alone on Dobby and made the shot for a solid 3-0 Isle lead. The saving grace to erase the shutout was midway in the period with Jiri Tlusty starting and ending the play with the lone Cane goal. Tlusty kept the puck alive in the Isles’ end and passed over to Tim Gleason along the near side of the blue line.

Gleason shuffled a pass to Jordan Staal along the mid boards who passed to big brother Eric behind the net. Eric settled the puck with the Islanders, giving him too much time and space, read into that respect, with Eric feeding a beauty to Tlusty charging the net who put it home to wipe out an embarrassing home shut out.

Peters pulled Dobby with about five minutes remaining and All-Star John Tavares made short order of sending a rink long empty netter to close out the score.

The next home game is today, Friday, February 20, 2015 against the Toronto Maple Leafs. Both the Canes and the Leafs are subjects of numerous trade rumors, so it’ll be a great night to come out and watch how each team, and the probable many scouts, approach the game.