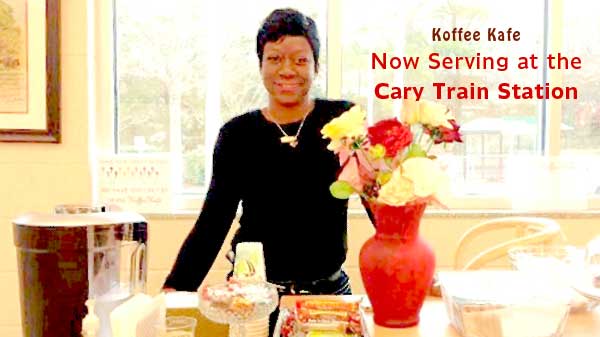 Cary, NC — The Koffee Kafe–a friendly, grab-and-go coffee service–just opened in the Cary Amtrak station downtown, and it’s serving the community in more ways than one. I met with the owner, CoCo McMillan, to get more details.

Koffee Kafe & the Train – Made for Each Other

Academy Street in Downtown Cary is bustling with businesses and restaurants–many of which serve morning coffee to customers. However, on the other side of the train tracks, grabbing a “quick cup of joe” in the morning isn’t all that quick.

Until last month, early morning Cary train passengers had few-to-zero nearby options when it came to obtaining their daily cup of coffee or a quick breakfast. But, as of January 22, 2015, Koffee Kafe opened for business right in the waiting area of the Cary train station.

Now, train passengers and downtown commuters alike can grab a great cup of coffee from CoCo as early as 6 am. CoCo told me that:

[Customers] have been really appreciative. They’re like, ‘I don’t have to walk across the street for coffee anymore!’ Especially the last couple of days since it has been so cold.

CoCo also serves fare from Downtown Cary’s Blue Moon Bakery. I got to try pumpkin apple spice and orange blueberry breads, both of which were made that morning. CoCo laughed and told me that she feels like she gets “special treatment” from Blue Moon since, every weekday morning, a baker makes the breads for her before the bakery even opens. 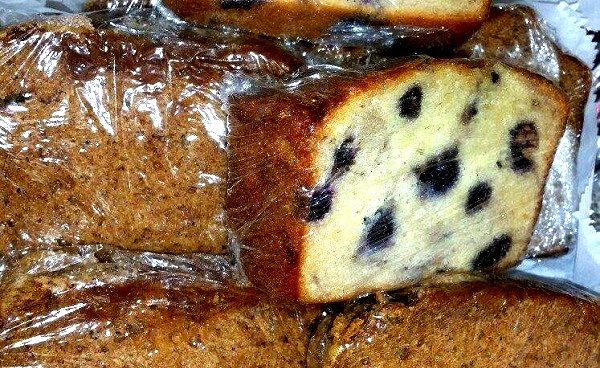 That’s just one example of how Koffee Kafe serves not only customers but other downtown business owners as well. CoCo constantly points out-of-town travelers and locals alike in the direction of shops and restaurants in Downtown Cary.

A lot of people want a hot breakfast and, since I don’t have that here yet, I refer them to another close-by spot. I sent someone over to Ashworth’s just this morning.

CoCo also told me that, if all goes well, she will eventually start serving breakfast pizza made fresh by Roma’s Italian right down the road. At noon, she brings any leftover items to the Cary Chamber of Commerce, the fire department, or the police station “just to give back.”

It’s not just downtown restaurants that Koffee Kafe promotes–there’s a sketch of Downtown Cary’s historic Matthews House framed and hung right above CoCo’s station. When customers point out how beautiful and unique the art is, CoCo tells them about the house and encourages them to stop by and check it out.

In speaking with CoCo, it was evident that her success is due to two things–her commitment to maintain strong ties with the town…and with her customers.

CoCo shared with me the best part of her new job:

I’ve met so many people that travel, and everybody tells their story, which I love. Some [stories] are amazing, some of them are sad, but I love to talk with the customers. Sometimes people come in, and they seem down. I’m in a great location to make someone’s day or put them at ease with a cup of coffee and a kind word.

It’s obvious that this small business owner has bonded with her customers–and after meeting CoCo, you’ll see that her positive outlook and kind personality are contagious. While we were talking, a passenger interrupted us. He asked CoCo if the train waiting outside was his train, to which she playfully replied, “No, that’s the 10:00 train. You’re on the 11:57!”

CoCo has big plans–she wants to expand her menu offerings and, if all goes well, she may open other Koffee Kafe locations in the Raleigh and Durham train depots. Gregg Shanno, Manager of the Cary Amtrak, said that:

I’m happy the Koffee Kafe is located inside the station, as coffee is often requested by travelers. 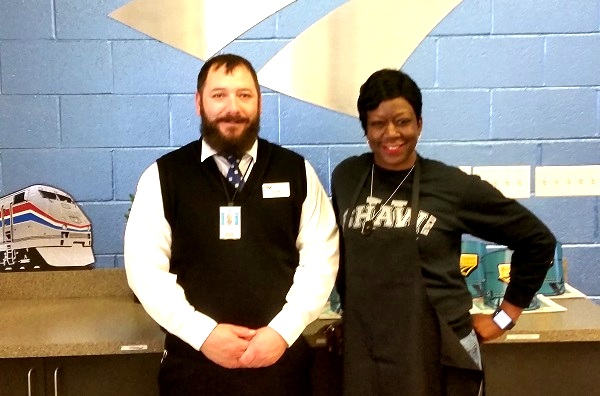 CoCo has formed many relationships with both customers and train station officials since her January 22 opening. She emphasized that:

The staff is really great here. This depot was just named number one for customer service, and I can see why. Standing here all morning, I get to watch and observe what goes on, and they’re just amazing. I just try to add to the station; to help make it fabulous.

Downtown coverage on CaryCitizen is sponsored in part by Studio 180 Salon on West Chatham Street in Cary.