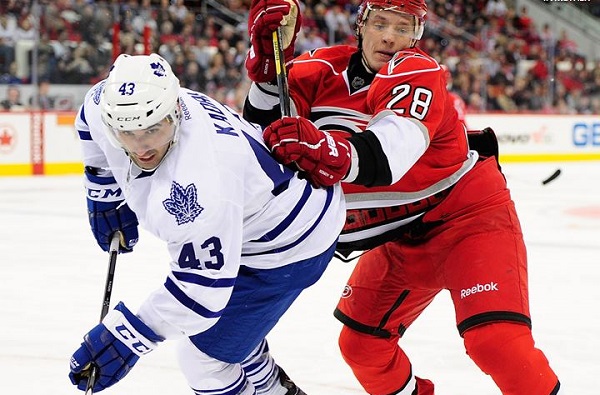 Raleigh, NC — The Carolina Hurricanes swept the season series against the Toronto Maple Leafs with a 2-1 victory Friday, February 20, 2015 at the PNC Arena. Eric Staal and Jordan Staal had the goals; this was the eighth time that the brothers scored in the same game for the Canes.

The Leafs came out very strong, not looking like a team that had dropped like a rock, as they were the more aggressive competitors early on in the game. Once the Canes got their game face on and realized the holes in Toronto’s game plan looked like Swiss cheese, the momentum shifted. Cam Ward, playing in his 499th career game, had to make some critical saves early on.

One key save was at around the five minute mark when Nazem Kadri got the puck in the face-off circle then skated through three defenders through the crease then took a back-hander that Ward made–an impressive sliding pad save.

After that, it was all Canes. Jiri Tlusty had the puck down low in the Leafs’ end, passing to Faulk just inside the blue line. Faulk caught the puck, turned to the goal, and took a stride then sent what is becoming his signature shot, a “wicked wrister.”

Eric Staal was in the mid-high slot and managed to ever so slightly get the shaft of his stick then redirected the puck past James Reimer for a 1-0 Canes lead. Just over four minutes later, the Leafs had a furry of shots that Ward kept turning back.

One save had Ward sliding to the far side of the goal with the puck going across in front of the open net. Brad Malone jumped on the goal line between the pipes and made an excellent save but learned how hard the goalie position is when the rebound went back to Brandon Kozun who slid the puck five-hole for his first NHL goal.

The Canes won the face-off after the goal and had the puck deep in their end. Tim Gleason touched the puck up to Tlusty then sent the puck up to the blue line. EStaal skated to the puck and went through the center zone going down the right wing into the Leafs’ end.

Eric stopped along the half boards and turned and waited for both Tlusty and Jordan Staal to go to the net. Jordan went right down the center, had his stick in a perfect position, and made eye contact with his big brother who then sent a beautiful pass right on the tape for a classic tip-in and a 2-1 Canes lead. 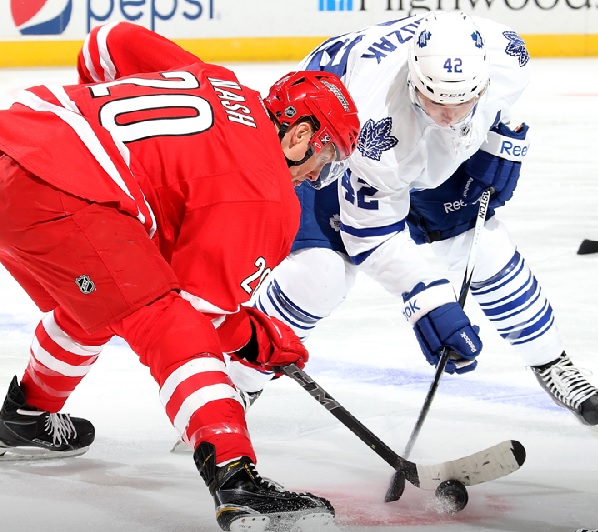 Olli Jokinen recently joined the Leafs in a trade and recently made a comment the Leafs’ locker room is full of negative energy. Reading into that, the team is broken and, being in the self-proclaimed hockey capital, every player is under the microscope. Phil Kessel is one of the best snipers in the NHL, and he looked like he was just going through the motions with little effort and officially had only one shot.

Credit also has to go to the Canes’ defense and forechecking.

The Leafs tried to form some semblance of a team in the third. While there was no scoring, the period was full of decent hockey with rushes up and down the ice by both teams. Shots were scarce, as both teams only had six apiece on net, but the attempts were there.

The Leafs were attacking hard midway in the period, when mild-mannered Ward decided that he had enough Leafs on his doorstep. When the Canes cleared the zone, Ward’s leg somehow obstructed Daniel Winnik, and Ward got called for tripping.

The Canes penalty kill squads were again successful, going four-for-four, with the Leafs getting just one shot with the man advantage. Pat Dwyer was a healthy scratch, which could mean he’s just unlucky, because the Canes have a healthy team or could have been held out because of a pending trade.

He’s a great team player, so I hope it’s only because of numbers. Alex Semin played for the first time, after being a healthy scratch for the past two games, and still isn’t playing like a $7 million player. He had some good plays and nice passes but only one shot on net. He has to step up his game big time or go to the KHL.

The next home game is Tuesday, February 24, 2015 against the Flyers (who always bring out the best in the home crowd). Come on out and enjoy the game.