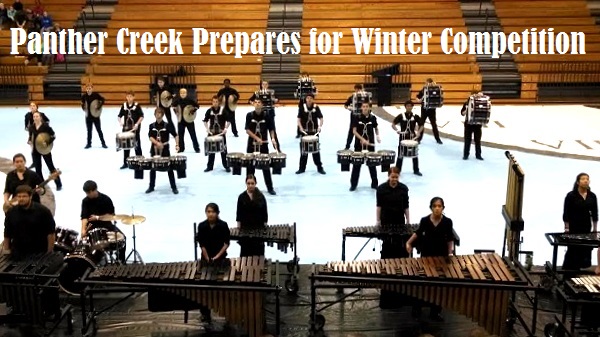 Cary, NC — Time is of the essence as Panther Creek High School rushes to recover from being “snowed in” last week and prepares for this weekend’s indoor band competition on Saturday, February 28, 2015. Erin Simanskis, Panther Creek’s Communications Coordinator (and proud drumline mom), shares with us a “behind the scenes” look at this large-scale competition, which will host 45 student percussion and winter guard groups.

Two giant clocks are painted on the corners of a plastic floor covering for Panther Creek High School’s upcoming winter percussion show. The clock faces fit the theme of “Time,” this season’s percussion show, but none of the students who painted the floor several weeks ago knew how critical the minutes would be this year.

The school is preparing to host 45 high school and middle school percussion and winter guard groups in its second annual Panther Creek Indoor Competition (PCIC) in Cary on Saturday, February 28, 2015. And, like the hosts, all 45 of these groups lost several days of valuable practice time when schools were closed last week because of snow and ice. 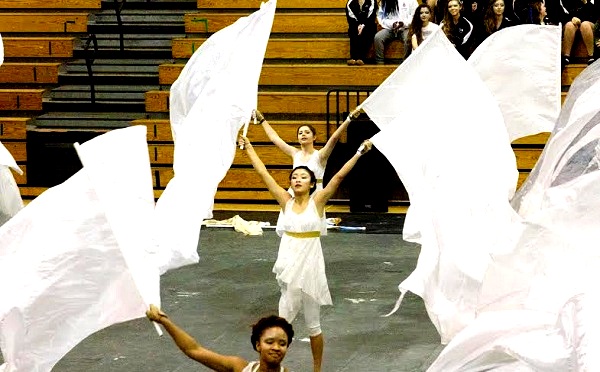 Now, all the students are racing the clock to learn music and drill to deliver a polished show at PCIC. Indoor percussion and winter guard shows are performed in school gymnasiums, but weekend competitions are still affected when school boards cancel extracurricular activities as bad weather makes traveling to a competition difficult.

Many Triangle groups come by car, but some from distant North Carolina counties and from three Virginia schools will be busing their performers to Panther Creek High School.

Competition organizers are hoping to get the same size crowds as last year, when 2,000 performers and spectators attended the event. Most fans are families and friends of the performers. They fill Panther Creek’s gymnasium bleachers to watch the performances and then the award ceremonies.

Percussion trophies are given out halfway through the day while the Winter Guard groups, which are more numerous, will get their results at 10 pm Saturday night.

Fans can expect to see a competition that showcases the musicianship and dynamic intensity of the percussionists playing stationary instruments like marimbas and synthesizers while drummers and cymbal players march complicated drills on the floor at the same time. The themes for each school vary and the music can range from classic to rock to contemporary.

Winter guard is the indoor version of color guard with the visual excellence and rhythmic master of both female and male dancers performing to pre-recorded music. This clip show’s Panther Creek’s bronze-winning winter guard performance.

The group made a strong start taking first place and high score of the day at their first competition (at Wakefield High School) two weeks ago. The school’s Winter Guard teams are under the same time crunch, spending extra rehearsal time, eager to continue the season’s pace. So far, this season, Panther Creek’s Junior Varsity guard’s show “Angels” scored first and Varsity’s “Siren Song” captured second in their first competition.

This is the first year that Panther Creek has added a JV group, and several students who ordinarily play other instruments during marching band season are now dancing and spinning flags and rifles. 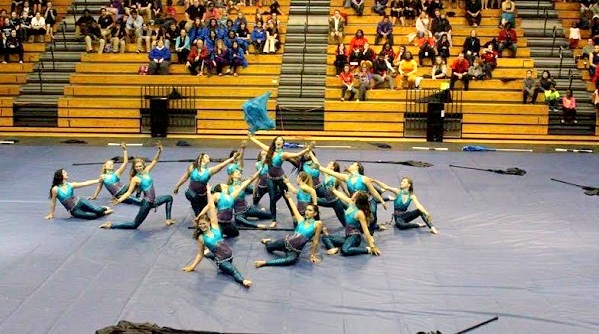 A Team of Volunteers

A band booster committee has been planning PCIC for several months.

Dozens of local businesses have sponsored ads in the event program while several restaurants like Cary’s Chick Fil A and Uncle Maddio’s Pizza Joint are donating food for the judges and instructors’ hospitality rooms.

Hundreds of parent volunteers, most of whom don’t have children enrolled in the percussion or winter guard program, will pitch in to welcome visiting schools, direct parking, and sell concessions on Saturday.

Our band parents are incredibly generous with their time even when their students are not directly involved. They know it is the year’s second biggest fundraiser and that it benefits not just Panther Creek’s indoor percussion and winter guard programs but the marching and concert band programs as well.

As the clock ticks towards the competition, time and temperature may be on Panther Creek’s side–by Saturday the weather may hover around freezing with some sun…and luckily, no snow. Come out to support the hard work of Panther Creek students, teachers, and volunteers–as well as other schools–this weekend.