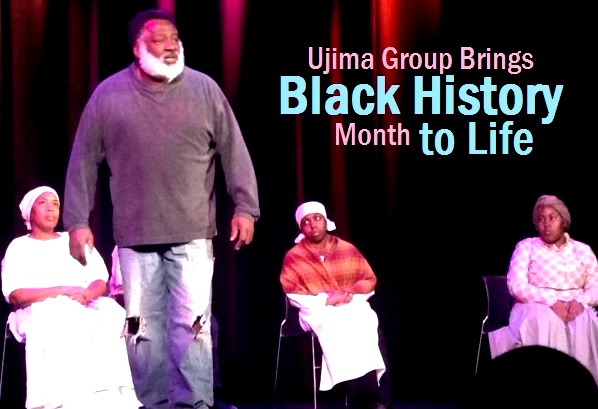 “In Their Own Words: Enduring Slavery & Freedom”

Cary, NC — Historical dramatizations and a lively drum circle marked the 18th annual African-American Celebration of Black History month at The Cary Theater this past Saturday, February 21, 2015. The Ujima Group, Inc produced the event in partnership with the Town of Cary.

The event opened with a recitation by Vanessa Scott of “Lift Every Voice and Sing” by James Weldon Johnson. This song has been called “the Black Anthem” and was also recited at the inauguration of President Barack Obama.

Next, Lester Thomas, president of Ujima, was introduced. He spoke about the many inventions that Black Americans have created including the air conditioner, the lawn mower, the electric lamp, the internal combustion engine, and the typewriter.

What is Black History Month?

The purpose of Black History month, and of this celebration in particular, is to remember that the processes of desegregation and achieving equality are not over for African Americans. But also, like we remember the Holocaust, it’s important to remember from these past experiences of slavery and the story of the black experience here in America. By doing so, we encourage tolerance and empathy between races.

Black History month was officially created in 1976 after the nation’s bicentennial, but it began much earlier. In 1925, Carter G. Woodson first introduced the concept of a Negro History Week. As a Harvard-trained historian, he came to realize that African-American contributions and inventions to the world were not found in traditional history books.

By Woodson’s death in 1950, Negro History Week had made much progress in bringing more Americans to appreciate the celebration and the contributions African Americans have made to making this country as great as it is.

I attended this event, as a non-black, partly out of curiosity. I had never been a part of a black history celebration, and I had heard the entertainment would be high quality.

I was not disappointed.

After Mr. Thomas spoke, and opened my eyes to new information that I never learned about in my own American History, five actors took their places on the stage. Then, they performed “In Their Own Words: Enduring Slavery & Freedom.”

Each actor portrayed a slave who had been liberated after the Civil War that was speaking decades afterwards as an old, free negro. They spoke of their experiences in a historical context based here in the Triangle.

One woman spoke of being a child on the plantation and how slaves were punished. She told of how her mammy and pappy had so many children and how they escaped during the war by riding in a mule wagon and hiding in the woods by day and traveling at night.

Another woman spoke of having been treated relatively well by her owners. They had held a big wedding in the yard for her and her husband but, afterwards, they were only able to see each other on Saturdays and Sundays.

Another actor said that he had no love of Abraham Lincoln. “He freed the slaves” but left them no choice but to stay on their former masters’ plantations to work, as there was no place for them to go to work after slavery. He said the problems he sees today have their roots in slavery, with the lack of a strong family unit, when, in the past, families were separated to be sold.

These stories, while historical fiction, helped people remember that this was the way of the South, as well as Wake County, not so very long ago.

After a brief intermission, the Bradley Simmons Ensemble gathered on stage to delight the audience with rhythmic songs from their drum circle. They then explained their instruments and took questions from the audience. Three dancers in African-inspired dress joined them for one piece. They came down into the audience and encouraged folks to join them on stage.

Cary has a diverse population and a rich past. As a fairly new (16 years) resident of this area, I was curious and pleased to attend an event such as this, and I plan to attend again. It was both enlightening and inspiring to hear the stories and enjoy the music.

How To Prevent Damage from Frozen Water Pipes
Scroll to top