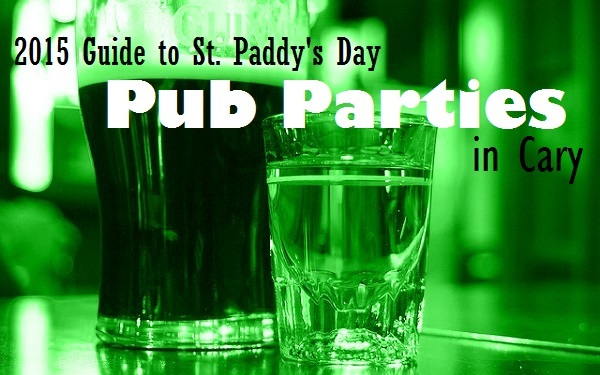 Cary, NC — Cary doesn’t have a big St. Paddy’s Day parade, but we do have several Irish pubs that like to celebrate the day that the snakes were driven out of Ireland. We took a look around town and found this list of festivities for you.

This year, St. Patrick’s Day falls inconveniently on a Tuesday, so many people will try to celebrate early–on the weekend before–when a few beers won’t spoil the work day.

Come out Friday, March 13, 2015 at 10 pm to get warmed up for St. Paddy’s Day with David Condon, a singer/songwriter based in Raleigh, NC. His style of music runs the gamut (from Irish Drinking Songs to Classic Rock and Modern Acoustic Pop).

Doherty’s kicks things off Friday, March 13, 2015 with live music from the band “Nine Times Around” playing from 10 pm until closing. They follow up on Saturday with their 3rd annual “Parking Lot Party.” A portable stage will be set up in their parking lot to feature live music, bag pipes, and performances from Irish dancers. There will be mobile taps in a closed-off area outside for people to enjoy a pint or two of their favorite beers and cider.

Food will be served inside the restaurant. Music starts at 4 pm with Faol Liath followed by Mike MickXer at 7 pm. An after party is advertised starting indoors with the band Shine at 10 pm. In case all that isn’t enough, Doherty’s will serve a festive brunch on Sunday to work off those hangovers. Enjoy live Irish music from Kevin Kendall starting at 11 am.

Hibernian will be hosting a street fair at the Cary location on March 14, 2015. Come visit local vendors, hear live music, and enjoy great food and drink specials. Festivities will be between 11 am and 5 pm, but you can celebrate St. Patrick’s Day until 2 am.

On Saturday, March 14, 2015, stop in to Tra’Li after the Raleigh Parade. Starting at 4 pm, and going on all evening, Tra’Li has a line up of live Irish music with The Roscommoners, Eric the Piper & Last Trip Home, and Rob Sharer & Will McCanless.

There will be fiddles, flutes, guitars, bodhran drums, and uilleann bagpipes. Irish dancers from Rince na h’Eireann and Inis Cairde schools of Irish Dance will also perform. Expect liberal pouring of Guinness and traditional Irish Food along with the best in Irish Hospitality.

Even if you don’t have a drop of Irish blood in you, it’s fun to go out and celebrate anyway. Enjoy this list and let us know if you visit any of these locally-owned establishments. Their warmth and hospitality extends well beyond March 17 every day of the year–and that’s no blarney!

This recent addition to the Downtown Cary scene opened last month amid rave reviews. Live music with Shanachie will begin at 7 pm, and the chef has put together a great Irish-inspired limited menu with favorites like corned beef & cabbage and Shepherd’s Pie. Crosstown will also be raffling off a brand new Guinness-themed Ogio golf bag and a couple sleeves of Guinness-themed Titleist ProV golf balls.

Doherty’s will be back at it on Tuesday, March 17, 2015 with live Irish Music from Pete O’Dea starting at noon for lunch customers. They follow that up with more live music for the dinner crowd starting at 6 pm with Tom Neuhauser. After that, I think the staff at Doherty’s will collapse from all the celebrating!

This family-owned tavern will feature Irish food specials during the day, including corned beef brisket & cabbage, Reubens, and fish & chips all priced at $6 and an Irish potato cakes appetizer for $4. Drink specials include Guinness 20 oz. drafts for $6 and all Irish bottled beers (Killian’s, Smythwicks, Harp, Guinness Blonde, Harpoon Celtic Ale, and Magners) for $3. Get festive with Jameson Jello shots for $2.

To add to the merriment, a DJ will be playing all your favorite Irish songs from 7-11 pm, and guests can win prizes all day long.

Rally Point Sport Grill will have a special homemade Irish menu that includes Shepherd’s Pie, fish and chips, and Guinness Stew. Lively performances by Irish dancers will start at 6 pm.

This neighborhood pub, located right next to the West Park Neighborhood on NC 55, will have plenty of drink specials for celebrating. Jameson and Tullamore Dew Irish whiskeys will be $6. The bar has created fun specialty drinks, including Irish Pirate shots for $5, Irish Car Bombs for $6, and Lucky Leprechaun Martinis for $7. Guinness on draft will be $5 each.

If you are looking to attend a parade, head into Raleigh where the 33rd St. Patrick’s Day Parade will take place on Saturday, March 14, 2015 starting at 10 am. The parade starts on Wilmington Street near the Capital and finishes at the Convention Center. There will be food vendors and stalls along the route and two stages with live entertainment.

As always, the parade includes schools, bands, and any number of interesting marchers. Prepare to arrive early to park and get a good seat!