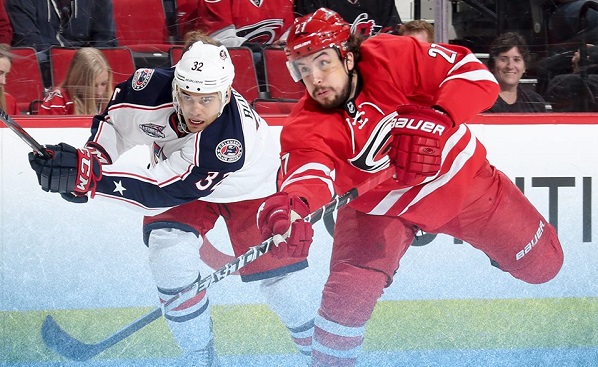 Raleigh, NC — The Carolina Hurricanes took a hard loss of 4-3 in a shootout against the Columbus Blue Jackets Tuesday, March 10, 2015 at the PNC Arena.

With the win, Columbus stayed just in front of the Canes in the Metro division. If the Canes won in regulation, they would have “leap-frogged” for 7th place. Overall, the Canes are tied with Toronto with 58 points but have played two fewer games.

The Canes won the opening face-off and wasted no time in getting on the scoreboard. After Sergei Bobrovsky made a save off a quick shot by Nathan Gerbe, the face-off was to his left.

Jordan Staal cleanly won the puck over to Gerbe, who banked a pass up to Justin Faulk on the right point. Faulk deeked his defender then took a couple of strides towards the goal and let go a strong wrister with both Gerbe and Staal out in front making the goalie’s sight of the puck impossible. Midway in the period, the Canes had their first powerplay of the night, after Eric Staal was nailed in the back by a cross check right in front of the side boards.

Again, the Canes wasted no time in converting the man advantage. EStaal won the faceoff, passing over to Elias Lindholm along the half boards. Lindy passed up to Faulk who saw Victor Rask lined up in the far face-off circle.

Rask, who is still so young but has some of the best hockey smarts on the team, took a page out of EStaal and Jeff Skinner’s book about firing high and hard from the inside the circle and put it in for a 2-0 Canes lead. The Blue Jackets cut the lead on a powerplay after a tripping penalty by Ron Hainsey, and the Canes went up by two again on another powerplay goal with just ten seconds to play in the first.

EStaal took the puck from just inside the blue line to the top of the circle, passing back up to Faulk. With Hainsey going to the bench, Ryan Murphy came onto the ice and skated hard into the offensive zone. Faulk dropped a nice feed that allowed Murphy to slam a slap shot in stride that EStaal was able to tip in for a 3-1 lead.

The Tilt of the Ice Shifts

The second period looked like a different game, and the ice seemed to be tilted for Columbus. The Canes “#1 in the NHL penalty kill ranking” has to fall after this, and the Oilers’ game, as the Canes gave up another powerplay goal early in the period.

The fore-checking by both teams was tight, as both teams had about half the number of shots on goal in the second as they each had in the first. Cam Ward was challenged on several shots but made athletic saves. Scott Hartnell scored on the powerplay after Ward made a stop but failed to cover up, and the defense didn’t clear the traffic, allowing Hartnell to poke his stick between the defense and shovel the puck in for a goal.

The PK team of Gerbe, Pat Dwyer, Jay McClement and Riley Nash, while the results don’t show it, did very well clearing the puck several times and using their quickness and speed for several rushes in the Jackets’ end. While the play up to that point may have been even, the momentum was in the Blue Jackets’ favor after.

PK #1 in NHL in Jeopardy

Both teams started out the third like they actually wanted to win the game. Hits were more often (a stat the Canes always lags opponents), shots increased for both teams, fore-checking was tight, and you could see the testiness after a stoppage of play.

After Faulk got called for a crosscheck against Hartnell, Hartnell got the ultimate revenge when he scored the powerplay goal to tie the game. Columbus turned on the jets during the overtime, putting four shots on Ward, as the Canes were only able to get one shot off in the extra period.

If anyone was on the fence about their like or dislike of shootouts, this one was one to forget. All three Canes not only missed but looked pitiful on the attempts. The Jackets weren’t much better but, in shoot-outs, it only takes being better by one–even if the “one” is the only one scored.

The next home games are Thursday, March 12, 2015 (tonight) against Dallas and Saturday, March 14, 2015 against Florida. Great seats are available.

In the last game, several “Caryites” were shown on the Jumbotron–some dancing, some kissing, some high-fiving…and all having a great time.