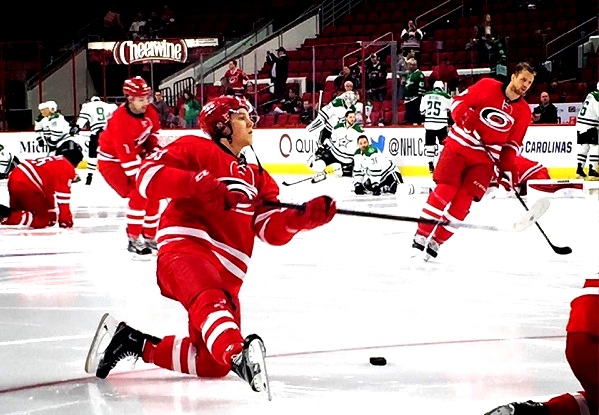 The Carolina Hurricanes lost to the Dallas Stars 5-3 on Thursday, March 12, 2015 at the PNC Arena in a game that wasn’t as close as the score. The Stars are in a desperate state to make the playoffs, which looks like a long shot, but–if they play like they did against the Canes–they could make a wild card slot.

The Canes opened the scoring early in the first with the exception of Anton Khudobin in goal, a line up of players in their first year on the Canes. Victor Rask continued his impressive rookie season by winning a face-off that came back to Michal Jordan on the left point.

Jordan passed along the blue line to Brett Bellemore who took a quick shot through traffic. Stars goalie Kari Lehtonen made the save off his chest protector leaving the puck in the sweet spot of the crease. Rask, who has ice-smarts well beyond his years, went through the crease and put a nice backhander on the puck into the net for the early 1-0 Canes lead. 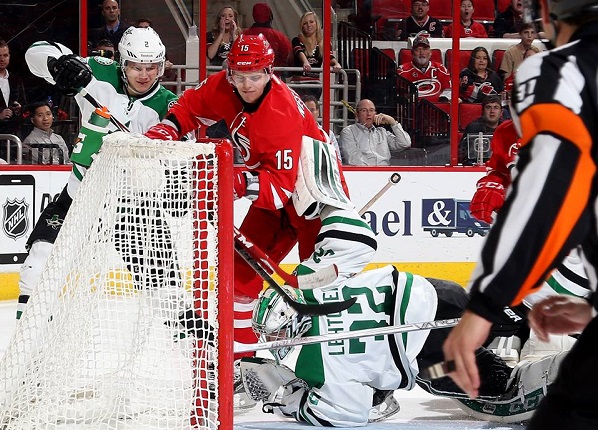 The goal was Rask’s 10th of the season. The last two Canes who scored ten goals in their rookie season were Jeff Skinner and Eric Staal. After that goal, it was all Stars for the next 45 minutes of the game. The Stars scored three in the first, as the Canes looked flat on their feet and were chasing the Stars on nearly every play.

There was no scoring in the second, and the Canes had to be glad it was still only 3-1 after that. The Canes had seven shots on goal, but none were serious scoring chances, whereas the Stars had ten. Dobby had to be, and was, sharp on save after save.

Dobby has a tendency to give up more rebounds than Cam Ward, but his reaction to follow-up shots is nothing short of amazing. With his personality and reputation for on-ice chatter, one can only imagine what comments he has after stopping what an opponent thinks is a sure goal.

Canes Make an Attempt at a Comeback

Midway through the third, the Stars all but put the game away when the Stars top line scored on a tip-in. Again, the Canes had a very young line on the ice with Skinner being the old man with the most NHL experience. Cody Eakin was able to get the tip-in, as he was untouched just to Dobby’s left on a poor defensive effort.

Give the Canes credit as, a couple of minutes later, the young guns pulled through with a couple of goals. Ryan Murphy brought the puck out of the Canes’ end, passing up to Rask. Rask entered the Stars’ end and then took a quick shot on goal. Both Andrej Nestrasil and Chris Terry took whacks at the puck with Terry knocking it home to close the gap.

On their next shot, the same line had the same result. Rask won another face-off in the Stars’ end, drawing back to Bellemore. Bellemore sent a wrister on-goal with Nestrasil on the doorstep of the goal putting in the rebound to get the Canes within one and bringing life back into the Caniacs. That goal, and maybe because it was the young guns, gave life into the rest of the Canes, as all players improved their play.

Former Canes player Patrick Eaves sealed the victory for the Stars by sending a 190’ shot into an empty net. Too little too late, but something to build on. Rask was a +3 on the night, which says something about his play when you’re on the south end of a 5-3 game.

The Carolina Hurricanes closed out their recent home stand on the losing end in a 2-0 game against the Florida Panthers on Saturday, March 14, 2015. Like the Canes’ last opponents, the Dallas Stars, the Panthers are on the outside looking in at a wild card spot for the playoffs.

The Panthers were buyers at the trade deadline, picking up future Hall of Famer Jaromir Jagr, and have their eyes set on making the playoffs by relying on Jagr and other veterans like former Cane Jussi Jokinen.

Canes Stronger in the First

In the game against the Stars on Friday night, the Canes seemed to come alive in the third period and needed to build on that. Maybe because the Canes know every game is critical for the Panthers, or maybe because they were playing their fifth game in nine days with not the greatest results, the Canes came out of the gate with something to prove. 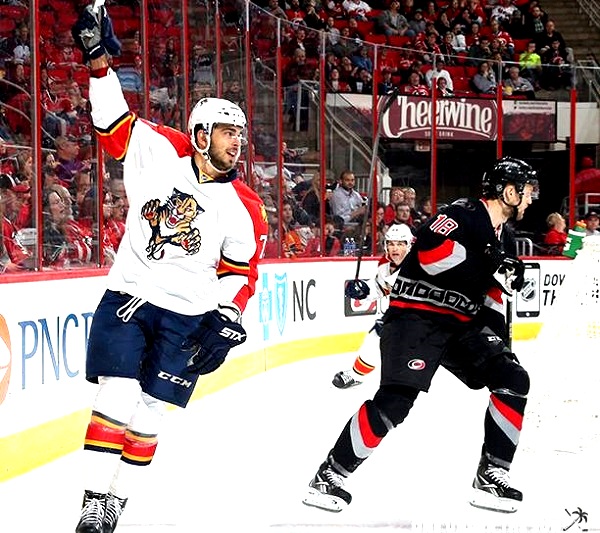 They were the more aggressive team, sending 15 shots at former Canes’ goalie, Dan Ellis, while the Panthers only had eight on Cam Ward. The Canes may have had more, but the quality of shots was in the Panthers’ favor. Midway in the period, the Panthers were putting pressure on the defense with good puck possession and crisp passing.

On one play, Brandon Pirri got behind the defense and thought he had a sure goal, but Ward was able to make yet another unbelievable save, adding to his impressive 2014-15 resume.

The second period started out similar to the first, with tight checking and play getting a little chippy with no love being shared between the two teams. Just 15 seconds into the period, Eric Staal got called for a hooking penalty, aka Ron Francis style, with Nick Bjudstad getting the call for embellishment.

A few minutes later, fan favorite Nathan Gerbe didn’t care for the love tap to his head and let his half foot taller opponent know it with a swift retaliation to Steven Kampfer. Brett Bellemore stepped in in case things went ugly, but the linesmen had everything under control. Late in the period, Chris Terry got called for holding the stick.

Jimmy Hayes brought the puck into the Canes’ ends, passing down to Pirri. Pirri started to circle the net but sent a slick backhander high short side that may have caught Cam off guard for what turned out to be the game winner.  The Canes were only able to get four shots on net in the period, none challenging Ellis.

If the Canes wanted to end this home stand on a positive note, they needed to come out and have every shift, every play, every pass, every check mean something. While their play in the third was their best of the game, it wasn’t enough.

Too much of the game was in the neutral zone and, while the Canes did get off eight shots, they didn’t get any shots off rebounds, and most shots weren’t serious scoring opportunities. Not to take anything away from Ellis–he and his team, with a defensive corps that is huge and did a good job clearing the Canes from the crease, the Canes needed the offense to step up.

After Ward was pulled, former Cane and fan favorite of several ladies in Cary, Patrick Eaves, sent in an empty-netter to seal the win for the Panthers and keeping their playoff hopes alive.

The next home game is Tuesday, March 17, 2015 on St. Patrick’s Day against Ottawa. It is also the annual St. Baldrick’s Night.

The first 200 fans willing to shave their heads in support of St. Baldrick’s prior to the game on the arena’s South Plaza will each receive two tickets to the game against the Ottawa Senators and have their picture taken with the Eye Care Associates Storm Squad.

Canes coverage by Bob Fennel. Photos from the Carolina Hurricanes and the Florida Panthers on Facebook. Read more Canes coverage.

Don’s Blog: Breaking Up is Hard To Do