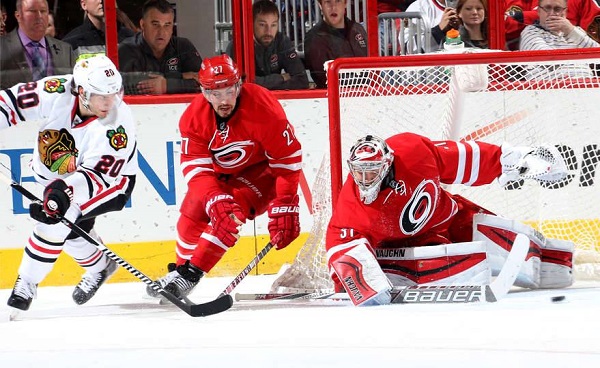 Raleigh, NC — On Monday, March 23, 2015, the Carolina Hurricanes lost a tough battle, 3-1, against the Chicago Blackhawks at the PNC Arena.

When the game started, it looked like it was going to be a very long night for the Canes. The Hawks scored on their first two shots of the game, shocking the Canes and the Caniacs.

Anton Khudobin was in goal, possibly because of his strong outing against the Rangers two days earlier. With the Blackhawks doing a very good job controlling the neutral zone, they were constantly setting up for a methodical entry into the Canes’ end.

After moving the puck freely with little effective defensive pressure, Patrick Sharp sent a pass to Marcus Kruger behind the net. Kruger saw Andrew Shaw untouched between two defenders and sent a simple pass that Shaw sent past Dobby with a quick one-timer.

Just over a minute later, ageless wonder Marian Hossa had the puck along the far boards just inside the blue line, when he eyed Sharp coming down the middle with no defender within ten feet. Hossa sent a beautiful lead pass, and all Sharp had to do was angle his blade to redirect the puck into the net for a quick 2-0 lead.

After that play, it was a wake up call for the Canes as they pumped eight shots on Corey Crawford in the last nine minutes of the period with none finding the back of the net.

According to Rod Brind’Amour, Peters had a few select words of encouragement during the first intermission. Whatever was said seemed to work, as the Canes continued to turn on the heat and got off an impressive 19 shots, several of which were quality scoring chances only to be thwarted by Crawford.

Nathan Gerbe continues to earn the respect of Caniacs and visiting fans, as his play and enthusiasm on every shift is full of effective energy. There are some current and former Canes that may play with energy but are far less effective. Gerbe continues to bring his game every night, and whatever line he’s on is pure entertainment. 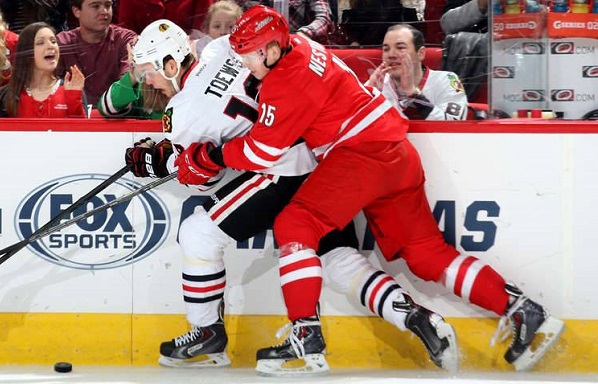 Just under the four minute mark, John-Michael Liles was deep in the Canes’ end and made a hail Mary pass to Eric Staal at the Blackhawks’ blue line. Staal, barely on side, collected the puck, turned on his jets, maybe closer to a couple of propellers, then went right for the net.

The puck started to slip off his stick, but Staal was able to get off a backhander that Crawford stopped, and Victor Rask was there for sending home the rebound to close the gap 2-1. Rask’s on-ice smarts continue to get better and better.

With that goal, he tied EStaal’s goal total in his rookie year but was well short of Jeff Skinner’s franchise record of 31. Justin Faulk lead all Canes with nine shots, while Elias Lindholm lead all forwards with six shots on net. The big bodies of Jordan Staal, Riley Nash and Andrej Nestrasil were in the dirty area of the crease most of the night paying the price on every shift.

While the Hawks got off ten shots in the third, most were one and done, as the Canes were pouncing on every rebound and covering Hawks like a blanket. The Canes sent 15 shots on Crawford for a game total of 44. While every Caniac is having another hard year, this season has to be hard for Blackhawk fans. The Hawks put in an empty netter to close the game 3-1.

Caniacs Should Have Such Woes

The Hawks have a very solid team, but streaky, with long winning and losing streaks with some losses against much weaker teams. Losing their top scorer, Patrick Kane, hasn’t helped, but the team has picked up their play and will only be more of a force when he returns.

Make no mistake, any Caniac would like to be in the position of the frustration a Hawk fan is going through. The only question they have now is how far will they go in the playoffs.

The Canes home stand continues this Thursday, March 26, 2015, when the Penguins come to town at 7 pm. The last two games have had many, some would say too many, opposing fans in the PNC Arena. The Penguins usually have a strong following, so, if you can make it to the game and have a loud Caniac voice, there are excellent seats still available.

Earth Fare at Park West: An Inside Look