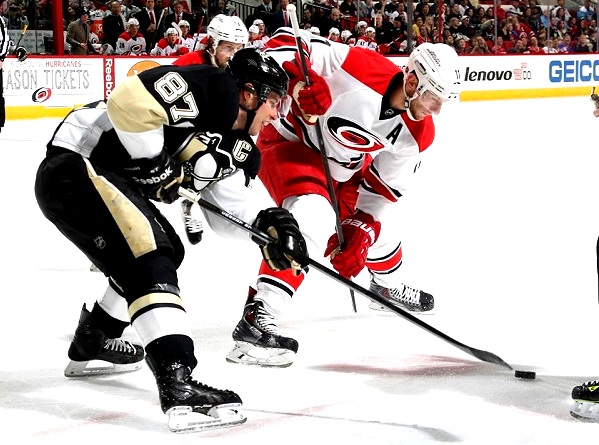 Raleigh, NC — The Carolina Hurricanes stayed busy at the PNC Arena last week. On Thursday, March 26, 2015, they beat the Pittsburgh Penguins 5-2. Then, on Saturday and Sunday, they beat the New Jersey Devils 3-1 and lost to the Boston Bruins 2-1.

The Carolina Hurricanes played one of their most impressive games of the year in a 5-2 win over the Pittsburgh Penguins on Thursday, March 26, 2015 at the PNC Arena.

The Penguins are playoff-bound and, despite missing a couple of top players, are still one of the better teams in the east. Jordan Staal really enjoys playing against his former team; he enjoys winning more and did an excellent job when matched against superstar Sidney Crosby.

Cam Ward started in-goal for the first time in five games due to the flu, which caused him to lose about ten pounds that he didn’t need to lose. He was sharp early-on, as the Penguins needed to pick up their play. They’ve been in the midst of a slump but started strong.

After Ward made a save, the Canes were clearing the puck when Sidney Crosby pick-pocketed JStaal then sent a pass into the high slot to Ben Lovejoy, who shot high. Crosby went behind the net to retrieve the puck and sent a centering pass into the crease to former Cane Brandon Sutter (whose first shot was stopped by Wardo).

Sutter was able to stuff the rebound under the pads for an early 1-0 lead. Two mistakes were made–the turnover and Sutter untouched in front of the goal have to be addressed if the Canes are going to improve in the game and as a team going forward. While both teams were still on the same four-on-four situation, Michal Jordan sent the puck into the Pens’ far corner.

The defense was clearing the puck behind the net, but JStaal used his long reach and intercepted the puck and saw Eric Staal get free out front. Brother passed to brother, and EStaal sent a hard wrister in the far corner for one of his signature goals.

Brad Malone was back in the lineup after a couple of games as a healthy scratch, and he had an edge to his game. After coming out of the penalty box from his second penalty, Malone had the puck down on the left wing and, maybe because of the edge he showed early in the game, he was given extra space and time.

Malone waited and saw Ryan Murphy coming down with speed on the right side then sent a pretty cross-ice pass right on Murph’s tape. He buried the shot for a pretty goal for a Cane lead, and the Canes never looked back.

The second period started out with end-to-end play that was excellent to watch. With the Canes playing lights-out and the Pens desperately needing the win, watching certain players and the battles off the puck was a game, in itself, that you can only enjoy at the arena.

With both teams forechecking well, shots making it to the nets were limited, but, when they did both, Wardo and Marc-Andre Fleury were making highlight reel saves. One save Wardo made in the first was shear robbery.

Midway in the period, Justin Faulk carried the puck out of his end, through the neutral zone, and passed off to Malone on the left wing. Again Malone waited and then saw Jay McClement entering the O-zone down the center. He made the pass with McClement scoring on a very impressive wrist shot using the defender as a screen.

A little over three minutes later, the Canes scored on a goal every coach draws up on a board from Pee Wee hockey to the NHL. Riley Nash carried the puck through the neutral zone in the center and passed to EStaal just as he crossed the Penguins’ blue line.

Staal passed back to Nash, who then passed over to Alex Semin, who was cutting to the net on the right side for a simple tip in. This was the first time all season that EStaal and Semin scored in the same game.

The Canes’ power play kill returned as they went five-for-five on the kill, which has been one of the few bright spots this season. Another noticeable improvement was that assistant coach Rod Brind’Amour earned the credit for the powerplay.

On the Canes’ last powerplay of the game, Elias Lindholm was strong on the puck along the half boards. He passed to EStaal in the slot and quickly passed to Andrej Nestrasil, who was camped out on the left post and who banged it in for a solid 5-1 Canes’ lead. 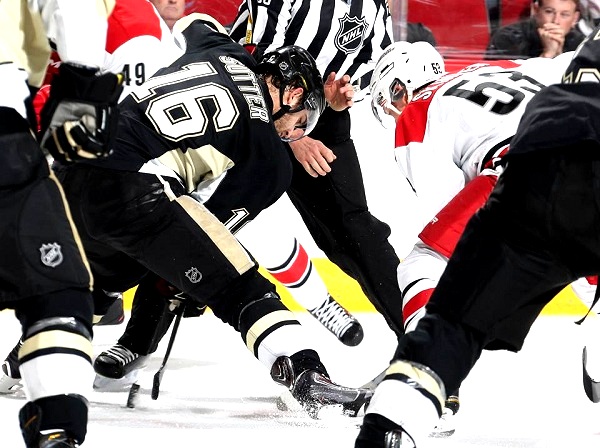 The Penguins ended the scoring when former Cane Craig Adams passed to Ian Cole, who sent a long slap shot off the crossbar that Wardo never saw with all the traffic in front. This was a highly entertaining game–a great outcome for the home team and a well-deserved win.

The Canes are officially out of the playoffs, but they have been playing their best hockey of the year and are a team that few playoff bubble teams want to go against.

Cam Ward was between the pipes Saturday, while Anton Khodobin went against the Bruins. Both goalies had great games; Dobby just needs the Canes to put pucks in the opposing net.

The game started out with officials sending a message that it would be a tightly-called game, as there were some ticky-tack calls that were more “hard hockey” plays than game-altering plays. The Canes were unsuccessful on their first two attempts and just couldn’t get the mo-jo going in bringing the puck into the offensive zone with the man advantage.

Jeff Skinner was about to be sent into next week along the boards and put up his stick in defense, getting a cross-checking penalty in the process. Dobby stopped the puck behind the net and passed to Ron Hainsey in the corner.  Hainsey needed a teammate to tell him he had more time, as he turned and immediately sent a wrister about 4’ in the air.

Mike Cammalleri knocked the puck out of the air then sent a simple shot along the ice that Patrik Elias tipped past Dobby for the 1-0 lead. Very late in the second period, Victor Rask carried the puck across the Devils’ blue line, passing to Skinny on the left wing.

Stealing a play from Brad Malone’s book from the previous game, Skinny waited then sent a cross-ice pass to Chris Terry who sent one in far side off the post to tie the game and, more importantly, to give the Canes and Caniacs momentum going into the third.

Jordan Staal won the initial faceoff in the third, drawing the puck back to Ryan Murphy. Murph entered the Devils’ end and then sent a shot on-goal with Eric Staal going hard to the net.

Devil goalie Keith Kinkaid made the blocker save, but EStaal made a veteran move by lifting the stick of the defender then sending a quick shot in for the fastest goal starting off in a period all season–nine seconds.

With all the disappointments this season, there have been several bright spots, and one has been the play of Elias Lindholm. EStaal brought the puck into the Devils’ end, dropping it off to Lindy. With a defender draped all over him, Lindy was able to muscle a pass up to Justin Faulk on the right point. Faulk, in what’s becoming a lethal weapon, sent another bomb that cleared the traffic but found the back of the net for the insurance goal.

On Sunday, March 29, 2015, the Boston Bruins were in town for a rare 5 pm game. With the weather cooperating, several Caniacs were doing what they do best in the NHL: tailgaiting. 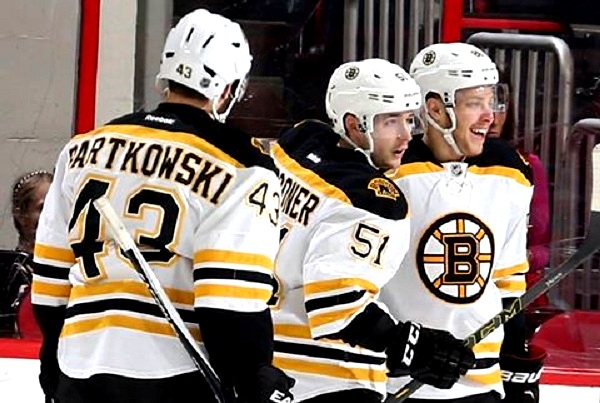 An “In Your Face” Team

The Bruins are currently in the playoffs as a Wild Card and need every point. While the Devils played with a slow pace, trying to tie-up the neutral zone and push everything to the boards, the Bruins are an “in your face” type of team. They’re great at chipping the back of the Canes’ legs behind the play, and they’re always willing to give the extra shove after the whistle.

At one point, fan-favorite Nathan Gerbe made a power move with a shot on-net and ended up in the crease following the shot with three Bruins grabbing and shoving him. 6’9” Zdeno Chara showed his sportsmanship with a face wash, while two teammates were holding Gerbe.

Boston struck first early in the first when rookie Ryan Spooner got a pass while going through the slot and was able to get off a shot that beat Dobby. The game continued to be very entertaining with strong goal-tending by both keepers and plenty of end-to-end action.

One statistic that is somewhat hard to believe is the hits. The official scorer gave the Canes credit for a season high of 49 hits. He even gave Alex Semin credit for three hits and, if anyone was watching his play, they were more like polite shoves.

The Bruins had a chance, late in the game, to put it away on, in my opinion, one of the worst calls of the season. Hainsey broke his stick on a shot and followed the rules by immediately dropping his stick and going to the bench for a new twig. As he dropped his stick, the puck hit the stick, resulting in a penalty with less than two minutes left to play.

The Canes killed off the penalty in regulation and OT, not allowing a shot on goal. Late in the OT, Carl Soderberg was forced on the perimeter of the right side then sent a pass diagonally across the crease to rookie David Pastrnak whose one timer ended the match.

Canes coverage by Bob Fennel. Photos from the Pittsburgh Penguins and the Boston Bruins on Facebook. Read more Canes coverage.

Attract Birds to Your Backyard: Here’s How