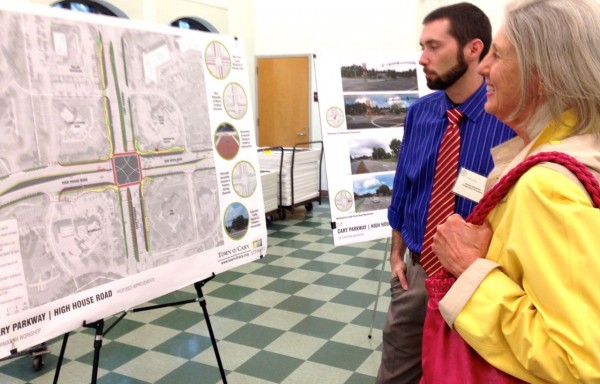 Cary, NC — Residents could view and comment on the newly revised plans to improve the intersection of SW Cary Parkway and High House Road on Thursday, March 19, 2015.

Revised Plans Presented to the Public

The plans were presented at the Cary Senior Center between 4 pm and 7 pm. For the most part, attendees seemed pleased that the former-jug handle plan had been abandoned in favor of a more traditional approach to alleviating traffic by adding additional dedicated turn lanes.

David Spencer of the Town’s Transportation and Facilities Department remembered only too well the last time these improvements came before town citizens. Three years ago, in a packed room, the original plans were revealed.

They included forced right turns and complicated jug handles for any car that wished to make left turns. He took a lot of heat back then, and that’s when he was new on the job.

Needless to say, at 5:30 pm, I experienced heavy traffic moving through that intersection myself! CaryCitizen spoke to Michael Batts of Stewart Engineering, the consultants for the new plan. He stated that:

The main goal for the intersection improvements…is, obviously, to deal with the traffic congestion that occurs every day and to do that in a way that preserves the physical character of the intersection. 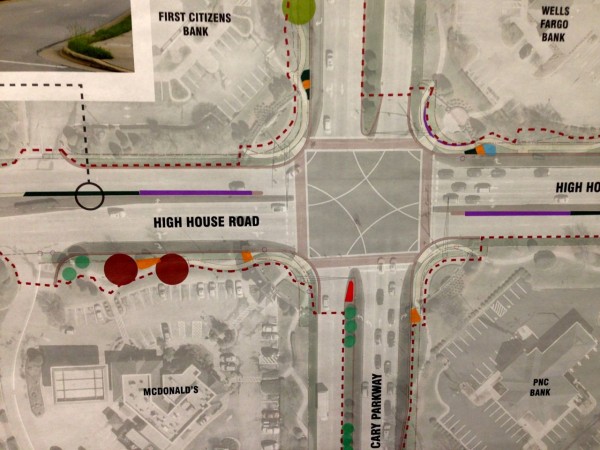 New dedicated right turn-only lanes will be added in all four directions of the intersection. No need to sneak around a stopped vehicle heading straight to make your “right-on-red” anymore!

Three years ago, many citizens expressed concern that they didn’t want the character of the intersection to change. People like the clock tower, the existing landscaping and the planted medians. How will all these lanes be added without compromising what so many love about Preston Corners?

CaryCitizen was told that, when the new lanes are added, the existing lanes will drop down to about 11 feet wide. It won’t seem much different, but having slightly narrower lanes will allow the town to purchase a minimum of easement at the four corners of the intersection and pack in the additional seven lanes, keeping the medians, the tower and the Preston Corners signs.

There will be some new striping when all the construction is complete.

While the clock tower will stay, many of the trees in the medians will have to go, because some will get narrower and will no longer support crepe myrtles and shrubs. They will be replaced with ornamental grasses and knock-out roses to soften the intersection and will, hopefully, keep the same feel that currently exists.

This may also improve some visibility. The corners will get a little sharper, which will actually slow right turning vehicles, to hopefully improve pedestrian safety.

Another thing to change, with the addition of the second left-turn lanes, is that the flashing left-turn traffic signals will be eliminated. It’s simply not safe. In their place will be hard left green or red arrows. Either you can turn or you can’t. No more fuzzy maybes.

That should also improve safety at this intersection.

Design, right-of-way acquisition, utility relocation, and construction costs totaling $3,920,000 are funded for this project. Congestion Management and Air Quality (CMAQ) funding from the Federal Highway Administration (FHWA) accounts for 76%, or $2,976,000, of this project.

Michael Batts of Stewart Engineering explained that the plans have already been approved by Cary’s Town Council. However, Cary Parkway is a State DOT controlled road, and the Town will receive federal funds to help pay for the project. The next step is to gain State DOT approval to make sure everything is in compliance with state guidelines.

After gaining approval, the town must purchase easements and right-of-ways, which are one the main cost factors for the project. Next, the work must go out to bid, and the job must be awarded to a contractor to complete. Work will not begin until at least Spring of 2016.

If you would like more information about the plans and updates, check the Town of Cary website.

Community coverage is sponsored in part by Sister Cities of Cary.