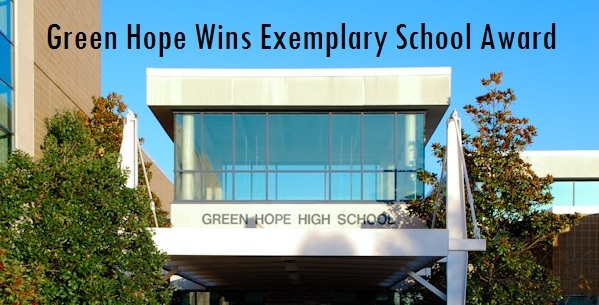 Cary, NC — 2015 has already been a big year for Cary area high schools. Two weeks ago, Cary High learned that their band would march in the 2016 Macy’s Parade (see story), and, last week, on May 7, 2015, Green Hope received the Exemplary School Award.

The Exemplary School Award recognizes the top overall school in the state in terms of the “total program,” including but not limited to athletic success, scope of athletic opportunities offered, facilities, community interest and involvement, academics and the like.

Green Hope High School, which opened in 1999, is the ninth annual winner of this award.

In 2014, Green Hope was recognized as the top public high school in North Carolina by US News & World Report. Green Hope also received the highest school performance grade (SPG) among all high schools in Wake County (from the NC Department of Public Instruction or NCDPI).

[This is] the result of great coaching, motivated young people, and a school community that supports all of our athletic programs.

Congratulations to both Cary High and Green Hope!

Make Your Yard a Wildlife Oasis