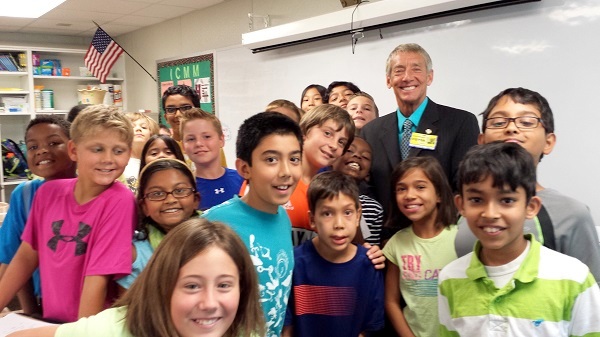 Cary, NC — This week was filled with significant events.

Monday I met with Ben Shivar, the town manager, for our weekly meeting.

This meeting was different from all the rest of our one-on-one meetings. At this meeting he told me that he was retiring at the end of September. This was quite a shock. It will be difficult for the town to replace such a remarkable person. Mr. Shivar had nothing but praises for the council and the town staff, and his reasons were purely personal.

During his time as town manager, Mr. Shivar has created a strong relationship between the council, staff and chamber. As a result, the town has the highest quality of life with the lowest tax rate and attracts employers from all over the world. His influence is in most of the successes Cary citizens enjoy today. We will miss him very much.

I believe retirement announcements may become more common as we “baby boomers” age out of the work force. It is happening in companies all around the nation, including at my job at SAS.

After the meeting with the town manager, I met with an individual and his attorney about a development on Chapel Hill road. Many of his issues and questions can be handled by staff and the NC DOT. Our meeting lasted about 30 minutes.

Later Monday night, I attended the monthly meeting of the Wake County Mayors Association. Mayors from Apex, Garner, Knightdale, Rolesville, Wake Forest and Zebulon were also in attendance. First, we heard a presentation from President and CEO Donald Gentzig about the local hospitals and their involvement in the community.

Afterwards, we heard a presentation from Rose Williams, who is the director of Governmental Affairs for the North Carolina League of Municipalities. She gave us an update on legislation currently being considered by the NC General Assembly and how it negatively impacts municipalities. Our meeting adjourned after about two hours.

Tuesday, the council held its third and final work session on the budget.

This work session focused on how to fund Open Data.

Council removed a parking standards study, reduced supplies, reduced contract services, removed a pilot program for asphalt recycling, removed planning for an online communications tool and cut two attendees to the ICMS conference. The council also agreed to a 37 cents tax rate which will keep us at the lowest tax rate in Wake County. Our meeting lasted about half an hour before we went into closed session. Council will vote on the budget on June 25.

In the closed session, the town manager notified the council of his intention to retire. I am not allowed to talk about anything else that happened in closed session.

Wednesday, I attended the June meeting of the Capital Area Metropolitan Planning Organizations Executive Board. Our agenda was mostly updates and presentations from the staff and votes on non-controversial items. The meeting lasted one hour.

Thursday started with an announcement from the Governor’s office that Proto Labs will be expanding in Cary and creating 170 new jobs over the next five years.

The company plans to invest in excess of $25 million in the Cary over the same period. Another great win for the Cary, and more good jobs within our town limits. We continue to be one of the most attractive places in the region, state and nation to live, work and play.

Thursday’s first meeting was with the owner of Cary’s minor league basketball team called the Cary Invasion. We talked about the town’s current and future financial commitment.

The Cary Invasion will start their seventh year this year and continues to be at the top of the league. This year, some of the games might be on ESPN360. The Invasion basketball team has been and will continue to be a good ambassador for the town of Cary.

Later Thursday I met with owner representatives for the Cary Town mall. They presented a concept of their future vision for the site. We talked about town processes and how difficult they were for infill developments like old malls and shopping centers. There may be a future rezoning of the mall to allow redevelopment to include residential and office.

Thursday night I had the opportunity to enjoy the Weird Al Yankovic concert at the Booth Amphitheater. The King of Parody was spectacular even after all these years. The show included most of his songs in medleys or costume. What a great show! I am glad it was in Cary.

Friday, I was honored to be a presenter at Career Day, which was held at Highcroft Elementary. I talked with three different groups of fourth and fifth graders about my duties and responsibilities. My talk also included needed skill sets and interpersonal skills to be successful in a leadership role. I was there a little over an hour.

Saturday I attended the Triangle Hindu Temples and Triangle Physicians Society free Health Fair. This health fair was open to the public and was a comprehensive health fair that covered about every medical need you can imagine. I toured the booths and met with physicians, volunteers and vendors. I also made remarks to those in attendance.

Next week will include several long nights.

There will be the annual performance review of the direct reports to council who are the town manager, town attorney and town clerk. Additionally, there will be a long council meeting on Thursday. Other events include the ribbon cutting for MetLife’s new buildings and a roundtable discussion with business leaders as part of Imagine Cary.

Well, that is all for this week. My next post will be on Sunday, June 28th. Although I have Facebook and Twitter accounts those are not the best means of communications with me. Please send all Town of Cary questions or comments to Harold.Weinbrecht@townofcary.org and email personal comments to augustanat@mindspring.com.

From the blog of Cary Mayor Harold Weinbrecht. Photo with students at Highcroft Elementary’s Career Day courtesy of Mayor Weinbrecht.

Harold’s Blog is sponsored in part by Tru Options Financial.

Sinkhole in Cary: What It Is & How It Happened

The Trash Series: Where Does Yard Waste Go?
Scroll to top