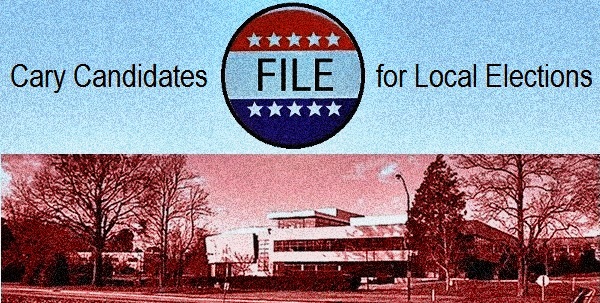 In October 2015, citizens will be able to vote for individuals to fill four open seats in Cary’s government. While voting doesn’t begin until fall, candidate filing began Monday, July 6, 2015. Several Cary incumbents and two other candidates have already filed to fill those open seats.

Cary Mayor Harold Weinbrecht and Town Council Members Don Frantz and Lori Bush have all declared their intentions to run for re-election to their current seats.

Nancy Caggia and Ken George have both filed to fill the vacant District D seat, which was formerly held by Gale Adcock. Adcock vacated her Town Council seat after she was elected to the N.C. House of Representatives last year. The seat represents central and western Cary.

Four seats are up for election in Cary this fall, including the:

Filing is Open Until July 17

We’ll publish Part 2 of this story after the candidate filing period has closed.

Town of Cary municipal elections will be held on October 6, 2015. For more information on registering to vote and voting locations, visit WakeGov.com.

You can also monitor CaryCitizen for our upcoming candidate questionnaires, where we’ll ask each candidate a series of questions, and other local voting news.

The Trash Series: My Day at the Landfill