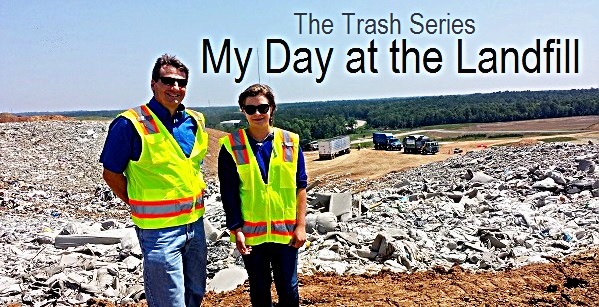 Bob Holden and I stand in front of the South Wake Landfill.

Cary, NC — Each week, we roll our trashcans out to the curb. When we get home, the trash is gone. I decided to find out where it goes–and what happens to it once it gets there.

This article is the second in a series of articles about trash. Yes, trash.

In Cary, we’re lucky to have resources like curbside trash pick-up, co-mingled recycling and yard waste collection. But where does it all go? To answer this question and more, I’ve teamed up with Bob Holden, Town of Cary’s Solid Waste Division Manager, to learn more about our trash.

Last week, Bob and I took a special tour of the South Wake Landfill–where all Cary trash goes.

My Day at the South Wake Landfill

The South Wake Landfill is located in Apex, right near Holly Springs and not far from Cary.

I was excited for the tour. That might sound weird, but, like many, I gain a sense of fulfillment from learning how something works–especially something in with which I am so closely involved. It’s important to remember that all our trash has to go somewhere, and, while I already knew that it went in the ground, I wanted to take that understanding one step further and see it for myself. 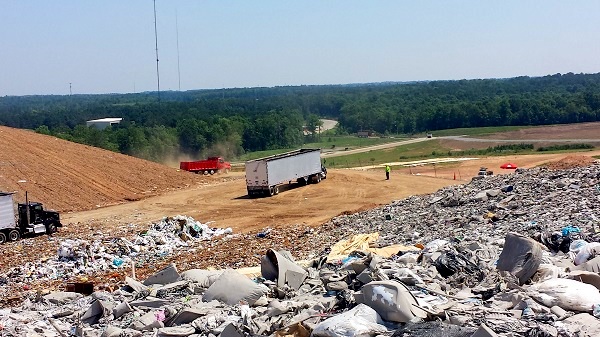 The South Wake Landfill, pictured above, is where all our Cary trash goes, along with waste from other Wake County municipalities like Apex, Morrisville, Garner, Fuquay-Varina, Raleigh, Rolesville, Knightdale, Zebulon, Wendell and Wake Forest.

There, I got to meet John Roberson, the Solid Waste Director of Wake County.

Roberson gave me a complete tour of the South Wake Landfill and told me that, each year, the landfill receives about 400,000 tons of trash. Of that, about 250,000 is municipal waste. The remaining trash, considered commercial, comes from offices and businesses. 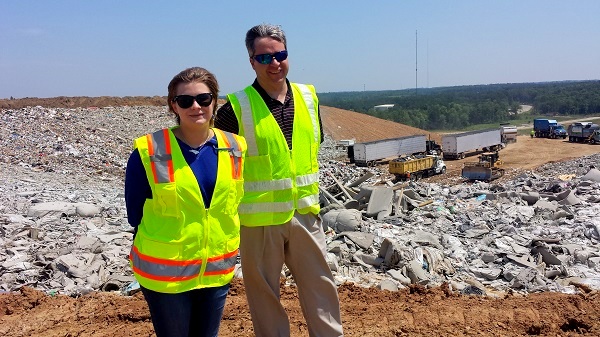 Bob and I met with John Roberson (pictured here), the Solid Waste Director of Wake County. 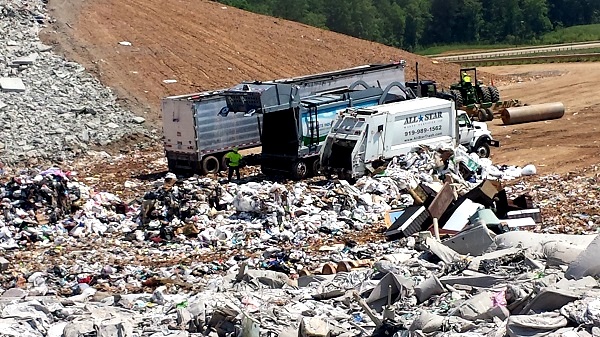 Trucks from municipalities all over Wake County drop trash off at the landfill all day.

Trucks drive up a hill to reach the landfill, and the waste is either dumped or pushed off the truck. Then, a bulldozer sweeps up the trash and takes it up the hill. Another large piece of equipment called a compactor goes over it multiple times. This compactor weighs about 130,000 pounds, and most of that weight rests on its large, spiked wheels, which chop up the garbage. 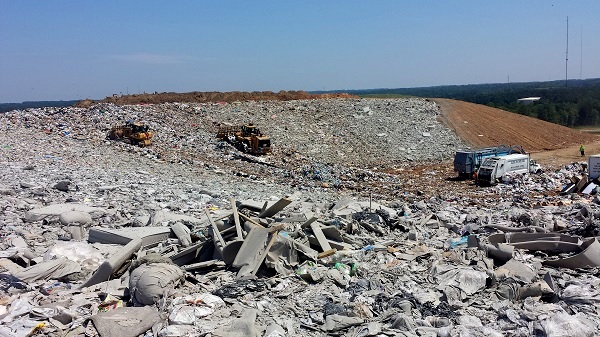 A bulldozer takes the trash up the hill while a compactor breaks it down.

The purpose of this, I learned, is to get the trash as dense and as tightly compacted as possible, fitting as many pounds of garbage as possible into a cubic yard of air space. The tighter the trash, the longer the landfill will last.

Extending the Life of the Landfill

Roberson and other officials have taken their responsibility to protect our environment and to minimize waste seriously. In fact, I left the landfill feeling informed and positive about the reality of dumping trash in the ground rather than shocked by the practice.

Yes, Roberson and other engineers work hard to extend the life of the landfill as long as they can, but sustainability efforts at South Wake go so much further than that.

For example, by adhering to strict practices, the South Wake Landfill’s life has already been extended to 10 years past engineers’ original predictions. The South Wake Landfill will last for 30 more years (at least), and, as an engineer, Roberson hopes that, by the time it is filled, the practice of disposing waste by landfill will be replaced by one that is better for the environment.

Putting trash in the ground is the least expensive way to dispose of solid waste today, but innovative, technological practices that are put to use every day at South Wake aim to reduce, reuse and recycle everything possible at the landfill. Some of these efforts include: 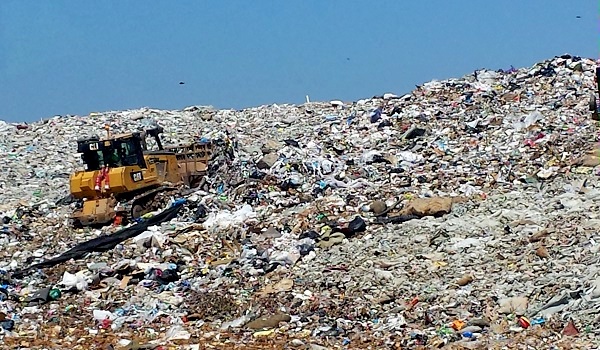 A paint mixture, which is sprayed on the landfill each day, gives the trash a gray color. 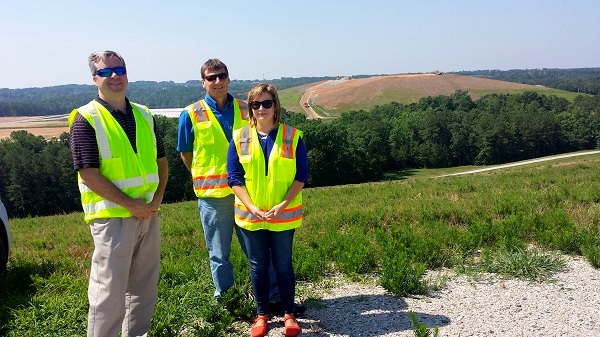 The South Wake Landfill is required to maintain this viewing hill for at least 30 years.

Wake County residents can register for their own tour of the landfill online. During the tour, you’ll see the active landfill, ride through hazardous waste and recycling facilities, see the Gas-to-Energy facility and ride to the top of a closed landfill.

Story and photos by Jessica Patrick. This article was made possible with the help of Bob Holden, Solid Waste Division Manager for the Town of Cary, and John Roberson, Solid Waste Director of Wake County. Additional thanks go to Johnny Beal, Solid Waste Facilities Manager.