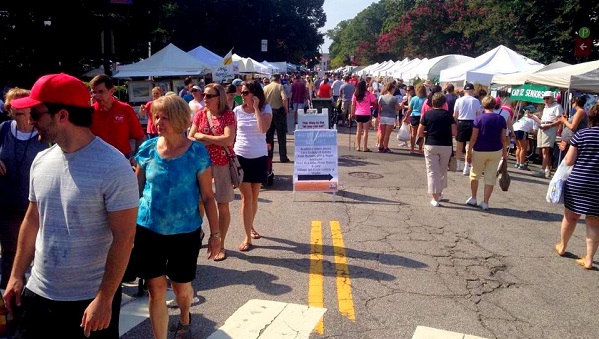 Cary, NC — Cary’s 39th annual Lazy Daze Arts & Crafts festival will take place on Saturday, August 22, 2015 at Town Hall Campus. We talked to Lyman Collins, Cultural Arts Manager for the Town of Cary, to find out what else is different this year.

Lazy Daze has been a Cary tradition for almost 40 years now.

It’s called “one of the largest single-day juried arts festivals in the United States” and draws vendors and guests from different states each year. The big news is that, this year, due to the streetscape project, Lazy Daze will move from its usual location on Academy Street to the grounds surrounding Cary Town Hall. Collins said:

Between the artists, vendors and visitors, none of us know exactly what to expect. I think  people are likely to see some of their old favorites in an entirely new way because of the changed location. They are also likely to see artists that may have been overlooked. In that sense everything is fresh – and that’s exciting!

Collins told us that the festival will circle Town Hall and include the parking lots outside of the Herb Young Community Center. “Essentially,” he said, “the artist booths will be in a large circle.”

This year, there will be 327 artist booths. When combined with concessions, civic and cultural groups and sponsors, there will be a total of 396 booths. Seven artists will give demonstrations at their booths. “The artist coming the furthest hails from Los Angeles, California,” Collins said. 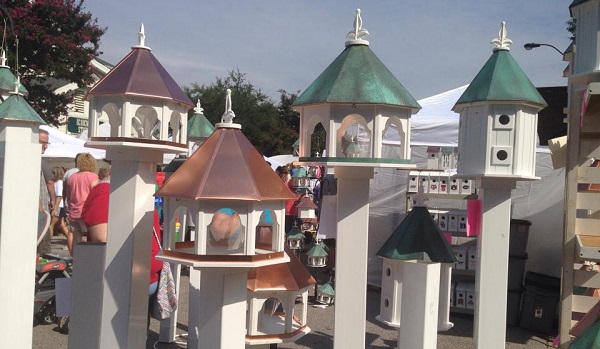 Due to the new location, Lazy Daze planners had to reduce the number of booths by 50 – but there will still be a large variety of crafts and art.

There will be two concession areas – traditional concession booths (which often feature fare from local restaurants) will be outside the south front of Town Hall. The north end will feature food trucks. Two entertainment stages will be on Academy Street, including a large stage outside the Chamber of Commerce and a smaller stage in the food truck area at Chapel Hill Road.

Like last year, the Sister Cities Association of Cary will host a beer garden at Page-Walker. This year, however, visitors will not be required to consume their refreshments inside the beer garden. The new location allows festival-goers to carry their drinks anywhere inside the festival area. Beer will also be available for purchase in the food truck area.

According to Collins, utilizing the Town’s shuttle service is the best way to reach the festival. The traditional shuttle will be running from Cary Towne Center, and a second will serve West Cary by picking up festival-goers at Green Hope High School.

There is no dedicated parking for the festival, so citizens who elect not to take a shuttle may look for on street parking or other parking lots in downtown Cary. The easiest and best way to get to the festival is to use one of our convenient shuttles. The shuttles will drop visitors off in the heart of the festival.

If you choose to drive, park along the street in Downtown Cary or in the various downtown parking lots. Cary C Tran bus routes are free for Lazy Daze, and there will be handicapped parking available at the festival for citizens with limited mobility.

CaryCitizen is sponsored in part by Thai Spices and Sushi in Preston Corners.