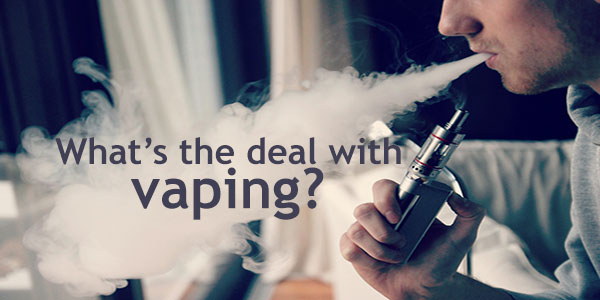 Cary, NC — At least five new vaping stores opened recently in Cary. We decided to learn more about this “trend” and answer the big question – is it really healthier than smoking?

At CaryCitizen, we pay a lot of attention to what businesses are opening around town. A couple of years ago, self-serve frozen yogurt shops were opening left and right. This year, we’ve noticed a lot of fast-casual burger and pizza joints popping up around town.

Right now, the trend is vaping stores for “e-cig” or electronic cigarette users.

We looked to vapersoul.com to learn more about vaping.

The source explains that vaping is “the act of inhaling e-liquid through a personal vaporizer, the tobacco-free version of the original cigarette.”

This vaporizer or “e-cigarette” is a battery-powered, handheld device. The battery powers the atomizer which heats the e-liquid and creates vapor for the user to inhale.

E-liquid is made up of propylene glycol (PG), vegetable glycerin (VG) or both. Unlike cigarettes, e-liquids don’t contain tobacco, but, based on the user’s preference, they can contain nicotine. The liquids are combined with natural or artificial flavors to create flavors like cinnamon, cotton candy, vanilla, blueberry cheesecake, buttered popcorn, raspberry and more.

Many are worried that vaping’s interesting flavors and popular endorsements make the practice more appealing to people. WebMD summarizes it as, “If you don’t smoke, don’t start vaping. There are no health benefits and some risks.”

There’s also a lot of talk that the chemicals found in e-liquids can be harmful, but multiple sources confirmed that the main ingredients, PG and VG, are non-toxic and recognized as safe by the Centers for Disease Control and Prevention (CDC). Nicotine is never called safe.

It’s important to note that e-liquids and vaping aren’t yet regulated by any governmental authority, although AEMSA, the American E-Liquid Manufacturing Standards Association, was created in 2012 to regulate the manufacture and distribution of American-made e-liquids.

E-liquid manufacturers aren’t required to be certified by AEMSA to make and sell their products, but many choose to. The certification consists of an application and review process along with various evaluations, amendments, scheduled and unscheduled inspections and more.

Many manufactures make their own liquids on-site, and some mix special flavor combinations for customers. Cary’s The Vape Escape on Maynard Road, for example, offers 87 flavors of AEMSA certified e-liquids that are mixed to your personal specifications on-site as ordered.

I know several former-smokers who have switched over to vaping. From what I’ve heard, people like the distinct flavors and not having to worry about secondhand smoke.

But is vaping really the better option?

Most e-liquids contain nicotine, so they’re addictive, but evidence suggests that e-cigarettes may be safer than regular cigarettes. According to WebMD, “The biggest danger from tobacco is the smoke, and e-cigarettes don’t burn. Tests show the levels of dangerous chemicals they give off are a fraction of what you’d get from a real cigarette.”

Obviously, it would be best if smokers could quit completely. But if that’s not possible, I think they’d be a lot better off with e-cigarettes. They’re a safer alternative.

According to vapersoul.com, “e-liquid comes packed in different nicotine strengths categorized in milligrams: ultra-light (6mg), medium (12mg), regular (18mg), and strong (24mg). There are e-liquids that contains no nicotine for those who just want to vape minus the nicotine hit.”

The idea is that current smokers who are trying to quit can gradually work their way down in nicotine levels until they are no longer addicted.

What Do You Know About Vaping?

Are you a “vaper?” What is your experience with vaping? Comment below and let us know.