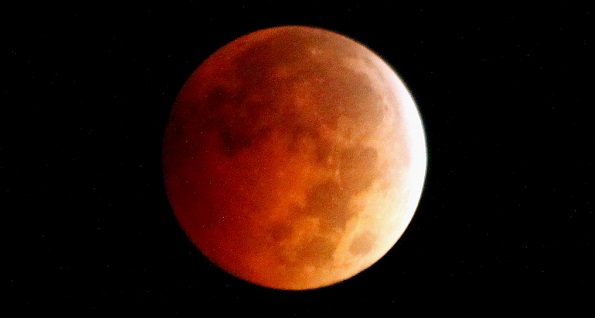 Cary, NC — This Sunday evening, September 27, 2015, a total lunar eclipse will coincide with a “supermoon” for the first time in 32 years. It won’t happen again for another 18 years.

If you’re outside this Sunday, September 27, 2015 around 10 pm, you might notice that the full moon in the sky looks bigger with a red hue. Here’s why.

A lunar eclipse is often called a “blood moon.” The event occurs when the Earth is between a full moon and the sun. The Earth’s shadow covers the moon, giving it a red glow.

In USA Today, Alan MacRobert of Sky and Telescope Magazine explained, “That red light shining onto the moon is sunlight that has skimmed and bent through Earth’s atmosphere – that is, from all the sunrises and sunsets that ring the world at any given moment.”

The lunar eclipse will coincide with a supermoon – a moon that looks larger than usual since it is closer to the earth. “There’s no physical difference in the moon,” said scientist Noah Petro. “It just appears slightly bigger in the sky. It’s not dramatic, but it does look larger.”

Lunar eclipses and supermoons aren’t rare – what is rare, though, is for them to occur on the same night. “There have been just five such events since 1900,” reports NASA.

When To See It

According to NASA, the total lunar eclipse will start at 10:11 pm Sunday evening and will last one hour and 12 minutes. You can start looking for it around 8 pm. It will be visible across North and South America, Europe, Africa, and parts of West Asia and the eastern Pacific.

“Depending on the weather, people in the eastern half of North America should be able to watch every stage of the eclipse from beginning to end,” Sky and Telescope reported.

Unlike with a solar eclipse, you don’t need anything special to see the blood moon, though binoculars or a telescope could improve the view.