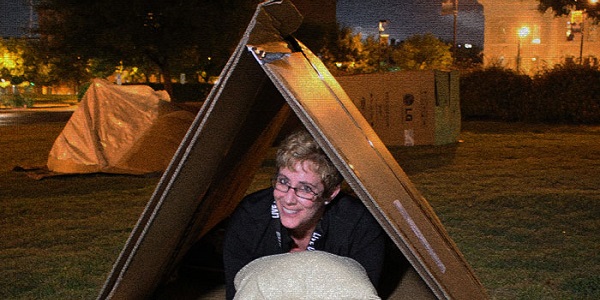 Cary, NC — I slept in a cardboard box overnight.

In & Outta My Box

I’m lucky. My evening in a box was a choice but, for so many, it is not.

Why Would I Choose To Do This?

I joined more than 20 people at the United Way “CEO Sleep Out” on the lawn of the Durham Performing Arts Center (DPAC) in Downtown Durham. The goal is to better understand homelessness and poverty and its impact in our region.

I wanted to spend a “night in their box” and also do what I could to raise the profile of homelessness in our region. By participating, we were also asked to not only help raise money for the United Way but to fully participate and learn about this compelling issue while also collaborating, and, perhaps, to make connections that might help address solutions for this important population.

The night started for me after one of the quickest Town Council meetings we have had in my four years there (14 minutes and then a quick closed session). Has to be a record, for sure.

I walked up to the lawn in front of DPAC not sure what to expect. And, on the drive there, it was raining. My head was spinning. I’m going to sleep OUTSIDE in the rain. In a cardboard box. Oh no. Have I shared how I am absolutely NOT a camper? My idea of camping is going to a hotel with no room service. Really. I’m not joking.

So doing this was WAY outta my box. Get it? Box. Haha!

A Simulation of the Homeless Bureaucracy

I joined a table, as they had just started an exercise to bring the immensity of the homeless problem to light. We used beads as representations of homeless people – the different colored beads represented different types of folks in the system (although we didn’t know WHAT they represented when we started). A single person? A family? We didn’t know. 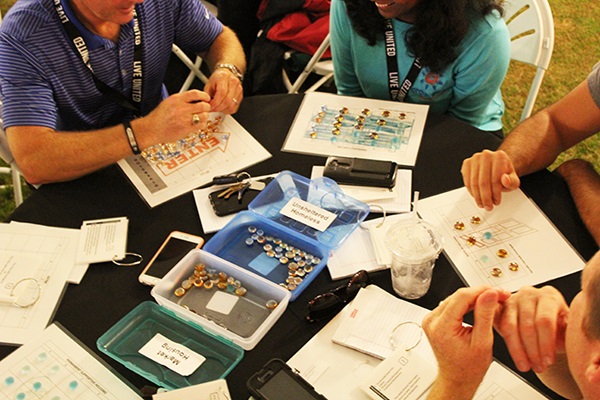 The simulation described the various roles that different agencies play when a homeless person enters the system. The goal was to get as many people out of un-sheltered housing (meaning off the streets) into Market Housing. Each of us at the table had a role to play – as an agency that works with homelessness.

From the time they enter (intake) and make their way through the system of agencies, the goal is to rearrange the pattern and funding in a way that gets the most people off the streets.

Whether we were moving people (or beads in this case) to emergency shelters (which are short term housing for no more than 90 days) or leveraging outreach programs (which provide accurate counts of those who are currently homeless while moving individuals and families into shelters), we were keenly aware that there just weren’t enough beds for all.

We had opportunities to make strategic changes – some did help the numbers, but we were still fighting an uphill battle. One of the interesting “lessons-learned” was that transitional housing, which provides service enriched housing (for 90 day to two years) including case management, after school care and substance abuse programs was one of the most expensive programs.

Our strategic move to fund more “rapid rehousing” programs, a program designed to move individuals and families out of a shelter and into a permanent home of their own, seemed to get a number of folks off the streets quickly. But NO single move is a solution on its own, that’s clear.

After that, I was interviewed by Univision.

They were there to gather information on our experiences before and after the event. 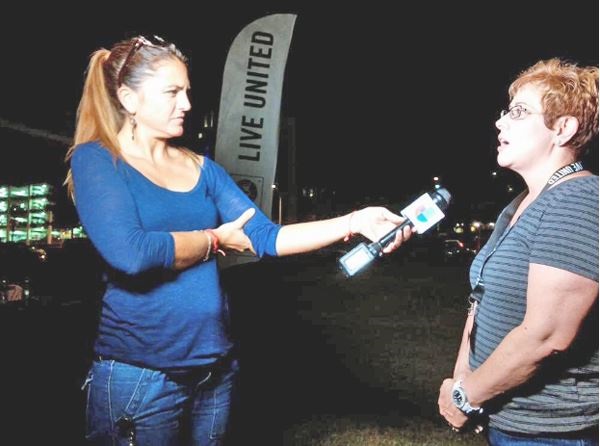 Then, we got down to business to hear from the experts – people in the field who work day to day to address this issue. We heard from folks from the Urban Ministries of Durham, who have been successful moving people out of homelessness, to Genesis Home, who recently merged with the Durham Interfaith Hospitality Network.

They spoke of the need for collaboration between agencies – understanding how they can work together and how to leverage each other skills and passions to address the issues. 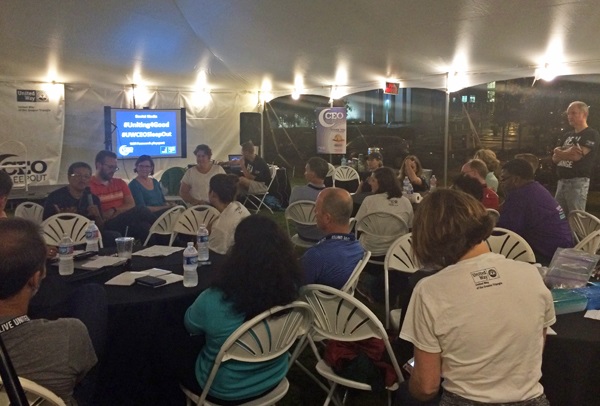 Here are some statistics:

(Small disclaimer and small world, it was exciting for me to meet Kelly, because my daughter interned at Nourish over the summer, and I heard great things about this organization.)

Kelly led us on what I would consider an exercise in social innovation. We took an idea – “how to feed a single child; to keep them from going hungry” – and stepped through what challenges and questions we might have to address that problem.

From there, we took that challenge to 100,000 kids. The scale and immensity of that problem seemed daunting but also allowed for more collaboration and innovation.

Finally, it was time to go to sleep.

Sleep, that’s what was on the agenda next. Well, at least, that’s what I thought might happen. I stepped up to the CEO Canteen to get my box and a flat piece of cardboard for the “floor.” 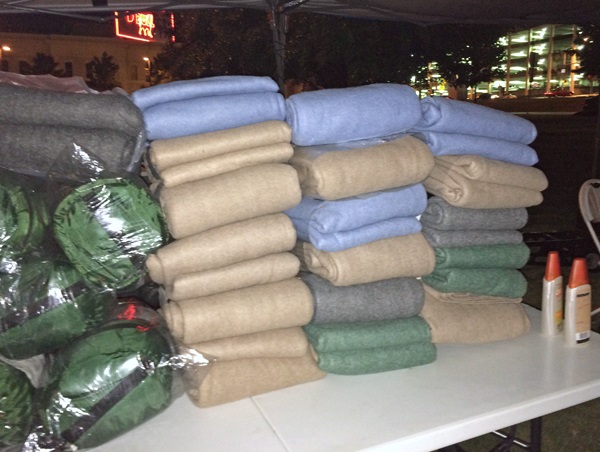 I noticed that I got a box, a pillow and a package of a bottle of water and a granola bar, but others also got a sleeping bag and a blanket. Huh? Maybe it was “let’s make the elected official suffer” night? Nope. It seemed that people who had raised lots of money got more amenities.

Guess that’s a new kind of privilege. I was bummed – disappointed in myself for not raising more money and wondering how I missed that on the website. And, perhaps, thinking that it was just perfect – that even the homeless have different levels of privilege. I knew it was probably going to rain again, and I was prepared to get wet. All I brought with me was what I was wearing – jeans, t-shirt, rain poncho/jacket, hat (for bed hair), my phone (for pictures) and my glasses.

At first, I thought I would set my box up like a square, but I looked around and got some hints from others that setting it up like that might be problematic. I saw a box behind mine that was collapsing upon itself while soaking up the rain, so it was teepee mode for me. 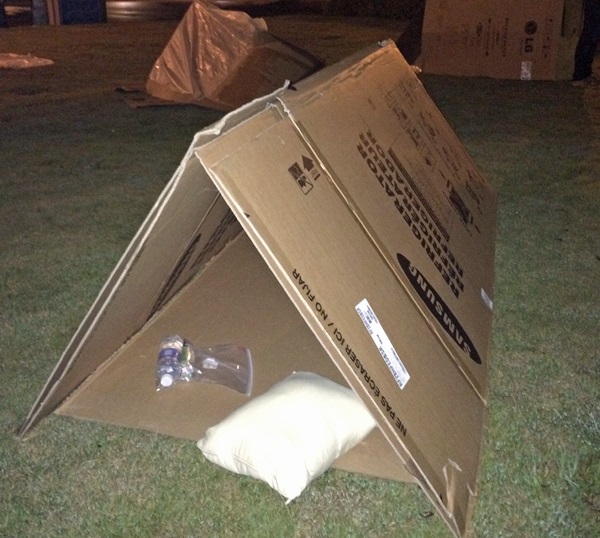 I crawled into my dark, damp and sweaty hovel. With the humidity at almost 100% the temperature still almost at 80 degrees, I was praying for a breeze.

Then, out of the steamy blue, one of the United Way folks showed up at my triangle-shaped opening with a sleeping bag and blanket. Apparently, they determined that another one of the participants had raised $500 more than needed, and he “gifted” that extra amount to my donation bucket. So I got the extras! Yahoo!

I crawled out and gave that other participant a huge hug. Collaboration at work! 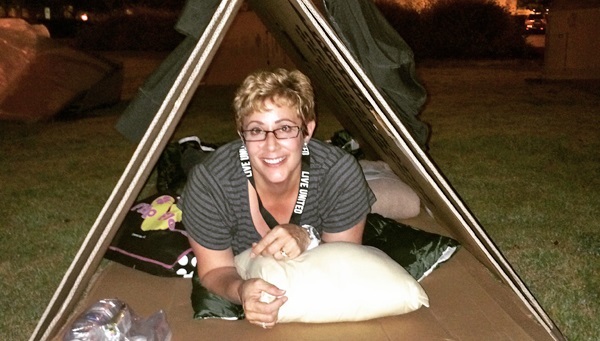 Crawling back into the box, I realized that I could hear everything. The box was acting as an amplifier in a way. The crickets, the cars driving by. Car doors opening and closing. Conversations. People on their way to or from their own homes, their beds maybe.

I was sure bugs were crawling all over me (I DID mention how I hate camping?). It started to freak me out a bit. I tried to calm down, breathing in and out slowly. I felt vulnerable. Nervous. Powerless and susceptible to almost anything, even though I was assured that there was security around. Either way, here I was, sleeping on the ground in Downtown Durham in a box.

Would I even be able to sleep?

Still awake. And then this happens -with the railroad tracks just across the street from me, it was just a matter of time for another train to come by…an incredibly loud and long train. I covered my ears, still hearing it reverberate in my head long after it trailed off.

Wondering if I will ever get to sleep.

Still awake. It’s pretty bright on the lawn of the DPAC with the streetlights, the downtown lights of the buildings and the lights of the tent that was setup for the event.

The light noise is creeping through my pulled-down hat (along with the spiders, I’m sure) as the tires of the slow-moving intermittent cars crawl down the street.

Woke up to some rain hitting my cardboard roof. Looking out, I see some of the folks sleeping without a box, and I feel for them. They didn’t want to sleep inside the box, but they are covered with blankets, so they should be fine.

It’s official, I can’t fall back asleep. I think about how tired and sore I am, wondering what it would feel like to have to wake up and go to work every day after something like this. Some 44% of the homeless are employed. How lucky and blessed am I to be able to sleep in a bed, wake up most days refreshed and then be able to get ready for work? This experience is humbling.

Of course, not all homeless folks are on the streets or sleeping outside like I am, but many are certainly in less-than-ideal situations – even in a shelter of some kind, it’s still tough, and the uncertainty is likely all consuming.

People are stirring. More cars are zipping by. It’s time for me to get up and pack up. Crawling out, I see that some are asleep still – how is that possible?

I’m jealous – my red-eyes are blurry and I feel shorter than normal as I stretch and find it’s actually a beautiful morning. I survey the area – still dawn, but some boxes are leaning and others sturdy. I realize I have two really big spider bites that are itchy.

Will have to check them out when I get home. I have to head home anyway, to take a shower before speaking to a class of first graders about Town Government with the Mayor. 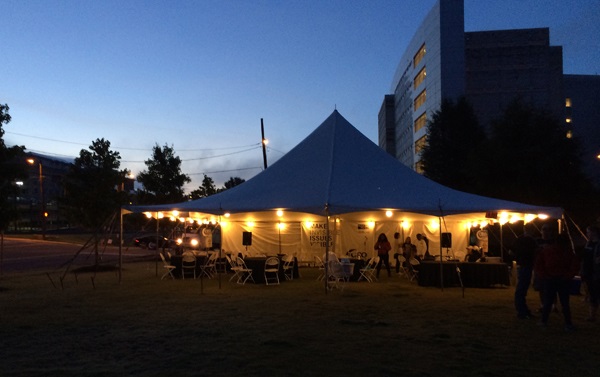 One last interview with Univision about my evening. “What have I learned?” It ain’t easy being homeless. I’m not sure how people do it – the fortitude, stamina and strength to sleep outside in all kinds of weather, it’s certainly not easy or a choice I think anyone would choose to make.

There is no quick answer to fixing homelessness and poverty – clearly, if there were, it would have been found. To address these issues takes public/private partnerships, dedication, commitment and innovative solutions. And, absolutely, a willingness to learn and to do more.

I am truly blessed to have a job, a family and a supportive community. And, most importantly, we need to work to find ways to address these issues. As one of the wise presenters said the evening before (I’ll paraphrase) – “We can add more affordable housing and/or we can pay higher living wages for more people to be able to live in our communities.”

I’m not sure how to address it here in Cary, but I’m willing and able to learn and seek answers to this important set of questions. Finally – it really does take a village. There are so many organizations working, and some of them working together, that we need to find new ways to make a difference for this population of our community. And we need to do it together. 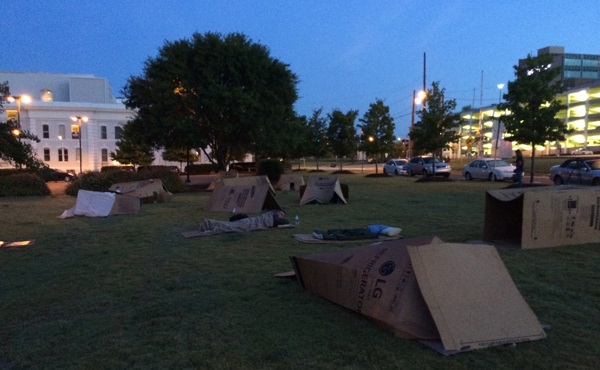 Thanks again to the United Way for all that they do, as well as all the other folks that do this work day in and day out. And thank you for this enlightening experience that I will not soon forget.

From the blog of Lori Bush, At-Large Member of Cary Town Council.