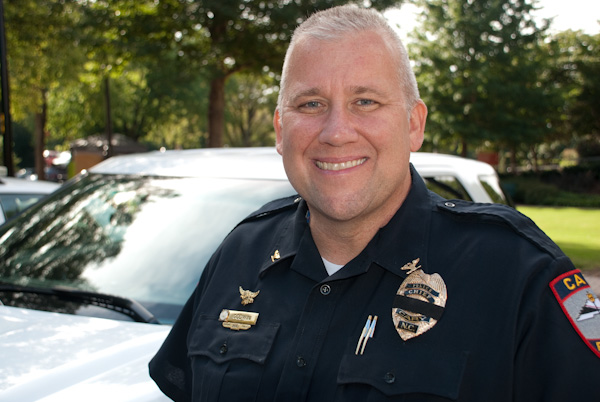 Tony Godwin advanced from Cary’s Deputy Police Chief to Police Chief in August 2015. He first joined the Cary Police Department in 1990 as a patrol officer, but, before that, he interned at the PD in ’89 during his senior year at NC State. He’s been here ever since.

A: Interestingly, the second time I ever rode in a police car was with her. I was an intern and she was a police officer. That was my second or third week here, and I remember it like it was yesterday – as an intern, I had no idea what was in store or how important she would be in my future career. I worked with her years after that on assignments.

Her imprint on who I am and who I became as a police officer is just incredible.

Q: A week ago, WBTV reported that all patrol officers with the Charlotte-Mecklenburg Police Dept. are required to wear body cameras. Could we ever have them in Cary?

There are a number of benefits to body cameras but also some kinks that need to be worked out – mainly, how to store all the data. If you start recording every police officer in action – and, here, there’s close to 200 officers – that’s a lot of data. In Cary, we haven’t yet felt a need for then.

We have a great relationship with our community, and we have vehicle cameras in all the cars that record everything we need at the moment. We’ve used them before on motorcycles and with school resource officers, so we’re not against them, but we’ll wait until someone else works out the kinks before we jump “feet-first” into the body camera world.

Q: What is the Town of Cary’s coolest police car?

Police cars have really run the gamut since I’ve been here – I’ve seen everything from the old, boxy Crown Victorias to the Chargers we have out front. My favorites are the new Ford SUVs. When we get snow and ice, it’s much easier to send officers out to help folks.

The SUVs also give officers more room – there’s not a lot of leg room in Chargers by the time you put control boxes, radars, printers and computer consoles in.

Q: What, if any, issues are going on in Cary right now that require extra attention?

In Cary, we’re very fortunate that we haven’t had to deal with some of the things that have gone on nationally – but it still affects us. It’s in people’s minds, and we have folks here that make comments or react based on the way that things happened in other places.

Although everyone doesn’t agree with everything, we have tremendous support from our community, and I firmly believe that Cary is the best place in the world to be a police officer. We want to make sure the community knows that we’re here to help everyone.

Q: What is the best part of your job?

When people think about being a policeman, they think of the typical high-speed action, shootouts or arresting someone. That’s what we see in TV shows, but, in reality, it’s the things that we think of as little, everyday actions that make an impact.

Q: What are some examples of those everyday things?

I got an email from a woman several months ago. Her husband had passed away at-home, while she was there, and she had called the police. In her email, she asked me to thank the officers who were there that day to make sure everything was in order.

She said they were comforting and thoughtful, even to the point that one of them took her dogs outside to use the bathroom and go for a walk when she was busy. Another officer gave her a hug. Those are little, everyday tasks, but they made all the difference to that woman.

Q: What else is rewarding?

I used to be a drug detective. I worked a case on a man who had become addicted to synthetic heroin and, ultimately, I ordered a search warrant, arrested and charged him. He lost his career because of that. Seven years later, I got a card from him, thanking me for what I did. He said I had saved his life, although he didn’t know it at the time. “You had a job to do,” he said, “and you did it with respect. Years later, I’m able to send you a card because you saved my life.”

Our impact may be as small as walking a dog, or it might be as big as saving somebody’s life, but, as officers, we get to make that impact everyday.

Lori’s Blog: Thinking Out of the Box
Scroll to top