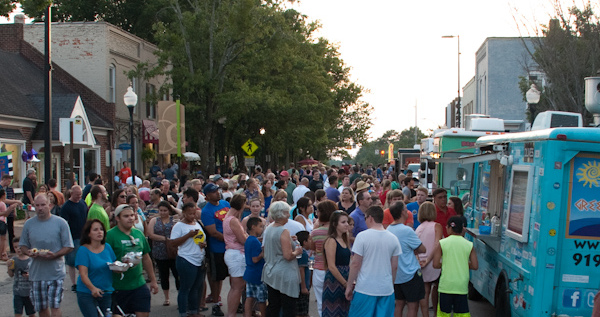 Cary, NC — Cary’s final food truck rally of the year is this Sunday, October 4, 2015. In the spirit of food trucks, I interviewed Jessica McCarthy, the co-owner of Cary’s own The Humble Pig, to find out more about food trucks and what it takes to own one.

Jessica McCarthy opened The Humble Pig in 2012 with her husband, Ross.

“We built the truck from the ground-up,” she told me. With a lot of hard work, the process took just less than a year. “The idea just came to us while we were sitting at the table one night,” she said. “We wanted dessert really badly, but we couldn’t leave the house, and we thought about how awesome it would be if a dessert cart could just pull up.”

Jessica and Ross spent the next few weeks talking about the idea.

“We’ve always loved to cook,” Jessica said. “My husband has always been a backyard barbecue guy – he’s always been a meat guy – and I make southern sides. Our friends always asked us to do the cooking at events, and we’d cook for our church.” 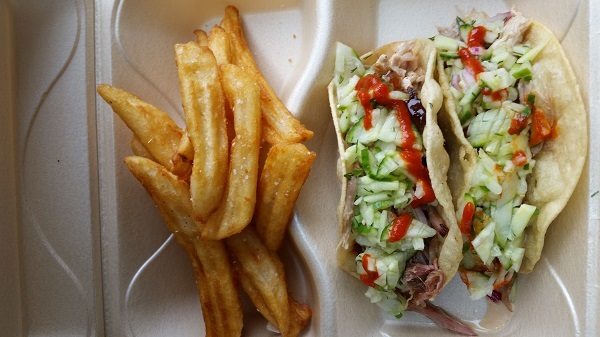 At the time, food trucks were relatively new to the Triangle, and not many people knew about them. “Opening the food truck just kind of happened,” Jessica told me.

Food trucks are officially “a thing” now in Cary. The Town of Cary has held two food trucks rodeos this year – a third will take place this weekend – and Jessica has taken the lead in other citizen-led approaches to the downtown food truck scene in Cary.

So far, she’s organized weekly “Food Truck Tuesdays” in front of Cary Coworking and has made sure The Humble Pig and other trucks are present at the monthly Food & Flea in Ashworth Village. Jessica lives near downtown herself, and it’s obvious she cares for the community. 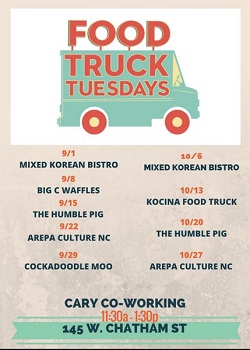 “I’m trying to urbanize Downtown Cary and make it more fun,” Jessica said. “But I want to respectfully introduce food trucks – not overload on them, because that’s not good for the local restaurants.”

“I try to be that middle person – speaking for the food trucks but also making sure that the brick and mortar businesses get the customers they need.”

She even said no to the idea of including food trucks at the downtown Live at Lunch series, which attempts to bring more people downtown to enjoy restaurants like Kababish Cafe, Crosstown Pub, Once in a Blue Moon, Ashworth’s, Academy Street Bistro and more.

Food trucks have been popular in the south for about five years now. As of late, the concept has really taken off. “Three years ago, we called food trucks a trend. Now, I’d call it a staple,” Jessica said.

Jessica and Ross opened The Humble Pig right around the time that food trucks were just starting to become popular in the area. “We were in that first wave, and we’ve watched waves of other food trucks come through,” Jessica said. “When we started, there were about 25-30 trucks within the county. Now, we’re up to 120 trucks, and it’s still growing.”

The food truck community is just that – a community. “A lot of newly-established trucks call us more established ones for advice,” Jessica said. “We all work together.”

Food truck culture, as Jessica calls it, started in California and New York as street food, but you’ll find the same concept all around the world. “In places like Brazil and Colombia, street food is normal,” she said. “The food is at stalls, not trucks, but it’s the same kind of good, gourmet homemade food that food trucks are known for. Here, we’ve just Americanized it.”

You can try The Humble Pig at the Cary’s Chatham Street Chowdown this Sunday, October 4, 2015. You’ll find wine and beer, live entertainment, and more than 20 other food trucks along Chatham Street from noon-4:30 pm. Here’s a list of all the food trucks that will be there. Editor’s Note: The Chatham Chowdown is canceled due to threat of rain. 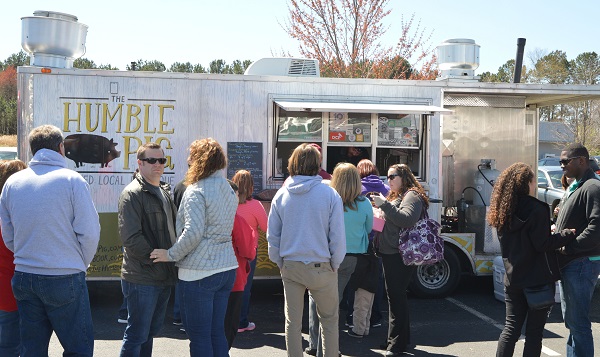