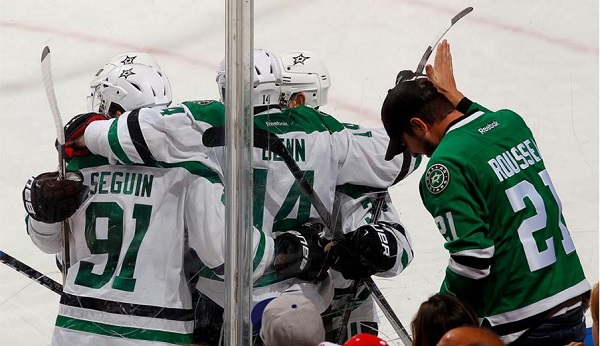 Raleigh, NC — The Carolina Hurricanes’ Friday, November 6, 2015 game against the Dallas Stars could be a twist on Clint Eastwood’s movie, as they played The Good, the Bad and the Ugly. The Canes’ offense had a bad first period, the Canes overall had a good second period and the third period was nothing short of ugly in this 4-1 loss at the PNC Arena.

The Dallas Stars have what is probably the best starting line at this point of the season, so Coach Bill Peters mixed up lines to counter that attack by pairing the Staal brothers with Elias Lindholm. Overall, it was a smart move, as the Canes’ top line forced the Stars to shuffle their top line while Jordan netted the Canes’ lone goal.

After four days off, Peters will, with no doubt, say the offense did not start on time, as the Canes were constantly on their heels most of the first period. The young defense and Eddie Lack actually had a very good period in keeping Dallas from burying a puck in the net.

Noan Hanifin and Ryan Murphy were up to the challenge, as the young pair were frequently on the ice against Jamie Benn, Tyler Seguin and Jason Spezza. Hanifin used every inch of his 6’3” frame in poke-checking the puck off the Stars’ sticks, sometimes as the back defense man.

If you miss the puck with a reach, the opponent usually has a clear entry to the goal all alone, but Hanifin was perfect on every check. Murph used his stick-handling abilities for a nice flip pass to Riley Nash on one of the serious offensive plays the Canes had in the first. The period ended 0-0, and the Canes had to be fortunate but prepared for Peters’ words during intermission.

The Canes’ top line broke the scoreless game just under the four minute mark in the second. EStaal was aggressive to win the puck in the corner after a face-off, sending the puck up to Hainsey at the blue line. Hainsey skated to the middle and sent a hard pass, actually not a shot, off the back boards to EStaal, who was camped out to the right side of the goal.

Staal muscled for the rebound, using his body well to protect the puck, then sent a semi-backhander to Jordan in the dirty area of the crease.

Jordan used his strength to redirect the puck in for the Canes only lead of the game. Six minutes later, Colton Sceviour got a headman pass for a breakaway to the Canes’ goal. Lack made a good save with the deflection going off the post and Sceviour bowling over Lack.

Ales Hemsky picked up the loose change and had one of the easiest goals of his career as he put the puck it in the empty net. Peters wisely used his Coaches Challenge for goalie interference, but the refs ruled it was a good goal. You have to accept the final judgment, but the Caniacs in attendance certainly did not agree.

The third period was nothing but ugly and unlucky for the Canes. If Peters’ expression shows they didn’t start on time in the first period, he may have said they took a nap for a few minutes in the third. The Canes’ forechecking was noticeably less than it was in the second.

On one of the few times in the Stars’ end, Lindholm won a face-off, drawing it back to Hainsey. Hainsey had his head up, and the puck either took a weird bounce or hopped over his stick, but Seguin used his speed to go the full length of the ice with Patrick Sharp on the right and Faulk as the lone defender. Seguin waited until Faulk made a body slide and then fed a perfect pass to Sharp who tipped the puck into the net. Two minutes later, the Stars had it in the Canes’ end and seemed to have shot after shot, while the Canes didn’t take the body not were able to clear.

The result was that Radek Faksa was able to pick up a rebound and score his first NHL goal. The Canes pulled Lack for a sixth attacker, and it back fired in the worst way, as Kris Versteeg passed the puck up to an open spot, but the puck went the length of the ice into the Canes’ net a fraction of a second before the final buzzer.

Keep reading CaryCitizen for more Canes updates from the weekend.