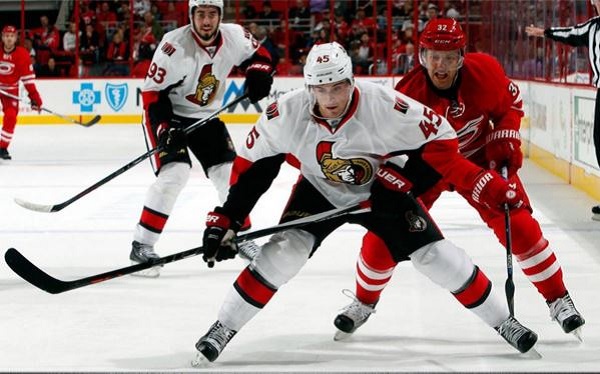 Raleigh, NC — The Carolina Hurricanes won an exciting game in overtime against one of the better teams in the NHL, the Ottawa Senators, on Saturday, November 7, 2015 at the PNC Arena. Even strangers high-fived at the end of this game.

The Senators are a solid team, but the Canes seem to have their number in Raleigh going 11-0-2 in the past 13 games. Coach Bill Peters wanted the Canes to play with a sense of desperation as, when they do, they do play better. Not that it was total desperation, but the Canes’ play at the start of the game was noticeably different and noticeably better than the night before.

Their forechecking and speed were both up a few notches. Cam Ward made a quick pad save off a redirection that was much more difficult than it appeared.

The Canes’ defense picked up the loose puck, clearing the zone and starting what became a solid two minute onslaught of possession and shots in the Senators’ end. At one point, EStaal circled the Sens’ zone twice waiting for the perfect pass.

Nothing materialized other than the Caniacs begging for another shot. I’m not sure if it was the Canes dominating the possession combined with the perceived confidence the Sens expected, but, by the end of the first period, there were some chippy plays between opposing players off the puck. One benefit of attending a game is to watch a certain player for the whole time or to watch the action of the puck. Sometimes it’s a game within a game.

Early in the second, it didn’t take but four seconds for Justin Faulk to add to his NHL leading power play goals for a defense man. Victor Rask easily won the face-off back to Faulk.

Faulk moved from the left point towards the mid-blue line and then left a bomb just as he saw EStaal heading towards the net for traffic. That was all he needed, as the puck went top shelf stick side for a 1-0 Canes lead. About 10 minutes later, the Sens had their first after Faulk sent the puck into the stands for a delay of game penalty.

The Sens scored on a powerplay that had an eerie similarity to a goal scored against the Canes the night before by the skater getting behind the defense then crashing the net.

Four minutes later, the Canes did a poor and unsuccessful job of clearing the puck from their end. The Sens wasted no time in converting the turnover into another first NHL goal by a Canes opponent – this time by Chris Wideman. These memorable first goals by opponents and a nap by the Canes at some point in the game had to stop.

The Canes started the third with a little more edge than they had ended the second with, and more was needed indeed. While the Sens didn’t exactly turtle into a defensive shell, they mostly sent just two forwards deep into the Canes’ end.

As the period went on, it appeared that Coach Rod Brind’Amor noticed the shift in the Sens’ play and started talking to more players as they came back to the bench.

There’s a good chance that he gave instructions for a responsive shift to widen the ice and carry the puck, rather than to dump and chase, into the Sens’ zone. That strategy paid off, as the Canes again regained time of possession. There were plenty of shots but no results.

Late in the game, the desperation Peters wanted appeared with about two minutes to go when Ward was pulled for the extra skater. The Canes must have attempted 10 shots during that time, with the Sens icing the puck twice to escape the pressure. Then, with 10 seconds left, Faulk won the sprint to the icing dot. Peters had five forwards and Faulk on the ice.

JStaal won the face-off with Skinner charging the dot to get the puck. EStaal was charging down the right, but Skinner elected for a backhand shot. Hamburglar made the save but gave up a rebound that resulted in hack and whack by whoever could get a stick on the puck. With 3.3 seconds left, Skinner found the puck and lifted in top shelf to tie the game

Seeing strangers high-fiving everyone, including ushers and having the Caniacs get loud again, was something to see firsthand. The Canes kept their unbeaten streak as JStaal sent a wrister from the left face-off dot with 2:31 gone in the OT on assists by JStaal and Faulk.

More high fives, and the best ones to see, were the ones by folks wearing college hats in red high-fiving ones in blue.

The Canes’ next home game is Thursday, November 12, 2015 against the Minnesota Wild. Great tickets are still available.