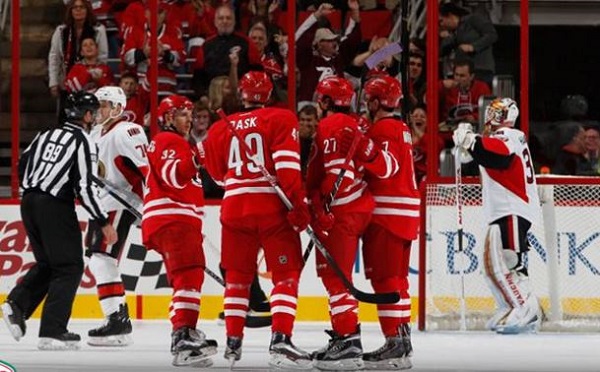 Raleigh, NC — The Carolina Hurricanes had a disappointing weekend, as they lost two home games at the PNC Arena. On Thursday, November 12, 2015, they lost 3-2 to the Minnesota Wild, and on Saturday, November 14, 2015 they lost 2-0 to the Philadelphia Flyers.

Despite a golden opportunity to have a perfect record in overtime, the Hurricanes lost 3-2 for the first time in the exciting three-on-three.

Canes Score 2 in the First

The Hurricanes started the game by dominating everywhere – on the ice and on the score sheet. The only blemish was the late goal by Minnesota that may have been the hidden turning point of the game. Early in the game, the Canes went on the power play after Elias Lindholm made a strong move, but was hooked by Christian Folin, giving the Canes the man-advantage.

For the second time this season, Justin Faulk wasted no time in burying a blast from the point. Victor Rask won the face-off that was picked up by Eric Staal, and Staal pushed the puck up to Faulk who took one stride towards the middle. With EStaal and Lindholm in front of the net, Faulk shot and scored with only four seconds gone in the power play.

Just under four minutes later, the Canes’ fourth line was on the ice and doing what they do best – playing a high energy, grinding style with all their time in the Wild’s zone.

The Canes came out a bit sluggish in the second, and the Wild turned up the heat a few notches. Most of the Canes’ attacks were one shot and done in the Wild’s end, with most either blocked or missing the net. Midway in the period, the Wild had a pretty goal, as Jason Pominville cleared his zone with a pass to Mikael Granlund in the neutral zone.

Granlund went around Ryan Murphy on the left side, down low to Cam Ward’s right, and faked a shot then passed it on to Thomas Vanek, who was four feet away from Noah Hanifin for an easy one-timer past Ward to tie the game.

The Canes had another power play in the third, as well as a chance to start their five-game home stand on a win against a very good western team. The Canes got off shot after shot and kept the puck in the Wild’s end, but they couldn’t get anything past Devan Dubnyk.

Primarily, the Canes went with three lines in the third, trying to do anything and everything to generate scoring chanceds. The Canes were able to get off 14 shots in the period while limiting the Wild to just six. The Canes had a perfect three-for-three record in overtime and were looking to make it an NHL best, four-for-four.

The Canes started with the Staals and Justin Faulk, who dominated the puck possession. The next shift had Jeff Skinner and Victor Rask up-front. Skinner was using his stick-handling skill along the half board and was able to get around Ryan Suter.

Suter hooked Skinny, probably hoping the refs had their whistles in the pockets, as they frequently do on overtime situations, but this was too obvious to let go.

In the new three-on-three OT format, the team on the power play brings on a fourth skater, as the NHL rules for 75 years state that there must be three skaters on the ice at a minimum.

The Canes had numerous shots but just couldn’t get the right angle. With just over a minute left in OT, the Wild had possession. To bring the puck into the Canes’ end, Ryan Suter made what appeared to be an easy pass towards the goal, and Jason Zucker had quicker hands than his defender, so he redirected the puck past Ward for the Canes’ first loss in OT this season.

The Canes did get a point, but the feeling in the locker room was like a loss, as they had the game in their hands early. Their next home game would be in two days against the Flyers.

Canes Lose to Flyers on Saturday

Of all the games in this five-game home stand, the Canes had to have this one circled as a “W,” as the Philadelphia Flyers are about as mixed up as a team in the NHL this season. But the Canes squandered a 2-0 lead only to lose in the three-on-three overtime before one of the better crowds at the PNC Arena this season.

Before the game, the Canes had a recognition ceremony for majority owner Peter Karmanos, Jr. for being inducted into the NHL Hall of Fame as well as a tribute for a show of support and respect for the victims of the terrorist attacks in France.

Flyer Pierre-Eduoard Bellemare was born in Paris and was on the ice as the French national anthem was played. It was very touching seeing him getting emotional as he was mouthing the words of his anthem knowing what tragedies just took place.

The Flyers have always been known as a physical team, and they lived up to that reputation early. They may not be on the scale of the Broad Street Bullies of the 70’s and 80’s, but the Flyers did make an impact early, taking bodies along the boards or even in open ice.

The Canes needed to take a lesson for being equally physical but rarely answered the call. Late in the period, Elias Lindholm got the puck along the half boards in his own end, passing back to Justin Faulk so he could head up ice. Faulk sent a long headman pass to Eric Staal, who turned on his jets as there was just one defender deep in the Flyers’ zone.

Staal held the puck long enough to have Lindy charging on the right wing and then made a sweet cross-ice pass to Lindy’s tape. Lindy carried the puck low and then touched it to the crease with Staal and Jay McClement crashing the net. Somehow, with five bodies inside the blue crease, the puck squirted out to the right of the goal. Lindy was circling the net and rushed to the puck, sending it in for his second goal of the season.

Surprisingly, the game had few penalties. In the second period, Ryan White got caught for a nasty boarding call on Ryan Murphy behind the Canes’ net that put Murph out for the rest of the game. The Canes seemed to put on a firing show, as they pummeled several shots towards the goal early in the power play. After the Canes were quickly passing around at will, Faulk was just inside the blue line in the high slot and then sent a shot over the goal. EStaal was behind the net for the rebound and then threaded a pass to Victor Rask on perimeter of the opposite face-off circle. Rask waited a second and then pinpointed a shot past Steve Mason for a 2-0 Cane lead.

That goal must have awakened the Flyers, as it was all Philly after that. Up to that point, the Flyers only had three shots on Ward, and nearly half the game was gone.

Give credit to the Canes’ forechecking and defense as well as the fact that the Canes play a possession game as well as any team. The tide would turn, though, as the Flyers scored on just their fifth shot. That goal woke up their loyal fans in the crowd.

The Canes seemed to adopt more of a defensive mode in the third, as just two forwards were going deep in the offensive zone. Philly was still playing a physical game.

Perhaps, that had an effect on the Canes, as there were more missed plays and passes than in the first two periods. Very late in the period, the Flyers did a good job of keeping the puck in the Canes’ end and were winning the individual battles. Shayne Gostisbehere had too much space on the right point and took a shot. 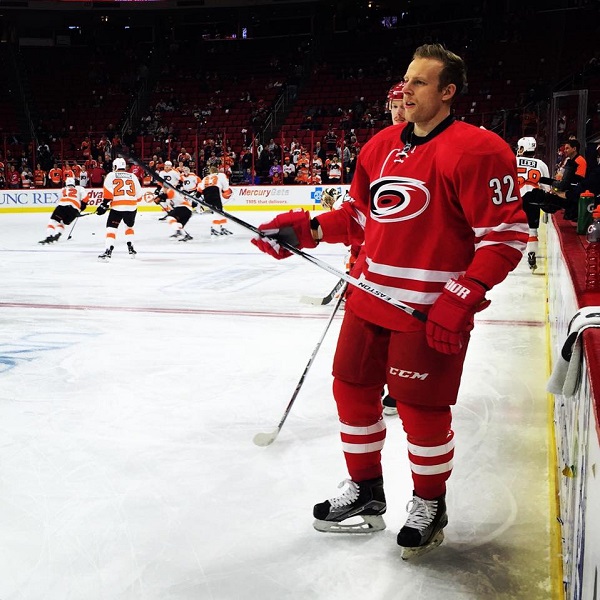 Wayne Simmonds was out-muscling John-Michael Lyles in front of Ward, with the shot bouncing off Simmonds into the net to tie the game. Watching overtime at the arena to see the whole ice surface, how plays are formed and the match-ups is worth the price of admission.

The Canes had the puck early but never got a shot on net. On the second shift, the Canes had two defenders and one forward, which they may have used in the past – I just never noticed. The defensive pairing backfired as Michael Del Zotto made a slap pass to Jakub Voracek who was in perfect position for a redirection into the net at only the 37 second mark of overtime.

The Canes did get a point, but they lost for the second game in a row after a solid 2-0 lead.

The next home game is Monday, November 16, 2015 against Anaheim, and, with luck, former-Cane Bret Hedican will be on press row calling the radio portion for Anaheim. Hedican calls the Canes the best organization he played for and always enjoys returning to Raleigh.