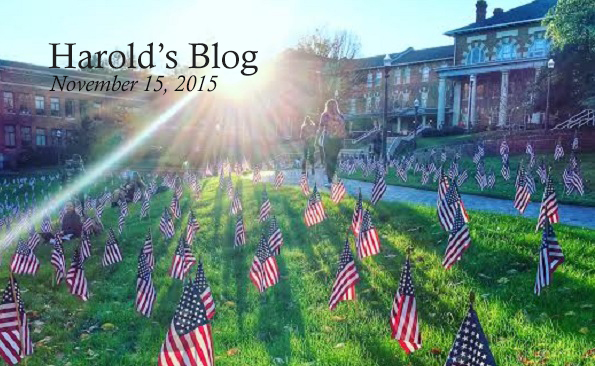 Cary, NC — This week consisted mostly of presentations and the interviewing of town manager candidates.

Monday, I talked with the interim town manager about several issues during our weekly one-on-one meeting. Topics included the sewer spill in Lochmere, getting information to the council-elect member, transportation development fee credits, noise complaints about Kellogg and the upcoming rezoning for the new library.

Wednesday, I had the privilege to join council member Bush in a visit to NC State. We spoke to the Media and Politics class, or COM498.

Some of their questions included:

We had a great time answering the questions and discussing issues related to communications and politics. The class seemed engaged and interested and even gave us applause in the end.

And as we were headed back to the car from speaking at NC State, we couldn’t help notice the beautiful display of flags honoring all our Veterans. God bless each and every one of them for putting their lives on the line so that we can remain a free people.

Thursday I met with a group of seniors from Prestonwood to talk about current issues going on in the town and in their area of town, which is district 2. Here are some of the updates I provided:

Chart of Other Construction Projects

I also told them about these other projects. 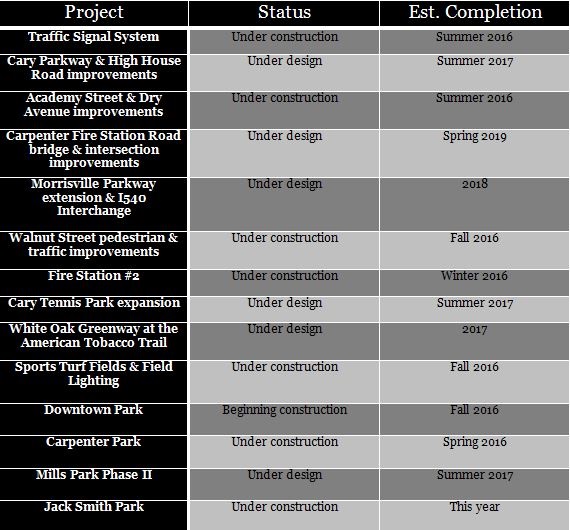 This group was very gracious and kind, and I thoroughly enjoyed my visit. We are already scheduling my visit for next year around this time.

Friday, we began the interviewing process of the six candidates for town manager.

This decision will be one of the biggest decisions the council will make during our time in office. The implications for the staff and town are huge. Friday’s process began at 4:30 pm and ended a little before 9 pm. Two of the candidates were reviewed during this time.

Saturday, we reviewed the remaining four candidates starting at 9:15 am and ending at 6:00 pm with an hour and a half for lunch. One interesting characteristic of multiple candidates was that they hadn’t interviewed for more than a decade. Many of them also said Cary was a premiere community with a well-known reputation. I am not allowed to say much else since our discussions were in closed session, and this is an ongoing process.

Emails from staff this week included the construction and activity report. Items of note included:

See all approved plans for 2015 and all plans currently under review.

Next week will be a very busy week for me as we try to cram everything in before the Thanksgiving holiday week. Activities include:

Well, that is all for this week. My next post will be on Sunday, November 22nd. Although I have Facebook and Twitter accounts those are not the best means of communications with me. Please send all Town of Cary questions or comments to Harold.Weinbrecht@townofcary.org and email personal comments to augustanat@mindspring.com.

From the blog of Cary Mayor Harold Weinbrecht. Flags at NC State photo by Lori Bush.