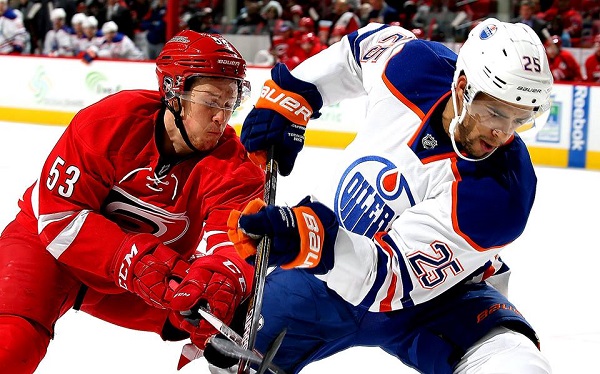 Raleigh, NC — The Carolina Hurricanes won a decisive, come-from-behind game over the Edmonton Oilers 4-1 on the night before Thanksgiving at the PNC Arena.

It was the Oilers the Canes played against and defeated for the Stanley Cup 10 seasons ago, and, with the young talent both teams have, we may be seeing the same match-up within a few years. It can’t go unmentioned – the Oilers were without the highly-talented rookie Connor McDavid, but their team was still stacked with an abundance of highly skilled, young forwards.

The game started out as billed – the Oilers a run and shoot, offensive team and the Canes better defensively. Both teams appeared tentative early on, with the Oilers slightly having the shot advantage. Just over the seven minute mark, Leon Draisaitl got around Justin Faulk outside the face-off circle with a clear entry to the net. Draisaitl is having a good season, and Faulk knows he has a lethal shot, so he improvised, tackling Draisaitl.

The ref threw the flag for 15 yards and a two-minute penalty. The Oilers scored on the powerplay as the puck deflected off Benoit Pouliot for the Oilers’ only lead of the game. The game continued to be exciting with both teams skating well and getting off quality shots with both Cam Ward and Anders Nilsson making solid saves with few rebounds.

Very late in the period, the Canes were pressing hard in the Oilers’ end with a broken line of the Staal brothers and Andrej Nestrasil. This line was like an all-beef patty, as they were winning the puck on shear strength. EStaal’s hard work paid off as he dug for the puck behind the net. Nestrasil joined in the mix and was able scoot the puck to JStaal right behind the net.

JStaal took the puck wide around the net, and, with brother Eric crashing the net, sent a hard pass along the ice that bounced off a defender’s skate and off the goalie’s skate into the net to tie the game with 15 seconds left. With that goal, the momentum shifted to all Canes.

While the Canes had a good first period, they turned up the heat in the second. The forechecking got better, finishing checks were leaving an impression to both the opposing player and the crowd, and the Canes seemed to have a step on the Oilers, which is a very fast team.

Midway in the period, John-Michael Liles shut down the Oilers at his blue line.

EStaal picked up the puck and quickly passed up to Elias Lindholm. Lindy went up the left side with Brett Pesce racing on the right for a 2-on-1 breakaway.

From just inside the face-off circle, Lindy looked right then sent a hard, precise shot five hole to put the Canes up 2-1. Lindy has to like the Oilers, as his last hat trick was against them last year.

In the 17th minute, the Canes had the puck in the Oilers’ end, making quick passes and getting everyone involved. With Jeff Skinner camped on the right side of the crease, Faulk made a slap pass from the right point that actually hit a defender’s stick then bounced off Skinny’s skate into the net for a 3-1 Cane lead. The Oilers hit the post three times in the second, which you could just imagine hearing Ward in the locker room “saw them all the way, knew they were wide.”

The Canes sensed blood as they pummeled Nilsson’s with six shots either on net.

The Canes didn’t exactly go onto a defensive shell in the third, it was more that the Oilers came out gunning. The Oilers were now skating stride-for-stride with the Canes, and the game continued to be a fun one to watch.

Just focusing on one of the highly skilled Oiler forwards during his shift was entertaining.

Their movement off the puck to get into open space make this a team to be reckoned with in a couple of years. The Oilers pulled their goalie with just over a minute to play and had their top line out trying to close the gap. Ward made a save, and JStaal picked up the rebound and passed it over to Faulk, who cleared the zone passing to Nestrasil in the neutral zone.

Nestrasil shot just as he went over the red line, and the puck went into the net on the fly to close out the game for the final score of 4-1. The Caniacs attending saw a very entertaining game, one that may have brought back memories of the 2006 Cup finals but certainly one that could be the forerunner of a future Cup final.