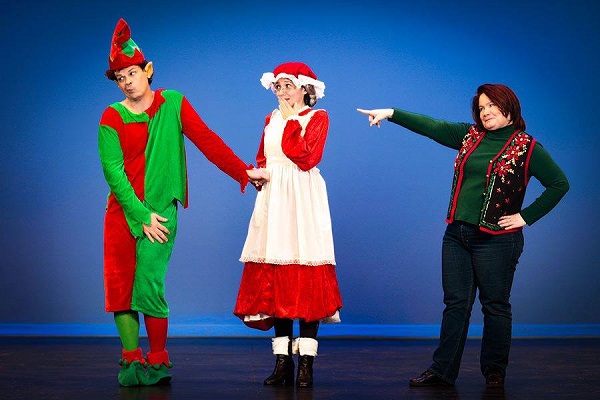 Cary, NC — The Cary Players will present their holiday production, Dashing Through The Snow, at the Cary Arts Center starting this Thursday, December 3, 2015.

Dashing Through The Snow

The Cary Players, Cary’s community theater company, calls this Jones Hope Wooten production a “side-splitting, southern-fried comedy.” Dashing Through The Snow will be presented December 3-7, 2015, on the main stage at the Cary Arts Center.

The play is written by the comedy team Jessie Jones, Nicholas Hope and Jamie Wooten, who have also crafted other popular works such as The Dixie Swim Club and Dearly Departed. Dashing Through The Snow is a collection of four vignettes that introduce audiences to a colorful collection of unusual guests who rendezvous at the Snowflake B&B in Tinsel, Texas.

“It’s an over-the-top comedy, but not a farce,” says director Matt Schedler.

“There are some witty and wonderful characters and a couple heart-warming messages that help capture the spirit of the holidays.”

The talented ensemble will be festooned in festive attire by veteran costume designer LeGrande Smith and some big-southern-hair by Kat Karnofsky. The elaborate set has been designed by Brad Sizemore and constructed by Bob Grannan and Ian Robson. Lighting design by Michael Lefler and sound design by Bob Kulow will provide the final frosting to the production.

The slightly irreverent humor will be best suited for teens and adults, but all ages are welcome.

Audience members are encouraged to wear Christmas sweaters to shows to compete in an “Ugly Sweater Contest” each night for a chance to win tickets to The Wizard of Oz.

Dashing Through The Snow by the Cary Players
at the Cary Arts Center, 101 Dry Avenue

Tickets are $20.00 for adults and $18.00 for students and seniors. You can buy tickets at the door, order them online through etix, or visit the box office at The Cary Theater.

Arts Access will provide audio description for the blind or visually impaired on Sunday, December 6, 2015 during the 3 pm performance.