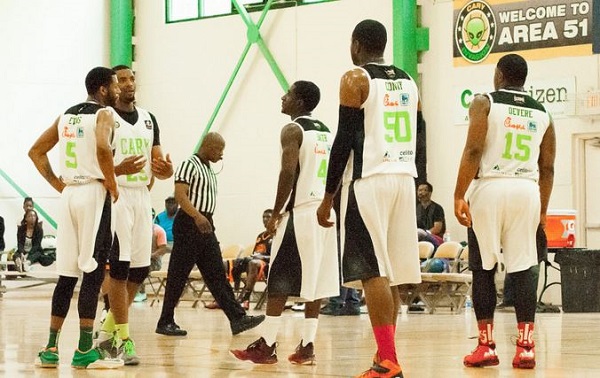 Cary, NC — Before the Cary Invasion took a break for Thanksgiving, they played a home game against the Lumberton Showstoppers in the Herb Young Community Center.

On November 25, 2015, the Cary Invasion beat the Lumberton Showstoppers 112-107 at the Herbert C. Young Community Center in Downtown Cary.

The score does not indicate the difficulty Cary had in winning this rematch against Lumberton, who arrived under-manned but certainly not under-gunned. From the game’s tip-off to the last buzzer, predictably, Lumberton was about the three-point shot – making 11 out of 37 put-ups – to equalize the points expected from Cary’s penetrating guards. And it nearly worked.

The score never showed more than an eight-point spread. And, although Cary maintained the lead at the end of each quarter, they never could make the Showstoppers go away.

Both Teams Were Missing Players

With both teams a couple players down because of the holiday, both still demonstrated a more evenly balanced dispersal of points among those remaining.

In this game, bench points mattered.

For Cary, Cory Evans was the game’s “high points man” with 25. He was followed by Rodney Callwood with 18 (eight of them from the line), and power forwards Anton Currie and Mike Devere each added 12. Point guard Mike Smith and forwards James Rhoads and Taylor Hukill all donated another 10-points to the cause. Additionally, the Showstopper’s Hughes and the Invasion’s Evans were each able to snatch seven defensive rebounds to help their teammates.

The next Cary Invasion home game will be on December 19, 2015 against Auburn.

Before that, the team will have the next two weeks off before they head to Concord for a TRBL and PBL scheduled match-up against the Charlotte Elite (0-2). Next up for Lumberton (0-3) will be a trip to Wilmington (2-0) on December 6, 2015 to tangle with the SeaDawgs.

Theater: Dashing Through The Snow Starts Dec. 3
Scroll to top