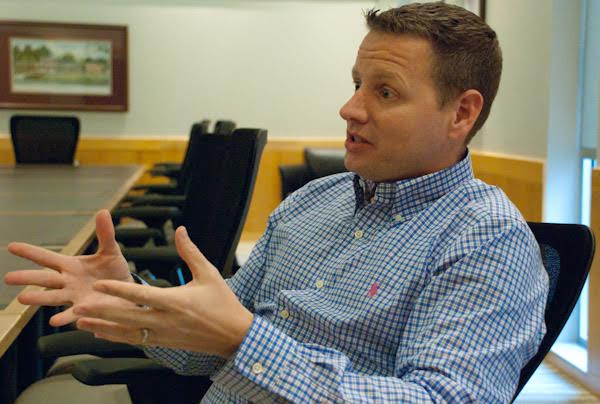 Cary, NC — I sat down with Chuck Norman, the owner of S&A Communications and Cary Magazine, to talk about Cary and what he’s doing right now at the Chamber of Commerce.

I met Chuck at the Cary Chamber of Commerce to learn more about his past and present accomplishments and to get his opinion on business development in Cary.

Chuck Norman moved to the Triangle in 1992 to attend NC State University and, through both coincidental experiences and his drive to succeed, quickly become a leader for business development and public relations work in Cary at a young age.

Chuck first came to the Cary Chamber of Commerce while he was still in college, and he still works there today in his new role as Chairman of the Board.

Chuck is, most definitely, a “Cary guy,” although he doesn’t actually live in Cary, he told me. “Sometimes, as the Chamber Chair, it’s good that I live in Raleigh,” he laughed. “I get to approach a lot of issues unbiased.” Even though Chuck doesn’t live here, he has a huge passion for Cary. “I’ve done so much to help advance Cary that I can’t help but love it,” he said.

“Owning Cary Magazine is a passion, too, because, in our stories, we write about and focus on people from here. I don’t think enough people do that. ”

Chuck and I talked about the path he took to get where he is today, discussed Cary’s growth and reflected on what makes our town such a great place to live.

Q: How did you enter the PR world that led you to S&A and Cary Magazine?

Originally, I went to NC State for Electrical Engineering. During my junior year, I took a class in Communications to round out my skill set, because most analytical people have a very difficult time having a professional conversation.

I wanted to make sure that I was very well-rounded. I took a class with a guy who was running a PR agency here in town, and, when I was done with his class, he said, “You’d be really great for this industry.” I ended up changing my major to Public Relations.

Q: I heard that you worked at the Cary Chamber of Commerce right out of college.

Q: And you transitioned straight into working there?

After I graduated, I lived in Mexico for one summer. When I came back in September, a lot had happened at the Chamber, and a position had opened up. My fraternity brother left to work at the Raleigh Chamber, and I took over his job and did that for seven years.

Q: What was the Cary Chamber of Commerce like back then?

A lot happened at the Chamber during those key years of the mid 90’s to the 2000’s, and I was fortunate to play a big role in a lot of it. I helped build the Chamber’s first website and helped launch the Leadership Cary program and the economic development trip we take each year.

During my sixth year there, I graduated from the Chamber Institute, which is a certification program you take to lead a Chamber of Commerce. I knew I needed to do something else, and I wanted to develop my skill set to be the best that I could be.

Then, one day, a gentleman came into the Chamber to tell me about his business, which, at the time, was called Smith & Associates. I was so dead set on the path of becoming a chamber executive that I didn’t even realize he wanted to hire me. He was looking to grow the PR side of his business and was impressed at all I’d done at the Cary Chamber of Commerce over the years.

Q: And that’s how you got started at S&A?

Yes, it took him six months, but he finally convinced me to come work for him. In January of 2003, I left the Chamber and became an account manager at S&A.

I was the ninth person hired, and I was specifically brought on-board because of my connections in Cary and what I’d done to help the Chamber grow. Over the first five years, S&A went from nine employees to 47. We started Cary Magazine in 2004, the year after I got there.

Q: How have you seen Cary change in your 20 years here?

Cary was about a third of the size it is now when I started working here. We have a great mix of people now. It feels more like a melting pot than it ever has before.

Q: From a business standpoint, what are we doing well in Cary?

Cary has come a long way. I think a lot of that is our commitment to infrastructure and growth and our commitment to keeping our taxes low and having a variety of people represent us. Our government is never just all Republicans or all Democrats – we have a good mix of people of all mindsets. I think we’re doing a good job trying to represent the people in the best way we can.

Q: On the other end, what’s an issue Cary is dealing with right now?

We’re running out of space in Cary, so I think considering our options for redevelopment and infill is one of the biggest things facing Cary. There’s no room left in Cary left to build another MetLife Campus, for example, so we have to start thinking “up.”

Q: You were just elected to Chairman of the Board for the Cary Chamber of Commerce in September. How has that added to your responsibilities?

I lead board meetings, economic development events and most of our public events. This year, I’m focusing on getting behind a statewide initiative to bring jobs to North Carolina.

So many people moving here that we’re not creating enough jobs to keep up with the growth, and this will help facilitate that.

Q: What’s one of your fondest memories in Cary?

Have you seen the bronze statue of a train conductor standing outside of the Cary Depot? That’s Wythe Quarles. When I first started working in Cary, I’d sit at the Chamber each morning and spend the first 15 minutes of my day listening to him tell stories about Cary while he sat and had his coffee. He only lived a couple of years after that, but knowing him was amazing.