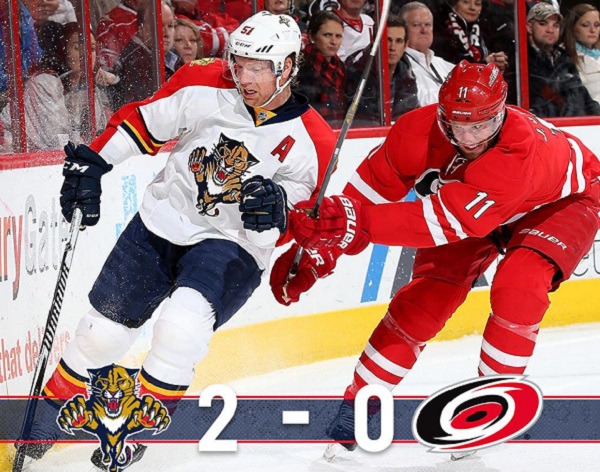 Raleigh, NC — The Carolina Hurricanes lost 2-0 to the Florida Panthers on Friday, December 18, 2015 during a lackluster game at the PNC Arena.

The scoring touch the Canes had throughout their recent road trip was lost in this game.

After scoring 23 goals in the past five games, including a franchise best four games in a row with five or more goals, the Canes couldn’t put one past the Panthers’ Roberto Luongo, one of the teams’ two ageless wonders. It’s not that Luongo had many challenges, but, when the Canes were a threat, Luongo and the posts were up to the challenges.

Both teams play a possession style of game that can lull you to sleep (which allows you to watch more eye-opening play off the puck. We all know the other ageless wonder of the Cats, future HOFer Jaromir Jagr, is still scoring goals and making plays, but, off the puck, he is fun to watch.

At 6’3″ and 230 pounds, he plays hockey like a running back in football. He has one of the best stiff arms in either the NHL or NFL and was man-handling anyone close to him. Justin Faulk drew the short straw and seemed to be assigned to Jagr and, overall, did a very effective job stifling Jagr and introducing him to the boards. The first period saw very few shots by either team, with most of the play north side of the face-off circles in either end or in center ice.

The Canes’ best opportunity of the night was off Joakim Nordstrom’s stick. The Canes had a rare pressing opportunity with Luongo making a save directing the puck to his left.

Nordstrom snared the puck, sending a wrister off the near post behind Luongo then off the far post bouncing out for no goal and no official save.

The second period saw the teams starting to get a little chippy with an extra shove after a play and a loving two-handed cross check to the mid-section along with a holiday greeting and a glove wash that results in the inevitable short whack against the shins.

After Jeff Skinner had a nice entry into the Cats’ zone and did a ‘Skin-o-rama’ around his defender, sending a backhander that Luongo buried, Skinny and the defender went to the far corner as the whistle blew. Skinny got the face wash and, it being the week of Christmas, knew the feeling is better to give than to receive and gave a quick whack to the shins. Minor problem – the shins he whacked were lead referee Brad Watson’s. After a few pleasantries, and maybe an apology, all was good.

One Mistake Leads to Cats’ Goal

Early in the third, Eric Staal was trying to get fancy at the Canes’ blue line but lost the puck to Johnathan Huberdeau, who sent the puck to the left point.

Huberdeau went to the far half boards, got a return pass and then sent a cross-ice pass to (my fellow Clarkson University alum) Willie Mitchell. The Canes had a miss coverage on defense, allowing Mitchell to be all alone in the sweet spot of the slot, sending his first of the year high glove side for what turned out to be the game winner.

The Canes tried their best for a comeback to keep their impressive playing streak in tact but just couldn’t get one past Luongo. Cam Ward was pulled with nearly three minutes left, giving the Canes an extra attacker. The Cats put an empty netter in sealing the game with 21 seconds left. The Caniacs had little to cheer about all night regarding the action on the ice – the loudest cheer may have been during a TV timeout for the Craziest Caniac.

The next home game is Monday, December 21, 2015 against the Capitals, who are always a fun team to have in our building. Be there!