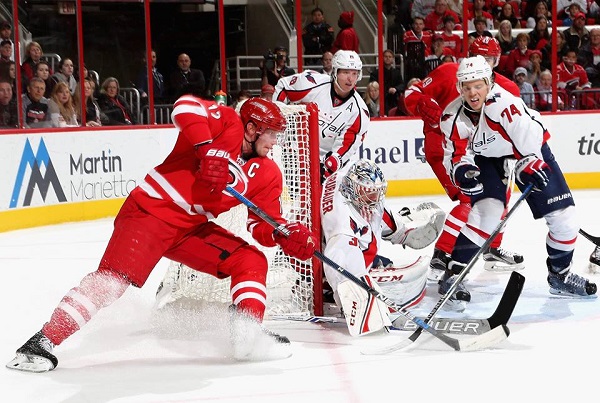 Raleigh, NC — The Washington Capitals are the NHL’s best team at this point in the season, but they barely beat the Canes in a very close and exciting game of 2-1 on Monday, December 21, 2015 at the PNC Arena before a good-sized crowd. The Caps are the stingiest team in allowing goals, and that turned out to be the case as the Canes were only able to muster one goal.

Washington’s Alex Ovechkin plays at one speed – fast – every shift, and, whether it’s his demand or his leading by example, the entire Caps team digs every shift at full speed. They also have the attitude of “take-out whoever is in the way,” as Cam Ward was knocked down twice in the first period while in the crease by the unwelcome visitors.

The few thousand fans in the north lower bowl tried to help the refs out with interference calls, but to no avail. The Canes were getting a decent amount of shots off – many high quality shots – but couldn’t get any past Phillip Grubauer. Late in the first, Andre Burakovsky came down on the left side then took a hard shot that Ward saved with the chest protector but couldn’t control with the rebound. Michael Latte had a step on his Cane defender and followed up the shot and swiped one in just before the rebound hit the ice for a 1-0 Caps lead.

The Canes didn’t have the intensity they had in the first and played tighter defensively. Eric Staal took the Canes’ first penalty, as he got called for holding another all-star, Nicklas Backstrom, which Staal objected to but was a smart penalty to take.

The Canes’ man-down defense looked very good against a very powerful Caps power play unit as they successfully killed off the two minutes with just one shot allowed. After a clean win on a face-off, John Carlson sent a shot from the right point that appeared to bounce off Jason Chimera’s skate right into the goal. Justin Faulk was all over Chimera, short of mugging him, and there was nothing that Ward could have done.

The Canes came out on fire in the third. EStaal carried the puck down along the far boards and spun around, passing up to John-Michael Liles on the point. Liles sent a shot-wide on the near side that bounced off the backboards to the left side of the goal.

Kris Versteeg was in the crease, took a stride to his left, pulled the puck back then twisted his stick between his legs and, with a flick of the wrist, put the puck in the net for one of the prettiest goals of the season that is sure to make the NHL highlights this week.

That goal set the rest of the team and the Caniacs into high gear. The Canes kept the pressure on with quality shot after shot while cutting the Caps down on the rare time in the Canes’ end. With just about a minute and a half left in the game, the Caps were just about to shoot for an empty netter when the whistle blew for too many men on the ice.

The Caniacs were getting into their playoff voices in support of a tying goal. In that 90 seconds, while the Canes didn’t score, they were able to completely control the puck and got off about nine shots. Credit the Caps’ defense on sacrificing the body to block shots and leaving the PNC with a narrow win.

Then, the Caps are back at the PNC Arena on New Year’s Eve at a special time – 6 pm. Every fan in attendance will also get a free wrist band for First Night in Downtown Raleigh. It’s also Family Night, where a family gets in for as low as $99 that includes hot dogs, popcorn, drinks and also four museum/IMAX vouchers for Marbles Kids Museum.

It’s a fantastic deal for families of CaryCitizen!