Raleigh, NC — The Carolina Hurricanes continued their 2015-2016 dominance of the Pittsburgh Penguins with a 3-2 overtime victory on Tuesday, January 12, 2016 at the PNC Arena.

Canes Get 3-2 OT Win Against Penguins

One stat that needs to be reviewed is the attendance, which the Canes announced at just over 13,000. No question, there were at least 2,500 more than the announcement. Give the loyal, local Pens fans credit – they came out to support their old home team as well as to say they love the Cary area and will someday see the light and become Canes fans.

The Penguins came out as the more dominant team, with all four lines skating hard and jumping on the puck whether they were in the corner, along the boards or on a Cane stick.

The Canes were on their heels for the first five minutes and then started to get their heads in the game. The Pens have been on a hot streak lately – Sidney Crosby is playing like the Crosby of old, Evgeni Malkin continues to be a beast, Marc Andre Fleury is off the IR, Phil Kessel is so under-rated and former Cane Matt Cullen has to be the best fourth line center in hockey. 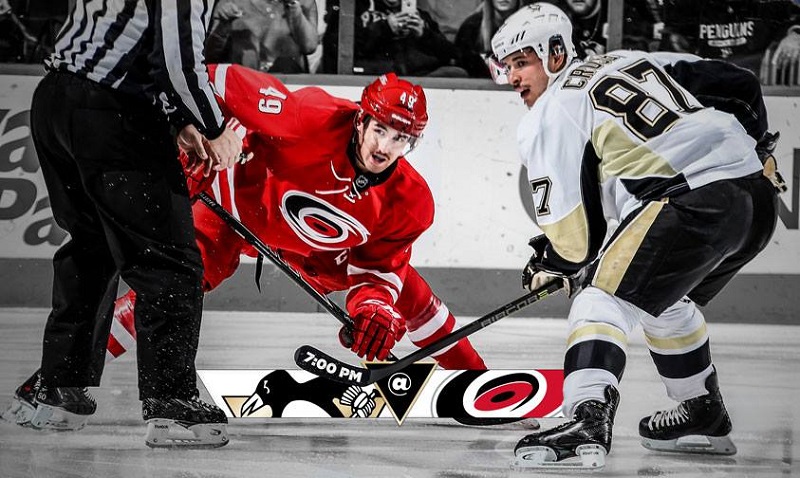 The Pens’ powerplay has been on a hot streak for the past six weeks, and the Canes did what they absolutely did not want to do – they not only into early penalty trouble, but they did so, playing nine seconds down two men. The Canes PK units did a great job killing both parties and doing so with allowing only a few shots.

For the few shots that got through, Cam Ward was solid on saves, rebounds and redirects. On one play that had “goal” written all over it, Kessel, near the right point, made an amazing cross ice pass to Malkin to Ward’s right.

Malkin had that massive body all torqued up for a highlight reel goal, but rookie Jaccob Slavin had a perfectly-timed poke check, which was one of several he and all of the D-men had all night to thwart Malkin’s shot. This appeared to be the eye opener for the rest of the Canes to start stepping up – and step up they did.

The Canes came out in the second like they ended the first – out-skating the Pens and being the more aggressive team to the puck. On their second shift, Elias Lindholm carried the puck into the Pens’ end, dumping and chasing the puck to the end boards. Lindy using his strength and determination, won the battle for the puck and then passed to Kris Versteeg to Fleury’s right, just in front of the face-off circle. Steeger passed to Eric Staal, who was camped out on the opposite side of the crease and who slammed home the goal for a 1-0 Cane lead.

On Staal’s last goal, he was close to being in the same position but finessed the puck into the goal that the goalie quickly pulled out which, only after a video review, was the goal called a goal. Lesson learned – slam that puck into the net.

Just about six minutes later, with the top line back on the ice, Steeger sent a hard slap shot from about 40’ out. The puck hit Crosby’s stick on the way to the net, took a funky bounce off the back boards, landed in-between the two and the nine on Fleury’s back and then rolled into the net for a 2-0 lead for the Canes. The Pens are a good team and came back with a goal less than a minute later. After winning a face-off, Kris Letang scored from the right point off a slap that somehow fooled Ward high glove-side – more proof of the importance of winning face-offs.

The Pens stepped up their game early in the third, and that work paid off. Crosby was behind the Canes’ goal and made a very nice pass to Chris Kunitz, who skated from his blue line through the slot untouched for an easy put-away past Ward to tie the game. The Canes woke up from their nap to get back in the game but were chasing more than they were being chased.

The Pens had a game high of 13 shots in the third period, but, aside from the Kunitz which he was left out to dry, Ward was very strong in net. There’s talk that he’s having an unimpressive year, but don’t be fooled – he’s having a very good year. His rebound control is one of the best in the NHL, and he, like all goalies, has weak areas but, overall, is still quick as a cat.

In OT, Jordan Staal had the puck behind the Canes’ goal line, but Malkin’s attempt to contain Staal resulted in a holding penalty, giving the Canes a four-on-three for a full two minutes. The good news is that the Canes only needed 12 seconds for Jeff Skinner to slam home the game winner off Lindy’s personal best third assist of the night. The Canes are now above NHL .500 for the first time in nearly three years and only three points out of a playoff spot.

The next home game is Friday, January 15, 2016 against the Canucks. Be there!