Raleigh, NC — The Carolina Hurricanes’ longest winning streak since the 2012-13 season ended with a 3-2 overtime loss to the Vancouver Canucks on Friday, January 15, 2016 at the PNC Arena.

It was the second time this month that the Canes lost to the Canucks in OT and also the second time that Bo Horvat scored one in regulation and the game winner. The nine points the Canes earned in five games are the most they’ve had in years, and it’s not just by chance. The Canes are playing some very good hockey.

The start of the game had a slow tempo. Maybe it was because both teams had arrived in Raleigh the night before. The Canucks had a short flight from Washington (where they lost 4-1 in a game they were never in).

The Canes, on the other hand, arrived in the wee hours of Friday morning as they were coming home after a solid team 4-1 win against the playoff-bound St. Louis Blues. The Canucks struck first after a turnover in the neutral zone with Linden Vey coming away with the puck and bringing it in the Canes’ end. Michal Jordan, who was playing for the first time in weeks, skated hard to cover Vey and, after realizing Vey was winding up for a slap shot, went down on the ice to block anything along the ice. Vey’s shot went just over Jordan and fooled Ward by going short side. That was the first first period goal Ward has surrendered since early December, and he certainly wanted it back.

Late in the period, the Canes had their first powerplay, which has been very good in the past month. Their proficiency continued as John-Michael Liles scored after a pass from Jordan Staal to Jaccob Slavin over to Liles who lined up a calculated slap shot.

Canes Had a Chance to Put the Game Away

The Canes started the second with most of the four minutes remaining on a power play after a high stick to Justin Faulk late in the first. The Canes didn’t score on either end of the man advantage, but they did have good puck possession that only garnered three shots. Midway in the period, Horvat scored his first goal of the night. After getting a pass just before the Canes’ blue line, he entered the zone and waited for Slavin to get between him and the goal.

Just as Slavin was in position, Horvat sent the screened shot to Ward’s left for the second short side goal. The NHL is a game of inches, and, coming off the post and giving any sight of the net will result in a goal with most sharpshooters. At this point in the game, the Canes’ puck possession and dominance was starting to gain foothold. 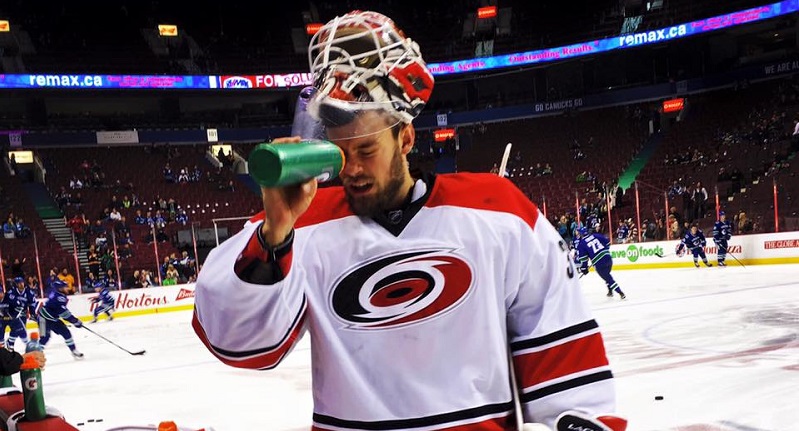 The Canes’ dominance continued in the third with most of the same results – puck possession time was clearly in favor of the Canes with more shots, fantastic results in the faceoff circle and the right line matches.

The only penalties in the game were the two called in the first with both against the Canucks. It’s not that it was a clean game, as there were trips, cross checks, hooks, holding and one high stick to Steeger that was so blatant that he would not back off either ref, letting them know they were getting paid for referring and not being a spectator.

The Canes continued the offensive pressure with 11 more shots in the third. With just over two minutes left, with the Caniacs getting louder by the second, Victor Rask passed the puck low to Andrej Nestrasil, who had a very good game, grabbing it going behind the net. Nester passed to Liles in the face-off circle, slinging a hard pass to traffic in the crease.

Lady luck has been with the Canes the past few games, and she was there again as the puck bounced off a defender’s skate high into the net to tie the game. Late in the 3-on-3 overtime, the Canes were called for holding penalty, but the Canucks held possession and pulled the goalie for an extra skater. Horvat jumped the boards as the extra skater, and, just as he entered the Canes’ zone, was fed a silver platter saucer pass that he slammed past Ward for the game winner.

One fun time during a TV time out was the Kiss Cam centering in on one couple who thoroughly enjoyed the opportunity for the smooch. He picked her up after the kiss and carried her up the stairs, which the Caniacs thoroughly enjoyed.

They missed the end of an exciting game.

The next home game is Friday, January 22, 2016 against The New York Rangers, which always attracts a large crowd.