Cary, NC — The Cary Invasion defeated the Wilmington SeaDawgs 99-94 on Saturday, January 16, 2016 at the Herb Young Community Center in a special game that allowed youth from Cary’s Parks & Rec sports teams to participate.

On Saturday, the Wilmington SeaDawgs trekked up the interstate to the Cary Invasion’s house for the second of three games the teams will play together this season. This was the Invasion’s Cary Parks & Rec Youth Team Night, so the stands were filled with ‘wannabe’ hoop stars and their parents, who were all home team fans.

The game was to be an evenly-matched contest, but the Invasion struck first with a miracle three by rookie guard Raheem Jallife that was followed up closely by a handful of baskets from team members. With Cary jumping out to an early lead and maintaining it, the SeaDawgs had to play catch-up for the remainder of the game. They battled tirelessly, attempting to even the score up, and, with a minute left, it looked like they had done it. But an errant foul with only seconds left combined with some dead-on shots from the line sealed the SeaDawgs’ fate, giving Cary the 99-94 win.

All of Wilmington’s production came from seven players. Double-digit scorers were game high-point shooter Todd McLauren with 28, Levi Humphrey with 23, Addison Spruill with 16 and Marco Spears adding 10. Overall, the team shot 35% from the floor and 48% from the line, handing the SeaDawgs their lowest-scoring performance of the season.

With the Invasion, however, the story was all about its young guards. Although the team’s scoring was more evenly-balanced, it was point guard JJ Barbee (17 points) and newly-activated rookie guards Raheem Jallife (18 points) and Jeff Legree (15 points, 3-3’s) who contributed half of the Invasion’s scoring. Add to that the accuracy of team high-scorer, veteran power forward Rodney Callwood who showed he knew where the basket was with 24 points – 88% of them coming from the floor.

Two other contributing factors to Cary’s win was their increased aggressiveness under the basket – they grabbed 29 defensive rebounds – and, of course, the continued din of the Invasion Nation. It can get very loud and disconcerting in Herb Young if a team’s not used to it.

Members of Cary’s Parks & Rec youth teams (representing all sports) who wore their jerseys were admitted free, and their accompanying parents were given a two-for-one ticket deal. Also, the first 50 youngsters to arrive were given a free alien basketball, suitable for autographing by the Cary Invasion players. 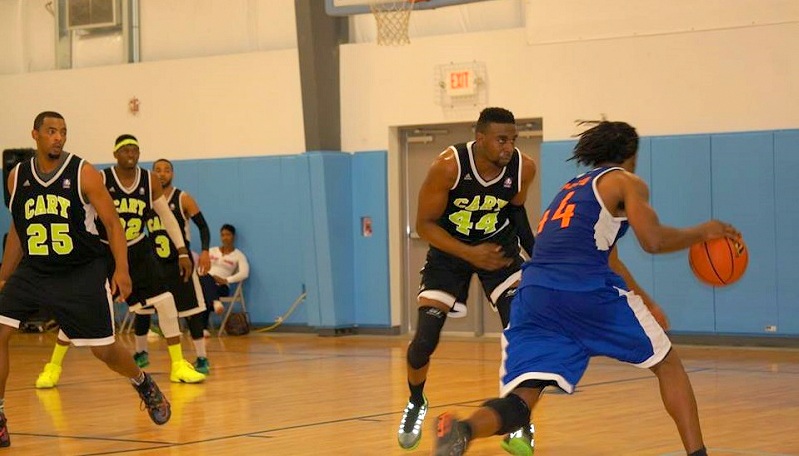 At halftime, “the voice of the Invasion,” Dan Pike, called for all of the Cary Parks & Rec basketball youth team members to join him on the court for a shootout. About 35 youth in six different age groups competed with the best shooter in each group winning the opportunity to wear Invasion colors, sit with the Cary Invasion on their bench and actually play in their upcoming benefit game against the Cary Police Department on February 6, 2016.

This will be the fourth year of the annual contest, and, although the Invasion holds the edge, it’s all in good fun with game proceeds going to Dorcas Ministries to benefit their Outreach Programs. Youth winners who will wear Invasion colors on February 6 are Jozi Lester, Sieria Aker, Isaiah St. Hill, Landon Hunt, Elijah Holland and Nick Fogg.

Next up for the Invasion is their rematch with Auburn’s Pro Elite team on Saturday, January 23, 2016 at home in the Herb Young Community Center. Tipoff is set for 7 pm. After that, Wilmington (8-2) and Cary (7-3) will meet one more time during the regular season on Saturday February 13, 2016 in Cary.

A Day at the Higgins Greenway