Less then 24 hours after they beat the Maple Leafs 1-0 in overtime, the Carolina Hurricanes were back home in Raleigh to take on the New York Rangers. The Canes must have left everything they had on the ice in Toronto, though, as they were never in Friday night’s game and lost 4-1 in front of a sparse crowd due to ice and snow.

The Rangers fans, however, are used to the nasty weather conditions and were out in full force, so I even bummed a ride from Cary resident Dave Michelich (who is a Canes fan unless they’re playing the Rangers).

With Eddie Lack back in goal and coming off his first shut out as a Canes, and with Henrik Lundqvist between the pipes for the Rangers, there was a good chance it would be a low scoring game. It was for the Canes, but not so much for the Rangers. Not sure if the Canes were tired from the game the night before, or possibly tired from pulling their children around in sleds, but the Rangers, who are a very fast team, completely dominated the game in every category.

The Canes got credited with 26 hits, but that was a generous number, and turnovers killed the Canes. The first turnover happened around the 15 minute mark when John-Michael Liles tried to thread a pass through the neutral zone to Victor Rask. With all five Rangers skaters in center ice, the pass was easily picked off by Ryan McDonagh, who entered the Canes’ end and sent a bullet off Lack’s shoulder, bouncing off the post into the goal.

Just under four minutes later, Noah Hanifin hesitated on clearing the puck. Kevin Hayes came from behind Hanifin, stole the puck, and, with poor coverage by the Canes, Keith Yandle skated hard down the slot. With a pass from behind the goal from Oscar Lindberg, he easily put a snap wrister past Lack for a 2-0 lead.

The Canes came out stronger in the second, knowing they had to in order to get back in the game. The Canes’ big line, big as far as size being the determining factor, was on the ice grinding away and fighting hard for the puck. The hard work paid off as Jordan Staal fought for and won the puck behind the Rangers’ goal. 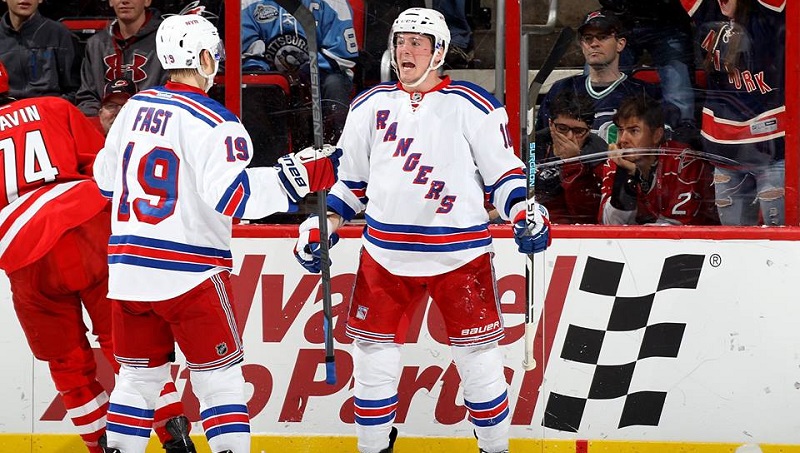 Staal passed over to Anderj Nestrasil, who initially lost the puck, but aggressively skated to the corner to get the puck to send it over to Joakim Nordstrom for a one-timer to close the gap 2-1. Six minutes later, with the puck deep in the Canes’ end, another defensive turnover by the Canes led to another Rangers goal.

Lack was facing enough rubber from normal attacks, making these turnovers more frustrating. Just two minutes later, J.T. Miller didn’t pick pocket Jaccob Slavin – he was guilty of first-degree robbery. The Canes’ zone was cleared of all skaters except Slavin and Miller, as Slavin had control with the intent of clearing. Miller came from behind, lifted Slavin’s stick then went right to the goal completely fooling Lack for a commanding, and what turned out to be the final, score of 4-1.

Canes Never Give Up

The Canes tried to make a game of it in the third, but the Rangers were in a shut down mode, as they only had one shot in the period. Ranger Rick Nash went down hard into the boards, needing help to get off the ice.

After returning from repairs in the locker room, he was back on the ice seven minutes later. On his first shift after the repairs, he blocked a shot in the ankle just above the skate and was in severe agony. The Canes had 12 shots in the third, and one off Jeff Skinner had “goal” written all over it, but King Henrik made an unbelievable stop.

Wow, the Canes are busy! Their next home game is Tuesday, January 26, 2016 against the Blackhawks at 7:30 pm. Before that, be on the lookout for a recap from Sunday night’s game against the Flames.

Guide to Sushi in Cary
Scroll to top