Morrisville, NC — A segment of Morrisville Parkway near Park West Village will be closed for six months starting next week. I met with Benjamin Howell, Transportation Planner for the Town of Morrisville, to find out what area commuters need to know.

Traffic congestion – it’s the biggest issue in Morrisville right now, and it affects residents in Cary and in other municipalities, too. “Morrisville has seen a lot of growth in the past several years, but a lot of the traffic we’re facing isn’t from residents – it’s from all the people passing through on their daily commutes,” Howell explained to me. He’s right – Morrisville is a major intersection point between Cary and RTP and between Durham and Cary. The airport doesn’t help traffic, either.

“We want people to know that we are fully aware of the traffic congestion and the issues,” Howell told me. “We have a lot of large projects coming up that will make a huge difference.” These projects include construction on McCrimmon Parkway, Aviation Parkway, NC-54, Louis Stephens Road and other major paths that people use in their daily commutes. Some of these projects will start this year, and some will start in ten years.

The one project that’s on everyone’s minds right now, however, is the Morrisville Parkway grade separation project that starts next week. Howell told me more about this project’s timeline and construction process and what it means for commuters.

“There’s a lot of citizen concern about the construction starting on Morrisville Parkway,” Howell told me.

That’s because a segment of Morrisville Parkway will be completely closed off for six months, allowing no traffic to pass through between Crabtree Crossing Parkway and Bristol Creek Drive (the road that leads into Park West Village). 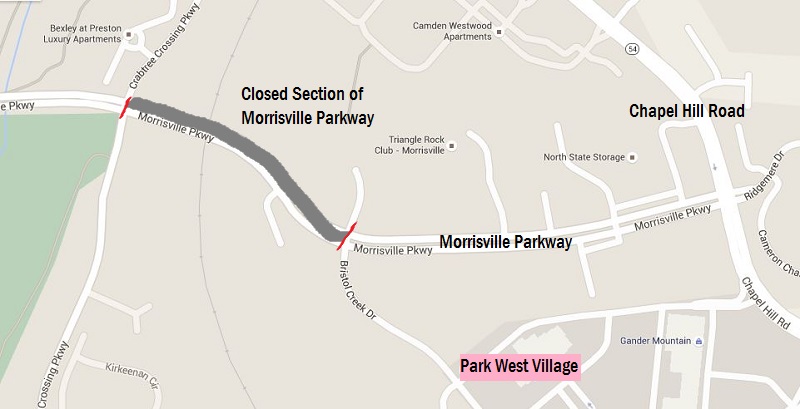 The railroad tracks, which you’ll see running through this segment, will be taken off the road and put on a new bridge. To answer everyone’s questions about the Morrisville Parkway closure, I asked Howell the when, how, what and why.

When – When will the road be closed? As you can see in the map above, a segment of Morrisville Parkway near Park West Village will be completely closed off to through traffic for six months. Businesses on Morrisville Parkway between Bristol Creek Drive and the railroad tracks will be accessible during the entire closure. The closure will start as early as February 8, 2016, and the road is anticipated to open in August 2016. The Morrisville Parkway project is expected to be completed in May 2017. 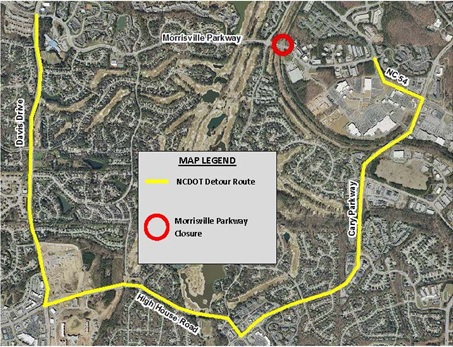 How – How will commuters detour the construction? Cary and Morrisville drivers are concerned, because the detour will take people down Cary Parkway to High House and back over to Davis. “It’s a very long detour route,” Howell said. People are worried about the build-up this will cause on Cary Parkway, especially because the Cary Parkway and High House Road intersection is already known for its congestion. Editor’s note – construction to improve this intersection will start in 2017.

What – What work is being completed? For the past two years, beside the road, workers have been building a new bridge that will go over Morrisville Parkway. This bridge will hold the existing railroad tracks that are currently on Morrisville Parkway.

“During the road closure, they will be removing all the old railroad tracks that used to go across the road, putting all those on the bridge, tying in both ends, then actually cutting Morrisville Parkway down underneath the bridge and reconstructing the road completely between Crabtree Crossing and Bristol Creek,” Howell summarized.

Why – Once the road work is complete, Morrisville Parkway will go completely underneath the railroad tracks, so cars won’t have to cross them at all, and there will be no stopping. During the construction, sidewalks will also be built of both sides of Morrisville Parkway along the segment of road that is closed. “We haven’t ever had sidewalks in that area, and now we’re providing a safe pedestrian route for pedestrians to get from one side of the railroad tracks to the other,” Howell said.

What’s Being Done to Help?

Morrisville and Cary officials and staff are working together to address citizens’ concerns. In his weekly blog, Cary Mayor Harold Weinbrecht explained that, “In advance of the detour, NCDOT has made some minor intersection and traffic signal improvements along the detour route to help minimize the impact.“

Cary’s Traffic Management Center (TMC) staff will be implementing new signal timing changes along the detour route in order to keep traffic flowing as best they can. They expect traffic volumes will be higher along the detour route; therefore, delays will be expected since adjustments to signal timing cannot fully mitigate roadway capacity issues.

Even if we know that town officials and staff are working to make the adjustment run smoothly, concern is still present. During my meeting with Howell, I asked him what he wants the public to know about these road projects, which are often inconvenient. “A lot of people don’t understand why it takes so long to get road improvements completed,” he answered.

With large projects, once you get the funding to build the road, you can’t just go out there and start moving dirt immediately. Engineering and design work can take months to more than a year, and then there’s permitting. You have to see if any historic properties in the area will be affected, if there’s endangered species or special habitat areas…the environmental permitting phase can sometimes take a year or more. And that just gives you the plans and permits for the road – next, you have to go through construction, which can take anywhere from 18 months to three years.

“We ask our citizens for patience,” Howell emphasized. “These projects will cause disruption but will be well worth it in their end results.” CaryCitizen readers should stay tuned for more updates on road construction in Cary and Morrisville.

Story by Jessica Patrick. Detour map by Town of Morrisville.