Cary, NC — This week was one of the busiest weeks I will have this year.

Monday began with calls to council members since this was a week with a regularly scheduled council meeting.

I was able to reach all council members except Robinson.

I asked council members about their concerns and questions on the upcoming meeting agenda. In my individual conversations with council members, comments were made about the Holy Brook rezoning, potential artwork for the future parking deck and the public hearing for the Maynard Comprehensive Plan request.

Later Monday, I met with management, directors, legal, public information and administration to go over the items on the meeting agenda. Our meeting lasted about 20 minutes.

Following the agenda meeting, I joined the Mayor Pro-Tem in a meeting with the Interim Town Manager and Assistant Town Managers. We discussed several items, including the Jones House and Belle restaurant and snow/ice removal.

My last event on Monday was the award ceremony and reception for the Lazy Daze grants.

After my remarks, I joined council members Yerha, Smith and George in handing out grants to various organizations. Everyone then adjourned into the lobby for refreshments.

Tuesday, the council held a work session on the Eastern Gateway.

This is a section of town bounded to the north by Chapel Hill Road, to the east by I-40, to the south by Walnut Street and to the west by Maynard Road. The Eastern Gateway plan is part of the Imagine Cary Comprehensive plan. Council’s discussion focused on the state site, which goes from the WakeMed soccer facility to Cary Towne Boulevard.

Council also discussed the impacts of that site to surround properties like the mall.

Here are some points made at the work session:

Staff will bring back additional information about the Eastern Gateway in a little over a month.

Wednesday morning, I gave the State of the Town address to about 150 people in attendance at Prestonwood Country Club as part of the Cary Chamber’s monthly breakfast series. I spoke from 30 slides that I had created from the official address, which can be viewed on YouTube. My talk lasted about 30 minutes, was less formal than the official version and included additional information and side notes. There were just a handful of questions afterwards.

I began collecting data for the State of the Town address about two months ago. The text was written between the Christmas and New Year’s holiday, fact-checked the first couple of weeks in January and taped for YouTube last week.

This was my first live presentation. My next live presentation will be at the Triangle Community Coalition in a couple of weeks and then at Glenaire after that. Each will have different versions and time lengths to match the audience and time available. All will be a subset of the official State of the Town Address and include updates.

Another discussion item was the appropriation of funds for the parking deck. Council decided not to add a sprinkler system but did approve public art. The reasons mentioned in support of the art were that the parking structure was across from the arts center and because it was in an area that is the focal point of art.

The council also had a good discussion on the proposed storage unit behind the Mayfair Plaza that is anchored by Carolina Pottery and Food Lion. This will go to the Planning and Zoning board for their recommendation and return to council for a vote at a later location.

Thursday, I traveled to Greensboro for the council-staff annual working retreat.

The focus of this retreat was infill and redevelopment. 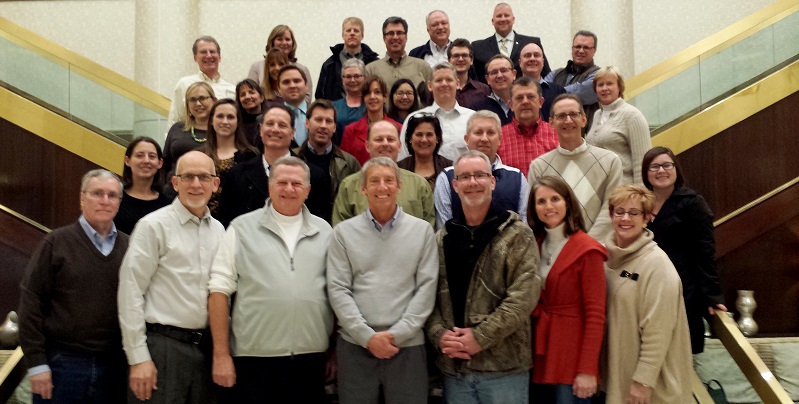 We started by hearing about what is going on around us. Lee Worsley from the Triangle J Council of Governments made a presentation that included the following interesting points:

Next, we had a presentation from Bob Geolas, who is the President and CEO of the RTP Foundation.

Some of the points he made included:

Next, staff presented information about infill and redevelopment. Some of the information provided included:

The council then took a walking tour of downtown Greensboro. Downtown developer Roy Carroll hosted us in his home, which was the entire 17th floor of the old Wachovia building, which he redeveloped. From the view at the top of the building, we could see several redevelopment projects which were discussed. Thanks to Mr. Carroll for opening his luxurious home to us.

The final presentation of the day was from the Planning Director of Greensboro. She presented examples of how painful infill can be with residents. She pointed out that infill can be more valuable to developers since services (water, sewer, fire protection and police protection) are already in place.

Friday, the council and staff took a guided bus tour of several infill and redevelopment projects in Greensboro. We heard about the difficulties in each project and the public private participation needed to make them happen. It is interesting that, in Greensboro, there were many foundations participating in projects. We need that in Cary!

Lunch was in the Greensboro coliseum with the Greensboro mayor, council and staff. I was not seated with a council member or the mayor, so, unfortunately, I didn’t have the opportunity for any in-depth conversations. However, based on what I was told and on what I observed, they are dealing with several difficult issues including racial issues.

The topic that was apparently discussed at other tables was whether or not to require police body cameras. I was able to speak with several staff members including a brief conversation with the city manager. The Greensboro staff and the City of Greensboro were great hosts throughout our visit, and I made sure to point that out in my remarks to the group.

After our visit to the coliseum, we returned to our meeting room to continue discussion on infill and redevelopment. The council spent a significant amount of time in an exercise that separated the council members into groups with various members of staff. Our exercise was to plan the redevelopment of an older area of town.

For the exercise, the Mayfair plaza that is anchored by Carolina Pottery was chosen. At the end of the planning exercise, the council presented their plans to the group. It was interesting that most council members, including the newest council member, designed the site in pretty much the same way. Expanding the park behind Carolina Pottery, protecting existing neighborhoods, having smooth transitions between density and uses, having significant green space, nice features, structured parking and a mix of uses dominated the plans. The main differences between the plans were the density. The exercise showed staff how the council thinks about redevelopment, the density they preferred and the details that were important.

Our day concluded with staff and council summarizing all we had discussed on infill and redevelopment.

This is just the beginning of our continuous discussions on these topics. All staff returned home, and the council remained with its direct reports (town manager, town attorney and town clerk). We spent half the day talking about what to expect from each other and how we should communicate with each other. We ironed out details on a quick efficient way to contact and communicate with each other. We also discussed various protocols needed in our work together. The retreat was successful and something we can build off of. Thanks to all the staff for the hours of preparation in making this happen.

Next week will be much slower for me and I look forward to having dinner with my wife for a change. The only things on the calendar are a few meetings and a quasi-judicial hearing.

Well, that is all for this week. My next post will be on Sunday, February 7th. Although I have Facebook and Twitter accounts those are not the best means of communications with me. Please send all Town of Cary questions or comments to Harold.Weinbrecht@townofcary.org and email personal comments to augustanat@mindspring.com.