Cary, NC — I visited Shuckin’ Shack Oyster Bar, a brand new Cary restaurant, to meet the owner. While I was there, I ended up getting a crash-course in oysters and got to try crab balls, one of the restaurant’s most popular dishes.

“I graduated from UNCW, so we’d go back to the Wilmington area on the weekends, and we just fell in love with the restaurant,” he told me. “It’s about 900 square feet, and the place stays packed out all year long – not just in tourist season. The food there is good and simple and the people are friendly – it’s a laid-back place where you want to spend time.”

Brad and Meredith got to know the owners and learned that they wanted to expand Shuckin’ Shack outside of the Wilmington area. “We loved this place so much that we’d kick ourselves if someone else opened one around the corner from our house,” Brad told me. “So we signed the lease here in January 2015, and now, one year later, we’re open.”

The new Shuckin’ Shack sits in the space that, years ago, held a Caribou Coffee.

“We kept a few of the original details, like the unique-looking sockets in the ceiling and some of the flooring,” Brad told me. Other than that, the space has a completely different look. The cozy restaurant is bright and family-friendly – it’s a place for a quick lunch or a family dinner as well as a spot to hang out at the bar with friends and watch a football game.

Brad decorated Shuckin’ Shack with meaningful memorabilia that represents the history of Cary and the restaurant. “To pay tribute to the original Shuckin’ Shack, we built the foot rails on the bar from wood we salvaged from the boardwalk at Carolina Beach,” he told me. “The Town helped me pick out some old pictures of Cary to display on the bar and on the walls.”

What’s on the Menu?

As soon as I sat down at the bar for our interview, Brad placed a plate of crab balls – one of his most popular appetizers – in front of me. The crab balls are made from the restaurant’s crab cakes, which are rolled up with breading, deep-fried and served with a mayonnaise and hot sauce-based dip that Brad whips up in the kitchen every morning. 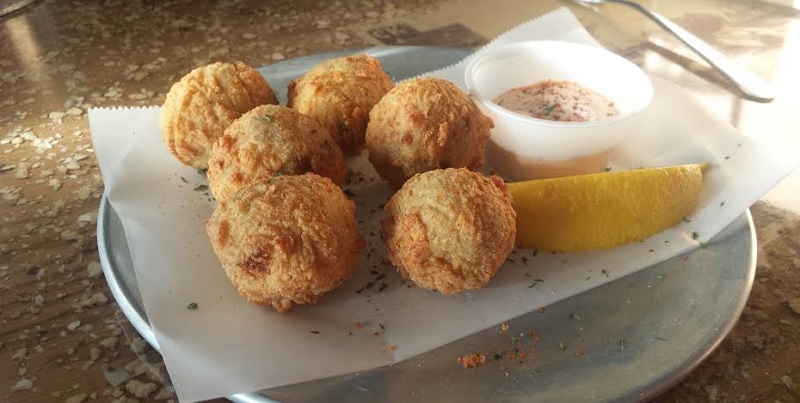 Other best-sellers are the lobster rolls and blackened mahi tacos.

“And, since we’re an oyster bar, we obviously have to have the best of the best oysters,” Brad laughed.

He explained to me that the oysters, freshly-caught shrimp and other seafood he serves come from different suppliers based on the time of year it is. All the seafood at Shuckin’ Shack is wild-caught in America, and as much as possible comes from North Carolina. “It’s seasonal – it’s all based on weather and working conditions,” he told me.

“The most important thing is to make sure it’s all wild-caught and fresh – that’s the key,” he added. “When you start bringing in stuff from overseas, it’s been sitting for a long time. It’s cheaper, but it’s not the same quality.”

I think the best way to eat our NC oysters are raw, but we can also steam them and pair them with our many in-house sauces. A crowd-pleaser for the folks who aren’t really oyster fans is a char-grilled oyster flavored with either jalapeno cheddar and bacon or parmesan, garlic and bacon.

If you want to try a little of everything, there’s always a special going on at Shuckin’ Shack.

“Our chicken wings are on special every day from 4-6 pm, and we always have some sort of sandwich lunch special,” Brad said. “Crab legs are $14 a pound every Thursday, Fridays are dedicated to lobster and we also have Taco Tuesdays.” Salads, chicken fingers and other non-seafood items are on the menu too. 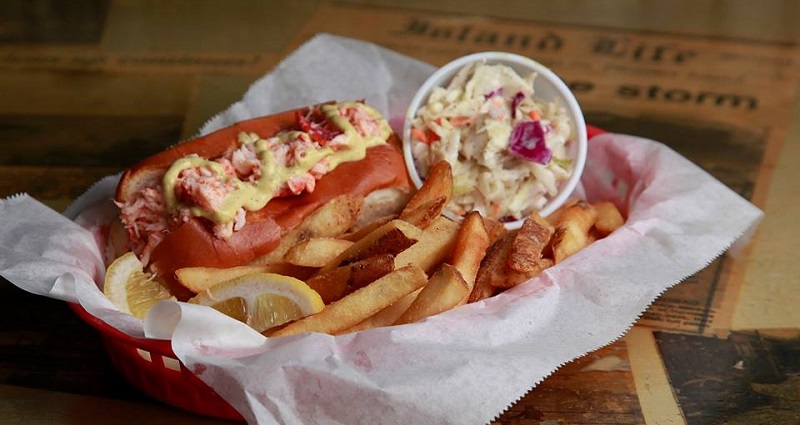 “I’m a beer nut, so we have a fairly fancy beer system here,” Brad said.

Shuckin’ Shack has 40 some craft bottles and cans and a list of different wines. Brad also told me about the scratch-made cocktails, which all contain fresh ingredients. I want to try the margarita, which is made with Shuckin’ Shack’s homemade sour mix – lemons, oranges and limes muddled up with simple syrup. Brad recommends the peach sangrias and Bloody Marys, too.

Shuckin’ Shack already has a group of local fans and followers.

“I’ve been pleasantly surprised at the number of customers who have come in because they know about the original Shuckin’ Shack,” Brad told me. “I thought it was just my friends in the area who loved it as much as I did.”

As the restaurant grows, Brad will plan some fun events. A grand opening will be in about two-three weeks (stay tuned), and plans are also in place for a November Oysterfest and and an oyster-shucking contest. Readers can like Shuckin’ Shack on Facebook and keep reading Food Cary to stay up-to-date on all oyster happenings.

The History of Groundhog Day