Cary, NC — This was a typical week in the mayor’s office.

Monday, I contacted all council members about concerns or questions they may have had about the upcoming regularly scheduled meeting on Thursday. There were only a few questions about the summary of the October mini-retreat.

Later in the day, I joined Mayor Pro-Tem Yerha and council member George in a meeting with management, legal, public information and administration to go over the agenda.

Our meeting was rather short, and we anticipated the council meeting would be short as well.

After the agenda meeting, I had my weekly meeting with the Interim Town Manager and Assistant Town Managers. We discussed a variety of items, including the Academy Streetscape project, which has now fallen behind schedule. Soon, the council will be presented with a choice to close the Academy and Chatham intersection for an extended time with a short duration OR to have incremental closings for a longer duration.

Another topic discussed was the Belle at the Jones House restaurant. 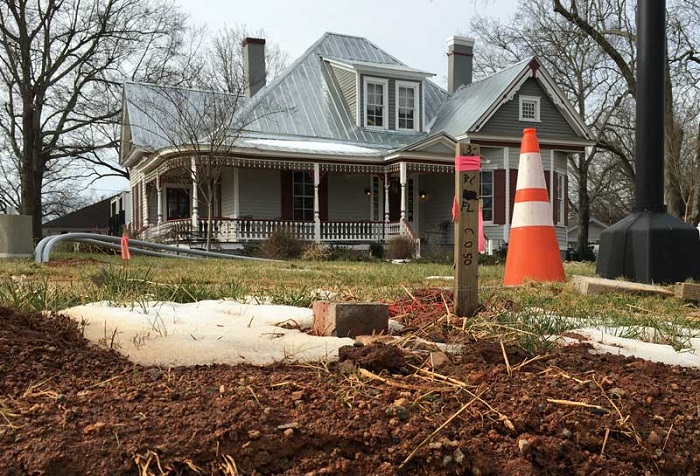 Staff let me know that the owner is now in breach of her contract, so the town will be able to start looking for a new tenant. On a positive note, there seems to be a lot of interest in our downtown area from office to retail to residential to all of the above. I believe we will have some important announcements within the next few weeks.

Tuesday I joined many council members, business leaders and others in a viewing of the new Mayton Inn, which is a four diamond boutique hotel in downtown.

In my past, I traveled for a living and visited many hotels. I can positively say that this hotel is very nice and will be a huge addition to our downtown revitalization. Even the outside looks wonderful, contrary to the naysayers who said the scale and style of architecture would not fit in downtown. We are excited that the inn is in our downtown and look forward to its success.

Wednesday, I spoke at the Triangle Community Coalition along with Mayor Bell of Durham and Mayor Olive of Apex.

The Triangle Community Coalition is made up mostly of realtor and developer interests. Initially, I was told we would be making presentations to the group. But, instead, we did a Q&A for about an hour.

Mayor Bell of Durham talked about affordable housing and transit, which are the current big issues in his city. Mayor Olive talked about growth issues similar to what Cary faced about ten years ago. My answers focused on infill, redevelopment and the partnerships needed to make that happen. There was an expressed interest in partnering with development and concerns expressed over the mall site and Cary’s eastern gateway. I estimate that there were several dozen attendees.

I spent a little over two hours with the group.

Thursday, the council held the first regularly scheduled council meeting of the month.

The agenda was short with two public hearings and two discussion items.

Council unanimously approved economic incentives for Kellogg, the prioritization of budget items from our October mini-retreat and funding for the purchase of land for a future firestation. The meeting lasted about 20 minutes, and then the council went into closed session to discuss the appointment of the town clerk and town manager positions.

Friday, I attended a Mayors Association outing at the PNC arena to watch the Carolina Hurricanes.

Saturday, I attended the grand opening and ribbon cutting of the Mayton Inn on Academy Street.

Here are some of my remarks:

This project began in 2012 with Town Council approving the economic development agreement to move this from an idea to reality. We believe that, to see our Downtown grow, it takes both the public and private sector working together, and The Mayton Inn is a positive example of this.

There are many aspects of this project, but I would like to highlight that this represents over 12 million dollars in private investment and will create at least 40 new jobs in our downtown.

I am also pleased to know that the developers of The Mayton Inn, Colin and Deanna Crossman, are also the owners/operators and will become downtown residents once they complete the renovations of the Mayton House located behind The Mayton Inn. You all have invested a great deal, and I want to thank you for your time and investment.

I am certain you are aware that Downtown Revitalization is ongoing, as you walked through some of the construction of the Academy Streetscape Project just outside. In addition to replacing over half a century old utilities, we’ll also be improving the pedestrian experience of Academy Street with wider sidewalks, benches, decorative lighting and public art.

The Downtown Park is under construction and will be a wonderful amenity to South Academy Street as a place for concerts, events and community gatherings. The new Downtown Library is planned for construction just to the south of the Downtown Park and east of the Cary Arts Center and will be a Regional Library with approximately 24,000 square feet. It will be open more days and hours to serve its patrons.

The project will include a public parking deck with approximately 350 spaces on the site with the new library that will serve the library, the Cary Arts Center, the Downtown Park and future development we anticipate around the Downtown Park. Town Council has been and continues to be committed to the revitalization of our Downtown and are starting to see that commitment paying off through the private investment associated with The Mayton Inn.

After my remarks, I joined the Crossmans, the council, chamber members and investors for the ribbon cutting. I believe this day will be looked back on as a pivotal moment in the rebirth of our downtown.

Sunday, I was at White Tiger Taekwondo on Maynard Road for a Puppapalooza event.

The purpose of this event was to bring the canine communities together. It was a fun-filled, family-oriented event that included contests, talents, training demonstrations, therapy dog reading programs, Q&A on caring for dogs, an adoption group and much more. I was a celebrity judge along with three others, including WRAL’s Linda Loveland. Being a judge was an absolute blast, and the dogs were a hoot. If you missed it this year, make sure to put it on your calendar for next year, because it is a must see. Unfortunately, I was only able to stay two and a half hours.

Cary received another great accolade this week. 247 Wall Street named Cary as the #6 best place to live in the nation.

Here is their summary of Cary:

Moreover, when adjusted for the city’s low cost of living, that figure increases by about $4,000.

Cary has one of the most educated populations nationwide – nearly 62% of adults have at least a bachelor’s degree. The nearby Research Triangle Park (RTP), a corporate research center located between UNC-Chapel Hill, Duke University and NC State, employs much of Cary’s qualified workforce. Only 3.7% of the city’s workforce is unemployed.

A bulk of Cary’s workforce works in or around RTP, and just 3.7% are unemployed, one of the lowest unemployment rates of any city. Cary is also one of the safest places in America. In the past decade, the city’s population grew 44.9%, one of the largest increases nationwide.

You can read more in the online article.

Cary receives dozens of accolades each year, and it is great to have this one as the first of the year.

Emails from staff this week included an announcement about a new community art project kickoff. The Cary Arts Center is inviting the public to participate in an exciting new Community Arts exhibit titled “Your Door to Cary.”

This will be a collaborative community project creating public art for a temporary installation in Cary using the original student locker doors obtained during the renovation of the former Cary Elementary and Cary High School into the new Cary Arts Center. Local artists have been invited to express their interest and submit initial ideas this month. In addition, the Cary Arts Center would like feedback and ideas from the community. This feedback will be collected and shared with the artists to help shape the various themes in the final installation. More details about how the public can participate and share their stories about Cary can be found at “Your Door to Cary” on the Town of Cary website.

Other emails from staff included the Construction Activity Report for January. Here are some of the notable items:

See a map of all the developments in Cary.

The local newspaper printed an opinion from one of the naysayers of our downtown investments. By the way, this handful of folks has pretty much disagreed with anything and everything we have proposed and done in downtown. According to them, everything is a waste of taxpayer dollars. Some people really don’t understand investment and what it means.

I believe that, without the town’s (taxpayer’s) investment, the arts center would have had structural failure years ago and would have had to be demolished. The same goes for the historic Jones House. The Cary Theater would still be boarded up. There would be nothing in downtown to go to. I am sure most of all the businesses would have left and blight and crime would be predominant. I thank God that I have had to privilege to work with great council members over the years that have the vision to see what Cary could be. And we are finally seeing those investments pay off in our downtown. So I gladly accept the misinformed, short-sighted opinions of those who really don’t have a clue.

Well, that is all for this week. My next post will be on Sunday, February 21st. Although I have Facebook and Twitter accounts, those are not the best means of communications with me. Please send all Town of Cary questions or comments to Harold.Weinbrecht@townofcary.org and email personal comments to augustanat@mindspring.com.