Raleigh, NC — The Carolina Hurricanes celebrated the 10th Anniversary of winning the Stanley Cup with a shootout loss to the Pittsburgh Penguins 2-1 on Friday night (February 12, 2016) and a resounding 6-3 win over another divisional rival, the New York Islanders, on Saturday, February 13, 2016. More on the business end of the weekend later.

The Hurricanes are a first class organization, and, while the frigid weather didn’t cooperate, the Canes had three days of recognition for the team – and the fans – that brought home the hardest trophy in sports, Lord Stanley’s Cup. All of the NHL trophies, including Cam Ward’s Playoff MVP Conn Smyth, were on display. Many of the players from the 2006 team were present and were signing autographs and posing for pictures while mingling with their faithful Caniacs.

Before the Islander game, there was a short ceremony that was nicely emceed by TV voice John Forslund, in which the Canes brought out the Stanley Cup and posed for a team photo before Team Captain Rod Brind’Amour made a short speech acknowledging the team effort back in 2006 and the great support from the fans.

During interviews, every player mentioned the tailgaiting, the decibel rating getting higher every game that no player has ever experienced and how the fans stood for the entire game. Being there was an experience to remember and one that anyone who was present wants to experience again. Doug Weight, who was a key acquisition on the 2006 team, is now an assistant coach for the Islanders and took part in the celebration.

Matt Cullen currently plays for the Penguins and was given a great round of applause after being recognized. Many former players had Jumbotron messages, and the Canes also paid tribute to Josef Vasichek, who was killed in September 2011 when his Russian team plane crashed, killing all on board. Anyway you look at it, the Hurricanes are a Class Act.

The Celebration Weekend ended with the Annual Alumni Game. This is where fans can pay to play with all monies going to the Kids ‘N the Community Foundation. The game and parking is free and had to have the largest attendance for the event. John Forslund does a live play by play, which could double as a skit for SNL.

Not that it matters, but, in the end, Team Red beat Team White 11-8. Every player, whether it was a retired Cane or amateur, commented that it was a great experience they’ll remember for years. The smile and words from Bret Hedican about the kindness, enthusiasm and memories he experienced were so genuine and sincere. He’s always had a real soft spot for the Hurricanes. For any hockey fan, make plans to attend the Alumni game next year.

Check the CaryCitizen in early 2017 for the date.

Now, on to the business end of the weekend.

The Canes entered the game just three points out of a wild card playoff spot, so every point counted. The Canes have had good success against the Penguins in the past, but were beat 2-1 in a shootout. Getting the one point was little consolidation after dominating the game with Jordan Staal shutting down Sidney Crosby. This seemed to frustrate Crosby, because friendly pats against the shin pads got harder as the game went on. The Penguins started out with six quick shots as they were coming off a 3-0 loss to the Rangers and, while they were in a better playoff position than the Canes, they needed points. 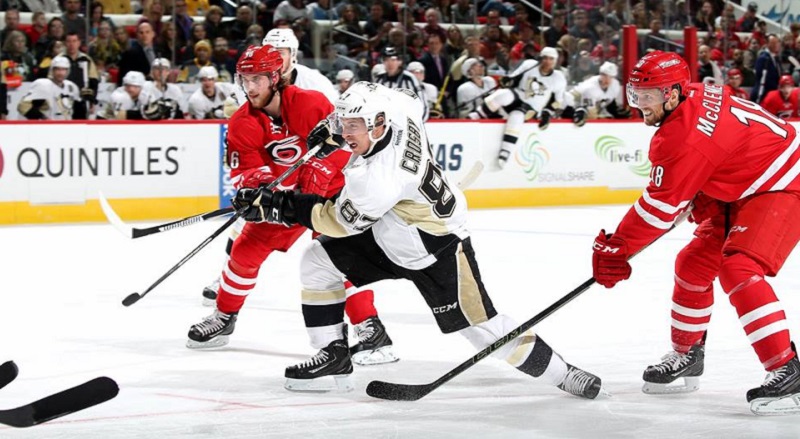 Cam Ward was sharp stopping every shot and had his patented no-rebound in check. The Canes’ offense started clicking and was sending rubber from every angle. Marc-Andre Fleury was also on his game, changing some “Oh, that’s a goal,” to “No way, we were robbed,” saves. After the first period, you knew from what was on the line this was going to be a goalie battle.

Cullen Still Has It

The second period was a carbon copy of the first as far as tight-checking, fast play and both goalies still playing lights out. Just under the 16 minute mark, the Pens had the puck deep in the Canes’ end.

Former Cane Matt Cullen went behind the net, passing to sniper Phil Kessel inside the faceoff circle to Ward’s right. Kessel wasted no time sending a one-timer off Ward’s hip on the short side in for the 1-0 lead. The Caniacs let the Pens’ fans do their thing, but, after the ensuing face-off, the Caniacs responded somewhat reminiscent of 2006. The third period still had both teams taking time and space away and both goalies still rock solid. Around the 15 minute mark, the Canes tied the score.

John-Michael Liles brought the puck into the Pens’ zone, passing over to Joakim Nordstrom who made a quick pass to Andrej Nestrasil inside the left face-off circle. Like the Kessel shot, Nester wasted no time, sending one high glove side to tie the game. The 3-on-3 overtime started slow, but the last three minutes were pure fun to watch. Fans were into the OT big time – standing, shouting, oohing and aahing. With no team scoring, the ugly shootout took place with all three of the Canes missing on pitiful shots and Kris Letang getting a classic move past Ward for the win.

After the great pre-game ceremony honoring the 2006 team, there was some serious hockey business to complete. The Islanders are in a good playoff position, but, at this time of the season, for any team in the playoff hunt, every point is important. Jordan Staal was assigned the tough assignment to check John Tavares, who, like Crosby, is one of the league’s top four pure scorers year after year. Late in the first period, Jay McClement was down below the Islanders’ goal line and then passed to Riley Nash in the left face-off circle. Nash sent the shot high short side for a 1-0 Canes point.

After that point, Nash let out a shout that was heard up on press row.

If anyone went to get a beer or soda in the second period at any time, they missed a goal. If anyone wanted to see more scoring, they were in heaven in the second. Just over the four minute mark, Noah Hanifin was on the left point sending a hard shot in front of the net. After bouncing around, the puck that was initially given to Nestrasil went in.

After, a video review awarded to Hanifin. A little over five minutes later, the Caniacs were treated to one of the prettiest goals of the night. Phil DiGiuseppe had the puck along the far boards and then made a phenomenal cross-ice pass just north of the crease to Kris Versteeg, who was crashing down the right side and didn’t hold back on sending one in for the 3-0 lead.

It was déjà vu all over again another 80 seconds later. Joakim Nordstrom carried the puck down the left wing into the Isles’ zone, lifted a beautiful saucer pass over the defender’s stick right to Nestrasil’s tape and buried it home with intent. It was déjà vu for the Caniacs, with the arena getting louder with each goal. Tavares and Nick Leddy got the Isles back in the game with two goals in the next four minutes. The Canes needed to take back control, and having a 4-on-3 powerplay was the answer.

After Victor Rask and Elias Lindholm played catch, Rask took a couple of strides and then sent a wrister, with Jaroslav Halak making a pad save. Rask picked up the rebound and faked going around the net. Then, with a drag move, he softly put the puck just inside the post. On Rask’s next shift, just 1:21 later, Rask increased the lead to four after a pass from Di Giuseppe.

It was a great period of five goals, but it was costly, as it appeared that Ward hyperextended his right leg after making two saves in less than a second. The Isles added one in the third to close out the scoring for the 6-3 final, a solid team win.

The next home game is Tuesday, February 16, 2016 against the Winnipeg Jets. Be there!