Raleigh, NC — It’s hard to dominate a game and get frustrated at the same time, but that’s how the Carolina Hurricanes must have experienced their evening game on Tuesday, February 16, 2016 with a 2-1 win over the Winnipeg Jets.

From the first drop of the puck, the Canes clearly dominated play in every aspect of the game – offense, defense, power play, penalty kill and neutral zone control. Just seeing the team chemistry on each line was evident.

What was frustrating for the Canes, and Caniacs alike, was knowing that, even with how much they dominated play, they were only able to score two power play goals, coming up with zero goal even strength.

Victor Rask won the opening face-off , and, from that play until the final whistle, the Jets seemed to be out of gas as every one of the Canes were out-skating their opponents. With Jordan Faulk still out with a lower body injury, the rest of the defensive squad stepped up their play. Ron Hainsey, in particular, was a beast, manhandling anyone in a white sweater on his side of the blue line. When the right opportunities arose, the defense jumped up for an extra man on the rush.

None of the young defensemen are considered a ‘stay at home’ type, and all fit in well deep in the offensive end with an awareness to retreat to the blue line if nothing developed.

Elias Lindholm was doing what he does best – banging bodies and being aggressive on the puck. In part of his retaliation, he drew an interference penalty, giving the Canes their first man advantage of the night. 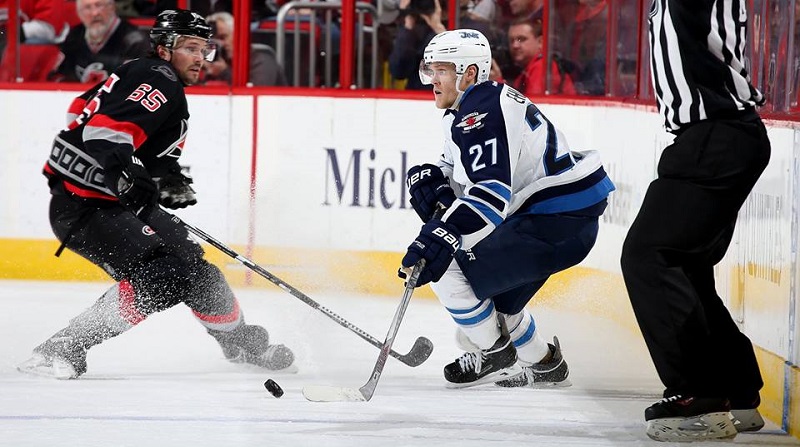 With the puck methodically being passed at will around the perimeter, Riley Nash passed over to Elias Lindholm on the left point. Lindy took a few strides to the goal and had Jordan Staal in front of the crease but, rather than shoot, he passed to Staal as he went to the goalies’ left.

Staal snared the puck then sent a nifty backhander over the sprawling glove hand of Ondrej Pavelec for a 1-0 lead. Uncharacteristically, the Canes took three penalties in the period but successfully killed them all off.

The Canes played a better disciplined period in the second by not taking any penalties. For the second period in a row, they kept the Jets to just four shots on Eddie Lack. At about the midpoint of the period, with the Canes on another powerplay, Lindy passed over to Noah Hanifin on the left point. Hanifin sent the hard slap shot 60’ to the net with Pavelec making the chest save but couldn’t corral the puck against his pads and let it drop to the ice. Both JStaal and Nasher took swipes at the puck with Nasher getting his stick on the puck first and sending it between the keeper’s legs for a 2-0 Canes lead.

Jets Get On the Board

The Jets finally got off the ground in the third period by getting off 13 shots with one getting past Lack just under the seven-minute mark spoiling the shut out. The Canes won 35 face-offs while losing just 16, which is a team’s lights-out statistic.

Andrew Ladd, a personal friend of a few Canes, the captain of the Jets, a member of the Canes 2006 Stanley Cup team and a class player took a silly offensive zone while cross checking, which was systematic of the level of frustration of being stymied by the defense and lack of the Jets’ offense abilities. Overall, the coaches can be mildly pleased with the win.

A win is a win, but scoring 5-on-5 is a must if this team wants to continue playing after the first week in April. Yes, the Canes are “oh so close” to a playoff spot, but getting there is more than in their own hands. Not just a few, but several, teams in front of them have to have some serious losing streaks. The Canes are playing some very good and enjoyable hockey, but, as Nathan Gerbe says, “This is the NHL. You have to play every shift 100%. There is no slacking off at this level. You have to make an impression every second on the ice whether it’s in front of your goal or in front of their goal.”

He needs to patent his advice and make his intensity and effort contagious.

The next home game is Friday, February 19, 2016 against the San Jose Sharks. Be there!